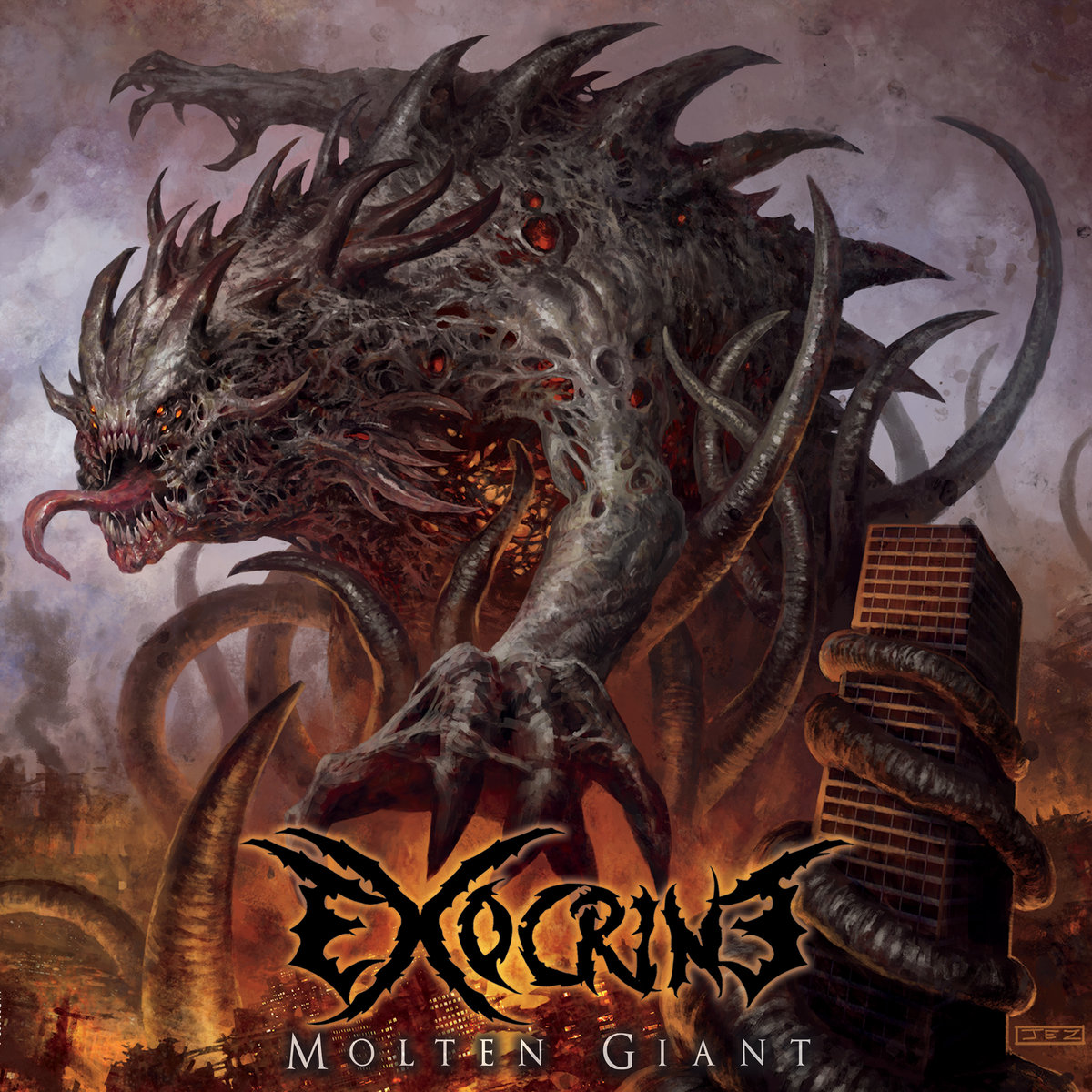 All technique and little content, Exocrine’s Molten Giant offers a dizzying display of tech death guitar fireworks without much substance.

I ended my review of Exocrine’s 2017 Ascension album with a plea that France send us more stuff like that album. The Bordeaux band must have missed that memo. Because while Ascension was an elegant and exciting tech death album, Molten Giant is a show-off-y romp of guitar overindulgence and fancy playing; furious sound that signifies nothing.

Molten Giant’s only semblance of artistic unity seems to come from it being a concept album about the kinds of giant ‘kaiju’ monsters that used to be popular in Japanese movies. The album’s closer, “Shape of New World”, has an actual film score feel in its intro, but it degenerates into Molten Giant’s dominant mode (pun intended) of dizzying guitar fireworks, played fast. They add in some grooveless slow parts and acoustic moments to break up the greyness of it all, but those just serve to set up the next round of flourishing scales and modes, played and overplayed. Even standout tracks like “Backdraft” do not make Molten Giant less tiresome to listen to: a solo here, a lead there, speed up; mix, repeat, done.

A lot of this comes from genre-induced artistic limitations. Genres and subgenres by definition are limiting: by defining the limits of which labels can be used to classify certain kinds of music, they force artists to focus their strengths in artistic expression. This in and of itself is not a bad thing. It does not mean that bands should not try different styles at all, merely that the arbitrary limitations imparted upon bands by their chosen subgenres can hardly be used as excuses for weak material. And this is where Exocrine and Molten Giant come into the picture. Tech death is not a terribly limiting patch of the metal quilt (e.g. unlike deathcore). We had excellent albums this year by Obscura and (especially) Rivers Of Nihil. Those two bands sound as different from each other as either band can be said to sound from Exocrine. The latter band simply went ahead with the ‘technique’ aspect of it all and left out any life, any spark, any ‘zazz’ that can make something sound unique and exciting. All we have on Molten Giant is a collection of leads and solos played with impressive virtuosity. But speed and virtuosity alone do not make for a great album that is enjoyable to listen to.

Or to put the Obscura and Rivers Of Nihil comparisons into perspective, it is very easy to see how a tech death fan could love one and not the other. Well, I am here to tell you that I love both of those albums but I really cannot bring myself to love Molten Giant. Exocrine tried to make their debut on Unique Leader Records into a bold expression of their talent. They have talent in abundance. Of that there is no question. But what they really need is a sense of artistic direction.

I must end this review with a new plea to Exocrine, the band we know to be capable of greater things than Molten Giant: ‘Mais pourquoi, mais pourquoi?’