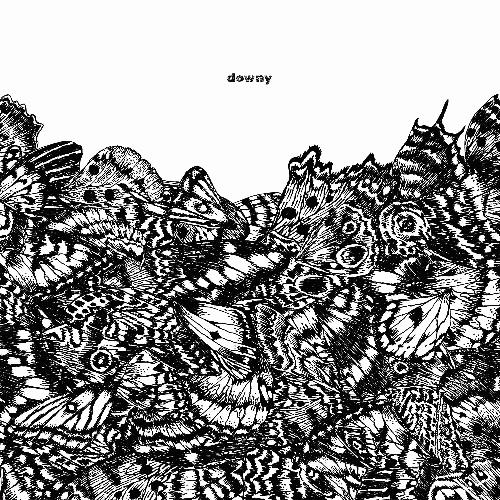 Downy‘s seventh, Untitled record is a beautiful marriage of electronic music and emotional post-rock. Listen and let your mind drift.

Although everyone here at Everything Is Noise consumes a lot of music, we all have bands that are near and dear to us. Of course we do, it’s only natural. But reviewing such a record isn’t easy, as your own bias plays into your view and obscures your vision. With that being said, I have the pleasure and the unfortunate duty of reviewing Downy’s seventh record, Untitled. You see, Downy are a band I’ve held dear for years now, always being in awe of their progression, maturation, sonic world building, and overall sound. Once again I cannot help but love this their newest record as well.

One strength of the band has always been their ability to condense and reduce different caprices into a single track full of complexity. It’s almost paradoxical to be able to hone in on an emotion like that to concisely build a track around it, yet stretch its themes out into such a rich palette. This time around it seems to be no different. Untitled starts with the epic “Contrapposto”. This track is a good first impression of the record, as it clearly outlines a lot of the vibe the upcoming songs have. While prog rock seems to be the main course, the side dish consists mainly of electronic influences, even bringing contemporary stylistic devices like risers and downers into the music.

In “Contrapposto”, a piano sets the stage, with a heavy reverb on it that dissipates into an even grander reverb pad that’s in turn running through a bitcrusher (meaning it’s distorted and its sample rate is reduced). This bridges analogue and electronic territory in a stunning yet cohesive way. Evolving pads in the background sometimes pulse and glide at others, bringing lots of headspace and a sense of vastness into the music.

In the first half of the track, the vocals are half-sung or flat-out spoken, but they’re always being modulated and seem out of phase, reminding me of a futuristic aesthetic to an extent. When the drums come in the momentum of the track is tripled, bringing some upbeat vibes and a drum’n’bass pattern with them. Meanwhile, our piano wanders further and further into the background, seemingly melting with the distorted pads from earlier. A synth lead is introduced at this point, playing at break-neck speeds and thereby solidifying the epic feel of “Contrapposto”. So, to reiterate, we encountered analogue drums in an electronic style, epic synth leads, modulation for days, cinematic piano, and a myriad of layers all in a single five-minute track. I must say it’s rare to hear the intro to a record be this grand.

I was all the more surprised when the follow-up, “Haze”, delivered an even stranger sonic meal. Here, a noise rock attitude with underlying pragmatism seems to be the main theme. We encounter similar background synths in this piece, albeit a lot noisier and more randomly contorting. The layering of the vocals seems chaotic at times, almost as though two different tracks have been merged. “Haze” is very careful not to overdo any of its stylistic choices that could feel overbearing, though. Near the end of the track we’re given another pleasant, somewhat jazzier synth lead. Quite fitting for the track, this synth seems a little hazy, as if it’s double-tracked and gently distorted with a light fuzz.

Looking back at both of these tracks, I want to reiterate my initial statement of Downy catching a very specific emotion in a single track. Both of these songs have incredibly strong feelings, even though they are completely different. This means that cohesion is decidedly thrown to the wayside in favor of creating a fully developed sonic world in their songs. Think of it as an anthology series where the the characters are recurring but never as the same person and the stories only overlap in tiny references that are quick to vanish.

Another important aspect of the record is modulation and effects. As the tracks “Good News”, “Sugar Cube”, and “Pianoid” so vividly display, effects are chosen carefully and can sometimes play a major role in the structure of these tracks. While “Good News” seems to simultaneously run forwards and backwards, like a music piece frozen in time but never pausing, “Sugar Cube” takes sidechaining to its logical extreme. For those who don’t know, a sidechain is a form of compression where an audio signal is ducked (made quieter) while the audio, to which a compression is sidechained, plays. In this example, the whole track suddenly cuts out whenever the bass drum hits. “Pianoid” is quite the opposite. Sustain and feedback take the lead here, giving the notes a noisy edge and drowsy lengths. All of these songs would lose an important part of their identity if you’d take away the effects. While this may ring true for multiple bands, the way Downy set these pieces’ scenery makes it especially noteworthy.

While I could go on and on about the record, I really want everyone to listen for themselves and not take away the wonder of each and every track. Retrospectively, I have to say that this is more of a love letter to the culmination of Downy’s works. The album stands under a dark shadow, though, as it is the first after guitarist Yuttaka Aoki’s death. I felt this expressed in the album through the bleakness of the music, as it is one of Downy’s most melancholic works. If this is a goodbye, it is a beautiful one.