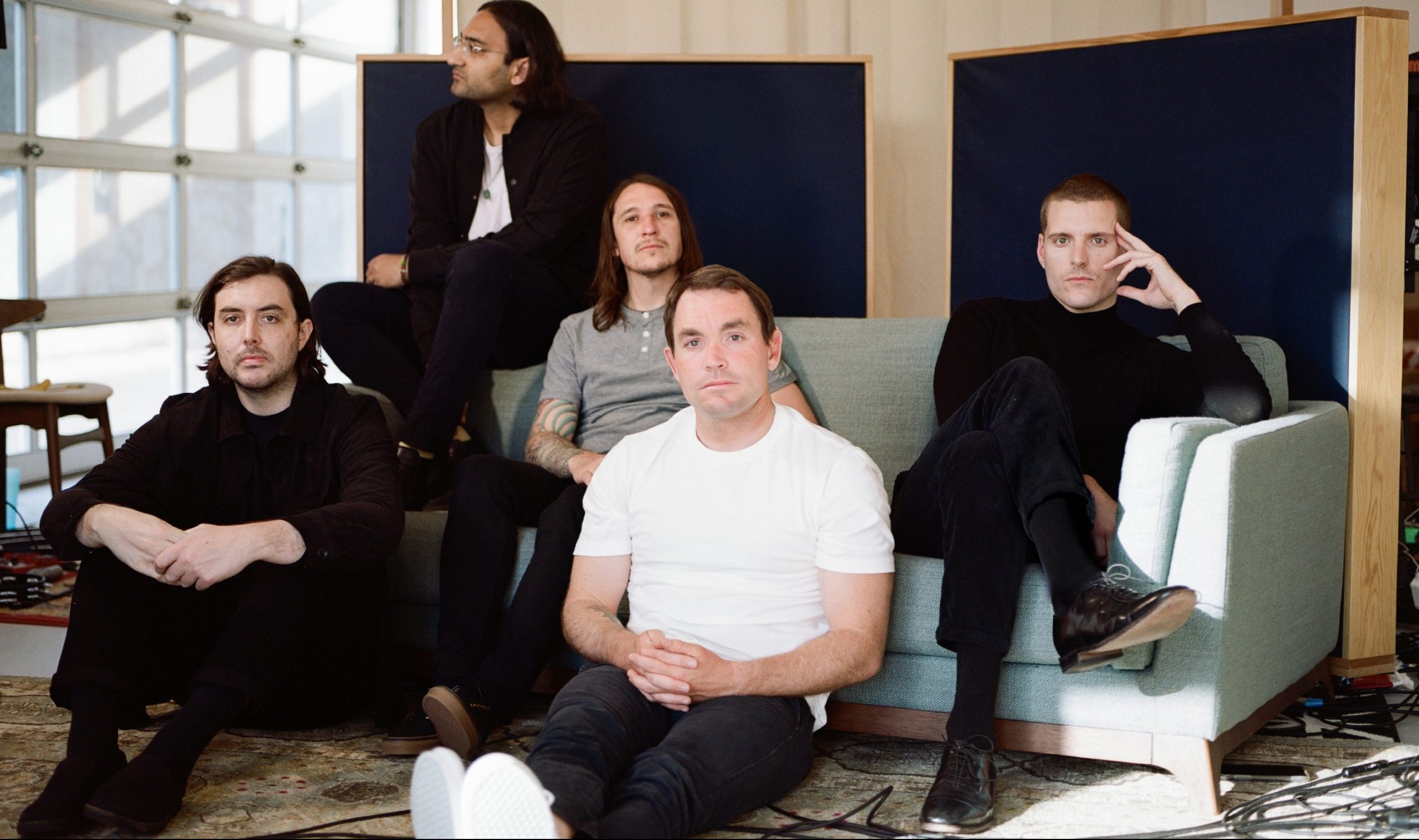 After reinvigorating themselves and realizing their full potential on Infinite Granite, Deafheaven makes you die inside, in the warmest and most comfortable manner imaginable.

Deafheaven are one of those bands who you don’t necessarily just listen to, but feel as well. And I mean truly feel, on a profound level that’s extreme in scope and exceedingly difficult to explain to anyone else, even more so if you’re trying to forge that sense into the head of someone who isn’t familiar with them. On each of their albums, the band has offered you a unique experience that is pretty much unparalleled yet always multidimensional, and as they reinvent themselves once again on Infinite Granite – that fact remains unscathed.

I’ve been a fan of the band since the release of their widely acclaimed sophomore album Sunbather, which myself and a few fellow writers discussed in-depth some weeks back on our A Scene In Retrospect feature, and while that particular album perhaps struck me the most on all levels, its follow-up New Bermuda has more or less been my go-to out of all of their discography, possibly due to its tones being darker and rougher. After these impeccable releases, Ordinary Corrupt Human Love flew over my head for quite a while, and even though it has found its way to occasional rotation in this household, it still feels like it didn’t quite attain the excellence of the previous albums. Once the first single from Infinite Granite followed suit in not really grabbing me the way I wished it to and a certain uneasiness settled in, I still felt like I had to reserve the album for a review in order to oblige myself into listening to it, and to allow for it to unveil itself to me with a better schedule than the previous one. And you know what? I’m really fucking glad I did that.

The reason why the first single, “Great Mass of Color” felt out of place to me, and probably to some of you, was that in order to fully showcase its potential, the track needed proper context. And that context is made very, very clear right from the beginning of the opener “Shellstar”. You instantly recognize the band’s signature dreamy shoegaze, post-everything inclinations, but the sense of substantial change is equally present, not the least because of the clean vocals dominating the atmosphere. This monumental change was met with mixed reactions upon the release of the lead single, but I’d say it’s all for the better, as the purist attitude has never been anywhere near Deafheaven‘s circles of interest, and this remarkable shift can be seen as somewhat of an expected move anyway. The thing is, George Clarke is an exceptional singer, and no matter how hard one might try to argue against it, the reality of it still stands firm. “Shellstar” already demonstrates this effectively, and personally I was so floored by the vocal performance that it overshadowed everything else during my first few rounds with the album.

The instrumental aspect, however, also shines on its own, as the tracks on Infinite Granite are structurally and compositionally the most interesting ones the band has produced in a long time; in fact, I’d contend that most of the songs here present the finest edge Deafheaven have ever offered, with the examples being ample. The band has never struggled with cohesion to begin with, but on Infinite Granite, this rather important stance soars to new heights altogether. The album is more than a sum of its parts, and thus appears as a one colossal entity meant to be experienced as a whole. In that regard, it also requires more attentiveness and stamina than usual, and I can see how that could equal to a draining and weighty listen for some. Still, I don’t think that it’d come as a surprise for anyone, even less to those already familiar with Deafheaven‘s immersive sound vortex-esque ways.

Following the opener with “In Blur”, you can already sense how the album’s overall tonal arc is expertly contained but simultaneously floating. The warm atmosphere keeps you enthralled with its alluring nooks and crannies, and the built-in dynamics come into play through this very sentiment. The hooks are plenti- and bountiful, but used sparingly and with caution, the end result being that you can never predict when the next one will hit. A good example of this are the nearly abandoned screamed vocals that surface very rarely anymore, but strike unbelievably hard when they do. Like in the culminating points of “Great Mass of Color”, bringing back those blackened bawls feels like finally seeing the lights glaring from the windows of your home after wandering in darkness for a good while. This is also what I meant earlier when I said the track needed context, since that massive ending actually concludes the first fifteen minutes of the album, and not only the track itself. Followed with the retro-synth mood piece “Neptune Raining Diamonds”, the mentioned unexpectedness rears its head again, and as a listener, you can’t wait to find out what the rest entails.

“Lament for Wasps” is the first in a set of songs that truly define the band in their current aural form, hitting like a ton of bricks with its affirmative and positive ambiance. The track has the kind of open-endedness that was teased but not fully brought to the forefront during the first ones, and it’s all the better for it. The massive crescendo carried onwards with some sweet double-kick action is the sonic equivalent to jumping off of a cliff with a smile on your face, only to glide endlessly above a beautiful scenery lit by the setting sun. “Villain” upholds this feel-good upbeat vibe, being perhaps the most engaging out of all of the songs on Infinite Granite. The ending, not too dissimilarly to “Great Mass of Color” and its preceding track, builds on and on to reach a colossal conclusion, led by screams dictating a wall of sound that is just so damn enjoyable in all of its ear-shattering glory. Continuing on a distorted note after some strange echos, “The Gnashing” stays mostly all-in but utilizes some quieter moments to keep the momentum alive, representing the most interesting and varied angle to be found on the album as a whole.

After this onslaught, “Other Language” is a breath of air and relative calm, with brisk bass tones, strummed acoustic guitars, and driving drum beats and fills painting details into its overall subtle aesthetic. The choir-esque vocals and a bigger last part already have a sense of ending to them, and during my first couple listens, it took me by surprise that the album didn’t actually end here yet. The final track “Mombasa” takes its sweet time to unfold, starting with wind samples before picking up the pace with the most beautiful clean passages of the album, filling the listener up with all kinds of varying emotions. This goes on for a good while and then… blast beats? Yeah, so that happened. When I least expected it, the band just went their way to fill my eardrums with a few minutes’ worth of the blackgaze battery they’re perhaps the most known for, leaving me with a puzzled state of mind. Deafheaven pretty much pulled the rug out from under our feet for an album’s worth only to end on the most familiar note possible, but why? My best guess is that they decided to take some sort of a perverse counter measure to everything they just presented you with, and interestingly enough, it doesn’t feel out of place at all. If anything, it only fuels the fire of expectancy to what’s coming next.

Infinite Granite puts its listener through a lot, and it’s all the better for it. Deafheaven has never catered to any expectations or assumptions, and I have nothing but the utmost admiration towards them and their mindset of doing things the way they see fit, and somehow pulling it off every single time. While I was personally left with a few gaps unfilled when it comes to needing certain aggression and bleakness, it’s alright. I have to appreciate the band moving forward, and it’s not like there wouldn’t be plenty of material with those particular leanings in their discography already. The thing is, Deafheaven reinvented their own spiritual wheel, presented it in its most honest and palpable form imaginable and did one hell of a job with it – no one can dispute that. You can try to do it if for some ungodly reason you should want to, but I don’t think anyone really cares.