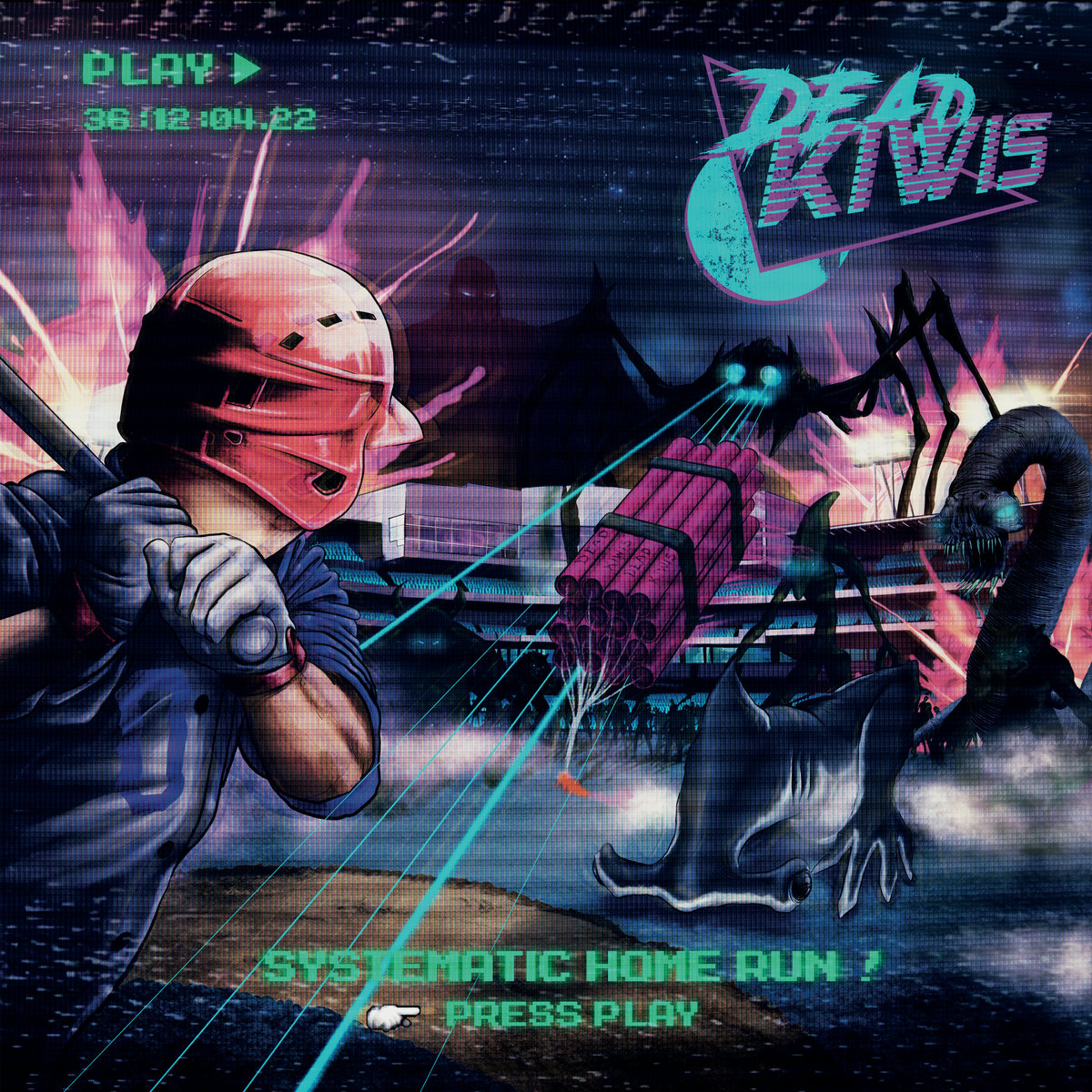 By Robert MiklosMarch 8, 2019 No Comments

Dead Kiwis seem hellbent on packing all the punches in the shortest possible time. There just isn’t enough water on this planet to douse the fire which Systematic Home Run is.

Dead Kiwis is a mathcore band from Lyon, France. They’ve been around for at least five years, since the only indication to this is the release date of their debut album. Systematic Home Run is the rightful successor of Karate Karnage and their third album. We’re definitely being treated with some improvements and also some striking differences compared to their previous albums.

I want to start by talking a little about the artwork. It’s lit, is it not? It’s a baseball match that’s being played with (or against?) monsters and instead of a regular ball, there’s a bulky bundle of roman candles or dynamite sticks. The filter that’s applied to make it look as if it’s displayed on an old TV gives it a special nostalgic edge. If a systematic home run is the aim of the game – destruction will most definitely ensue in copious amounts.

Compared to its predecessors, there are three remarkable aspects that put Systematic Home Run above Karate Karnage and Eponyme. First of all, the ever-dwindling running time is now down to a mere quarter hour (a minute shorter than its predecessor). But as things get shorter, they also exponentially grow in intensity. Second, the production value appears to be at an all-time high. Everything is tighter and louder without compromises on fidelity. Yet, there’s enough looseness to give each instrument appropriate amounts of expression, so as to not sound sterile. Everything just works great. Last but not least, arrangements are bordering on free-jazz and pure chaos, whereas the former works adhered more to the classic hardcore style of putting things down.

Now for the actual tunes, “GIANT X1000” is one of the most misleading openers I’ve ever come across. It’s basically what you would hear on a synthwave album. Then, as the guitar feedback seeps into the ending, it alerts the listener of a certain incoming bundle of dynamite. “ROCK” follows said feedback into a torrential outburst of frantic, reckless, and devastating aural rampage – suddenly finishing off just as it began. This is aptly followed by “ZEBRAS OF BEELZEBUB” during which we get more of the same. With the notable distinction that there’s more groovy riffing going about, giving everyone some sort of reference as to how to bang their heads.

“LA MAÇA” aptly continues the mood that has been set. “THE REVENGE OF THE 666 RŌNIN” slaps back, hearkening to the introductory song, but only to break at halftime back to where we were left. “THE ALMIGHTY REKTOS” wastes no time and churns away like a tidal wave made of shrieking, explosions, percussive instruments and various other things. The way in which this album just ‘waltzes’ in and throws music theory out the window makes me grin. “ROCKET KNIFE” is easily the highlight of the album, bearing a very appropriate title. It showcases an unabridged desire to flood everything in sight by means of sonic destruction, which is so sweet. The ending track, “ULTIMATE RUSH (MONSTERS OF MADNESS)” pretty much wraps everything up with no departure in tone. Wow, what a ride!

Dead Kiwis are one of the few bands that manage to patch up the wound caused by the disbandment of The Dillinger Escape Plan. They do so, reminding us of acts like The Armed, The Chariot, and many others. They take along with these other acts, the torch of math infused madness to new soaring heights. Looking at their track record, I’d say the only place these guys are going is forward and beyond. Systematic Home Run may look like a grindcore album by track lengths, it may look like pure parody based on the artwork; but actually it looks like one of the most entertaining records of this year so far.