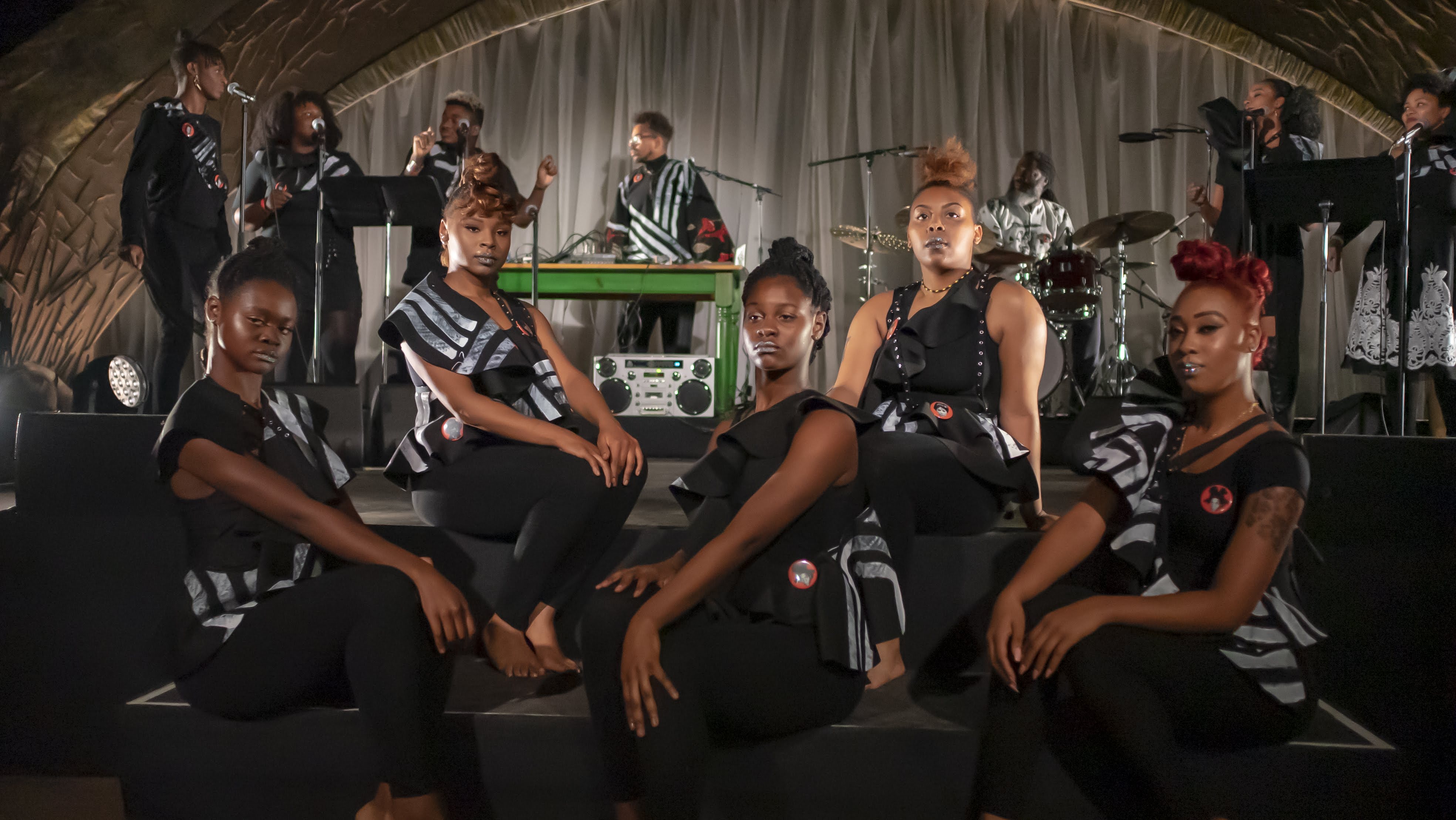 Where Future Unfolds by Damon Locks Black Monument Ensemble is a mighty jazz & gospel album made up of a stunning live recording of a band that challenges the hard-hitting subject matter with powerful eloquence.

Psychedelic bells greet the listener when starting Where Future Unfolds by Damon Locks Black Monument Ensemble before distorted vocals are brought into play. The powerful metaphors rattled off by Damon Locks in the first track “Statement of Intent / Black Monument Theme” compliment the intense bells and draw you into this exciting music. The bells remind me of Pharoah Sanders, and most recently, Maisha, who both employ them to imbue their jazz with a lysergic acid feel.

The freeform drums which start to build behind the voice escalate,  and the message being delivered gets clearer and more aggressive. The message drives home why the former and current US governments are failing the people, and why institutional racism means that things won’t change. The song finishes by replacing the intense mantra, with a gospel choir repeating the powerful last lyrics of the song.

What started as a solo project by Damon Locks evolved from samples overlayed on top of a drum machine, into a vast live ensemble, complete with dancers. Recorded at a live performance by International Anthem, the record gives you the full scope of the band’s music, from the aforementioned psychedelic jazz, all the way through to the 808 beats which break up the album nicely. It took four years to get to putting a recording down, but those four years have not been misspent.

What is presented to you is an album that puts your emotions, good and bad, into a cocktail mixer and shakes them up continuously. The gospel, break, and jazz influences get you moving, but the lyrical content hits home hard, offsetting the great mood diffused through the instrumentation and vocal styles. You’ll find in track two “Sounds Like Now”, that the message delivered decries the seemingly endless police killings, but could also be applied to the school shooting endemic in the US too. The lyrics make you stop and take a moment to consider the gravity of the message from the first listen.

“Sounds Like Now” is a gospel-focused track, that plays off simple backing music, with the message thrust front and centre. This song contrasts heavily to “The Future” later in the album, which is full of Avante-Garde jazz, with the artists allowed to go off on a tangent. You get smatterings of what sounds like improv throughout the album, interspersed throughout songs, making each and every track an exciting sonic experience.

The gospel singers are what really makes the album for me. Alumni of the Chicago Children’s Choir, the spread of voices are brilliant. You move from rich and mighty female vocals to the strong and hopeful voice of a young man who leads the way in “Rebuild A Nation”, each adding different flavours of emotion.

One of my favourite tracks is the closing act to the album, “From A Spark To A Fire”. Starting with heavy drum hits and an electronic feel, you’re soon awash with the gospel vocals again, which spew a thick, atmospheric mantra over you. Here, the psychedelia is real, this song is heavily offsetting and rich with layers. Live it must’ve been incredible, making it feel like you’re in the middle of a vocal storm with voices jumping out from all around.

The often stripped back sound of the instrumentation offered throughout Where Future Unfolds is what really lends power to the vocals. With more of a ruckus behind the choir, this album might not have been as sonically appealing and striking. Thanks to the messages contained within, this album should be shared and played on major media formats and celebrated for its great musical and lyrical content. Damon Locks Black Monument Ensemble should be proud of the work they’ve created and I really hope they get to play more across the US and for their message to be heard. The hopefulness imbued within the tracks is uplifting and makes you understand that whilst there is an uphill struggle towards equality in the States, by using a positive attitude, it can be accomplished.