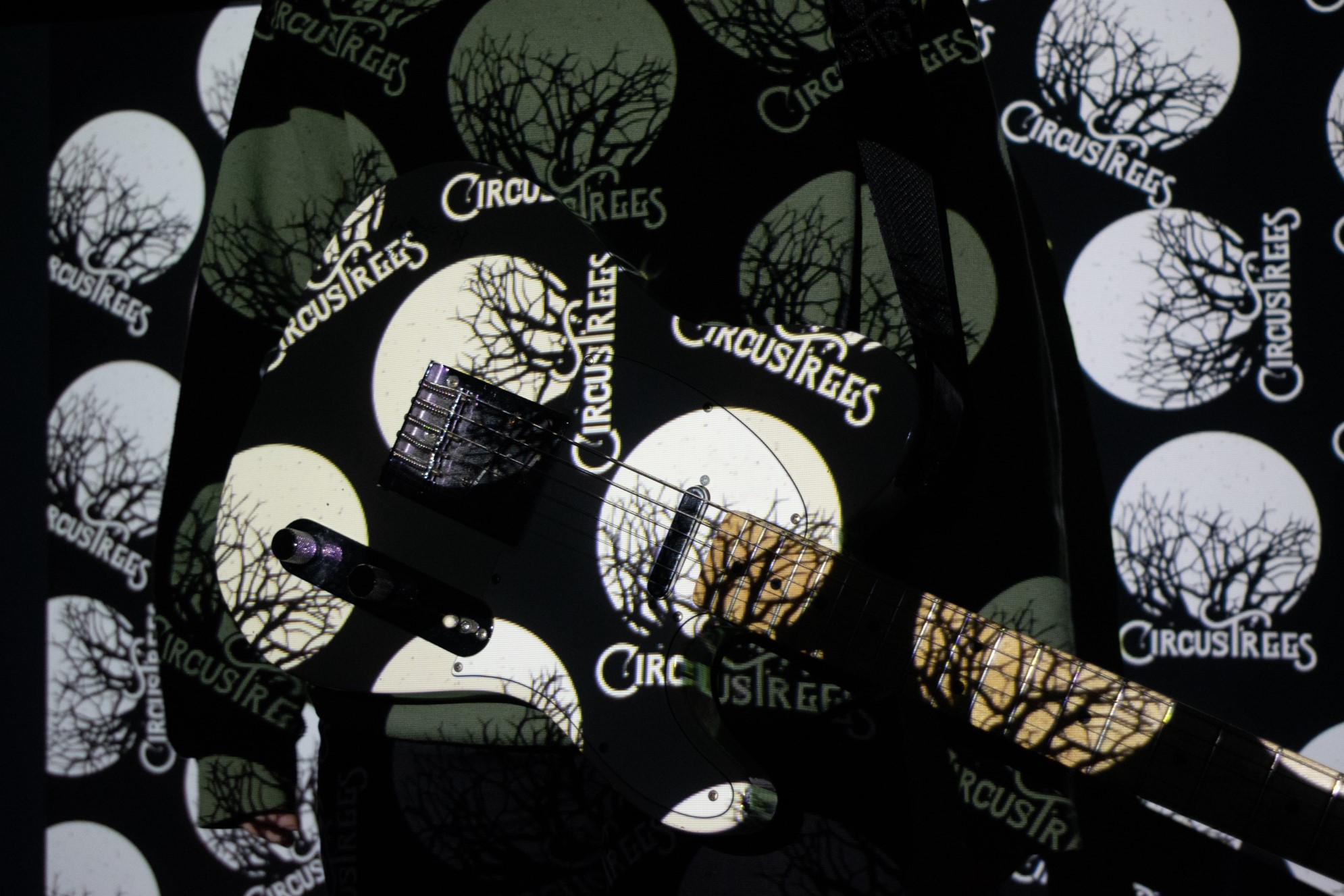 By Shaun MilliganAugust 13, 2020 No Comments

Through the crushing musical power and honest lyrical nature of Delusions, Circus Trees provide remarkable depth and a comfortable, enveloping space in which to embrace the profoundly relatable sadness of pain.

Settle in, because this may be the most wholesome thing you read this month. Interest not piqued? Read on anyway – partly because the music kicks arse, but mostly because the story of Circus Trees brims with warmth, unity, and encouragement: qualities that some would argue the world is a little short on right now. The trio comprises sisters Finola, Giuliana, and Edmee McCarthy. Unlike fellow sibling three-piece HAIM, these three paint from a distinctly sombre, heavy musical palette. In a generally male-dominated area of music, the McCarthy sisters stand out with a compelling blend of formidable gaze, expansive post-rock, and the sort of homespun, doomy tones that give everything a disconcerting yet charming edge.

After a string of shows and festival appearances last year, alongside the likes of o’brother and Holy Fawn among others, established peers such as Caspian (audibly influential in the band’s pensive intensity) took increasing notice of the band. Guitarist Erin Burke-Moran even sported a Circus Trees t-shirt for their entire 2019 tour. This was capped off by a nomination for ‘Best Music Act’ at the Boston Music Awards. Not an insignificant year for the trio, by any means.

But we are here to discuss full-length debut Delusions, a successor that fully outdoes last year’s Sakura EP – which was admittedly a gem in itself. Aside from short interludes of synth work and dialogue samples (courtesy of close family friend Aaron Garcia, the mind behind PLBK), these six tracks are pure sadcore, in the best of ways. While lyrically hard-hitting, musically speaking Delusions is relatively easy to consume – the kind of ease that reflects the payoff of intense effort, not that of an uninteresting outcome.

Kicking things off, “Wasted Air” defies its title by opening with an ominous audio snippet and keys lashed with uncertainty, before baring sharp teeth and revealing its true, distorted nature. It’s certainly a strong start from Circus Trees, and they go on to consistently deliver on their intentions long after the cavernous, wallowing close of, ‘Don’t waste your air on me‘ has rung out for the final time.

Venturing through Delusions, there’s actually a continuously hefty amount to take in, both in texture and tone – which is an impressive feat, given the modest forty-minute roster of songs it’s been compacted into. With many tracks breathing life well past the six-minute mark, even the longest songs boast the endurance and staying power to hold your focus from start to finish. That said, we are still afforded opportunities of momentary silence in which to reflect and respond. To a degree, Circus Trees are merely there to facilitate your introspection with their sombre sounds.

But when they want you back, they get you. Finola’s versatile, clear vocal melodies lend a humanity and fervour to the instrumentals, while Edmee’s thundering bass partners with meaty guitar parts to destroy any unwanted barrier between the band and your undivided attention. Across Delusions, both showcase an acute, lingering sensitivity during quieter passages, leaping to a gritty crunch when fully exploding to life. This is captured particularly well on “Wicked”, with its dynamic back and forth from distortion, and “Confronting Time”, where surprisingly uplifting chorus composition offsets bittersweet outpourings.

A key distinction from other decidedly melancholic songwriters is the compassionate way in which Circus Trees tackle what are often uncomfortable topics – certainly for those with firsthand experience. The sisters approach these matters with a mentality that seeks not isolate, but rather extend a hand of companionship that draws listeners closer:

‘This album reflects more introspection, and comes from the emotions felt personally from one or more members of the band…much less distant to us as individual human beings. We built these songs up from the ground…until we felt comfortable that the songs encapsulated everything we were trying to get across.‘

With Finola’s words in mind, the frank and emotive lyrics peppered throughout Delusions remain sullen, but with flourishes of comfort, as a range of human experiences are explored. “Breath” climaxes with a literal fall and rise in the shifting chords, echoing unstable sentiments such as ‘I can see your breath/’Cause I haven’t defrosted yet‘. Later, forceful final song “Till We’re Dead” flaunts Giuliana’s lumbering drumwork in full, as battered snares and crashing cymbals help construct blissful dissonance amidst emboldened calls of ‘I will make things right‘ and ‘We could make it/’Till we’re dead‘. Finola’s driven lines here certainly ring as a somewhat radical departure from those found earlier on.

By this point, the eagle-eyed will have no doubt noticed something unexpected about Circus Trees. Well, I purposely withheld a crucial piece of information, because – for the narrow-minded – opening the review with it might have hindered any willingness to embrace Circus Tree‘s music, which would be damned foolish. You see, the music above that you’ve hopefully checked out, that walks so confidently between the boundaries of profound empathy, uncompromising power, and impressive vulnerability?

Let that sink in. It’s okay, it took me some time, too. For further context, that homegrown aesthetic I mentioned previously stems from the fact that these amazing sisters write in the familiarity of their home – both a base of operations and of their label Five By Two Records, created by their father/manager. Yep, you read that right – their dad started a whole goddamn label just to help their dreams gain traction and get their sound out there. And it’s working. Moreover, their two brothers even assist with pre-show setup, occasional soundboard duties, and transportation to their various gigs. I told you it was wholesome.

Revisiting Delusions after such a revelation is an odd feeling. The album still smears doomgazey grunge everywhere, but I find each listen is now accompanied with involuntary smiles. That’s because the stirring, warm nature of Circus Trees‘ very existence and growth is inescapable, and this promising act have produced an undeniably passionate, polished record. I find the McCarthy sisters genuinely inspiring, and hope (nay, fully expect) that they’ll accomplish all they dream of and more, in what is sure to be a deservedly lengthy future for this incredible trio – and I’m under no delusions when I say that.