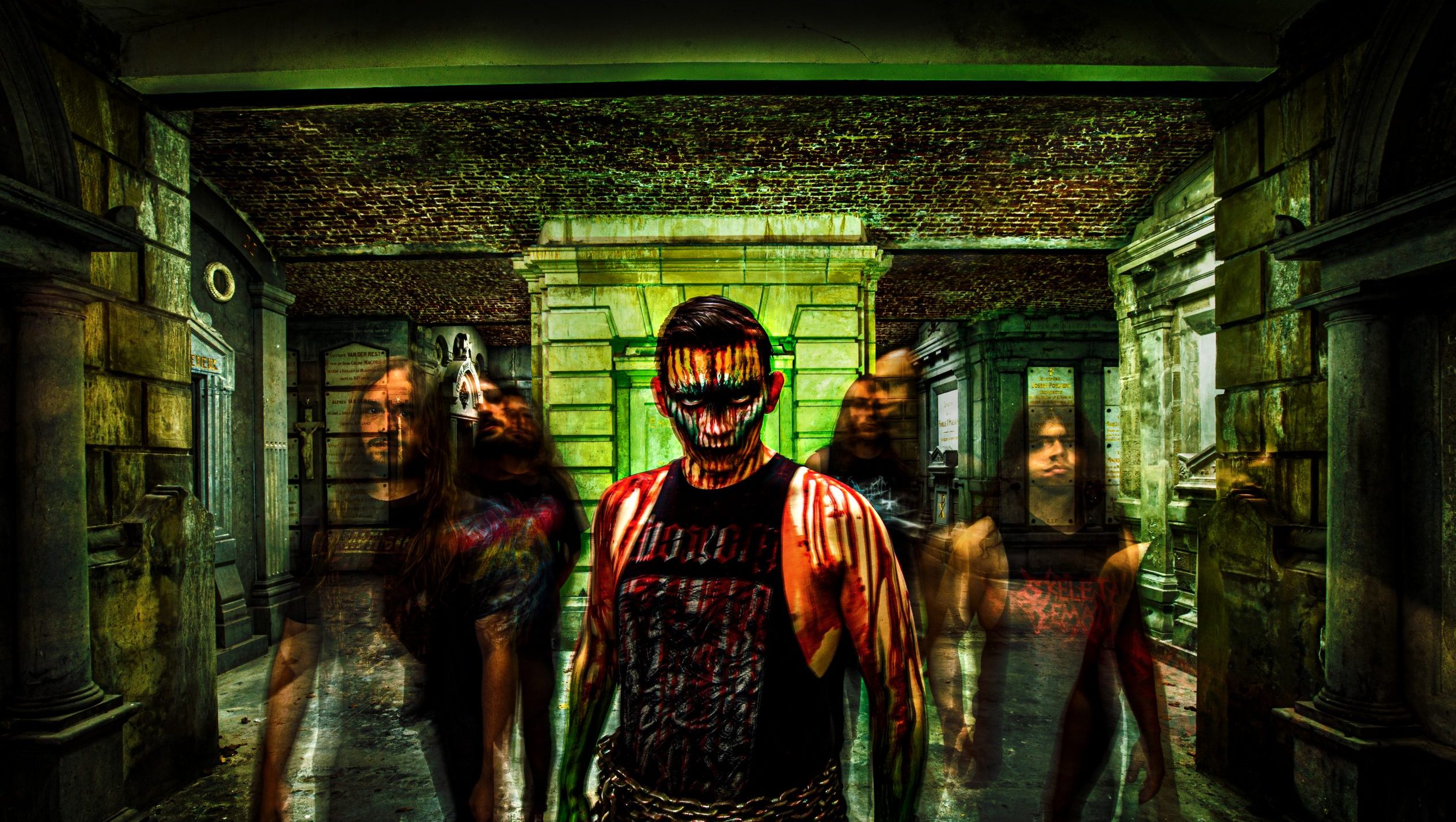 Brace yourselves for Carnation‘s second album, Where Death Lies, filled with grim death metal riffs and a generous dose of black metal.

Death metal is one of those things that I never really spent much time exploring, with a few exceptions. It was always one of those genres I considered myself ‘into’, though, because I think I knew that I would like it if I chose to delve into it. Back when I was younger and before I went down the progressive metal rabbit hole, I very much enjoyed some tech death as well as Death and Carcass, but it was only upon hearing Symbolic in my bandmate’s car recently that I remembered why I liked it so much. Not long after that, I was having some drinks at a friend’s house, and he put on some of his favourite death metal, more in the blackened direction: Bloodbath, Belphegor, Behemoth. I was intrigued further, and, after a week of intently listening to only death metal, felt ready to take on a review.

Carnation stood out to me. Their new album is called Where Death Lies – it doesn’t get much more old school death metal than that. “Sepulcher Of Alteration”, the first song I heard, remains one of my favourites, and, in my opinion, one of the strongest tracks on the album. It’s just an onslaught of furious tremolo picking, the glacial lead lines blackening it ever so slightly. This song still makes me screw up my face ever time I hear it, and it features one of the best solos on the album, too. While some of the transitions are rather abrupt, it is overall an extremely coherent and well-constructed song.

“Seplucher Of Alteration” is a very good indication of what Where Death Lies has to offer: lots and lots of riffs, attitude, grim lyrics, and many blast beats. The album as a whole is cohesive and has a strong sense of narrative – however, there are two things I have beef with. They’re very small, but they had a profound impact on me.

The first is a brief melodic interlude, complete with clean guitars and sung vocals (the only instance of either of these things on the whole album), right near the end of the closing track, “In Chasms Abysmal”. While the rest of the track is super cool, and I dig the grim simplicity of its chorus (‘You buried me in chasms abysmal/Where you stole my life from me’), this digression feels like a last-minute attempt at proving Carnation can create contrast, a half-hearted effort to appear sensitive. Team, your death metal kicks ass. This was not for me, and it didn’t add to the experience of the song in my opinion. I think it could’ve worked if the change hadn’t been so drastic – a section can be emotional and still feature distorted guitars and unclean vocals, a la Crowbar’s “Suffering Brings Wisdom”, for example.

But my biggest problem is the start of Where Death Lies’ penultimate track, “Reincarnation”. From a minute in, this track is a fucking dream to me. Its main riff is an absolute delight to my earholes; melodic, with just the right amount of black metal. The verses are bleak, and, while it does have some less-than-smooth transitions, I love all of the different riffs and sections in it – except one. I cannot, no matter how hard I try, come to terms with its intro. It’s a clever idea – the intro is based on the main riff (or vice versa), but it’s played on a pretty cheesy-sounding synth that sounds like something straight out of a Lindsey Stirling backing track, complete with string samples. Now, I’m not necessarily opposed to synths in my metal, I’m just extremely particular about them. For example, I don’t mind when the distorted guitars kick in on “Reincarnation”, and a lone synth pad remains, but I really dislike what Carnation have done in that intro. To each their own though.

The first time I listened to this album, I did find myself getting a little lost in the middle. I like music that’s a little unpredictable, and while the song structures were still different from song to song, I just found I wasn’t surprised by anything anymore. Now, though, every time I listen to it, the start of each track makes my brain light up and go ‘oh, this song!’ (yes, even the start of “Reincarnation”, because the rest of the song is sick as fuck). The album doesn’t lose momentum at all, I just have to be in the right mood for it. Patience most certainly is a virtue with this one; it has grown on me.

“Malformed Regrowth”, for example, is an excellent amalgamation of everything I love about both death and black metal. Starting out with a furiously driven riff and one of my favourite vocal moments on Where Death Lies, a drawn-out, demonic scream, it smashes through riff after riff; some syncopated and jaunty, others dark, gloomy, or wrist-achingly fast. It was only once I analysed it that I realised how odd the structure of “Malformed Regrowth” really is – it doesn’t feel strange at all, yet all of its verses are over different riffs, and most of them don’t repeat. This song is an onslaught, and it kept me on the edge of my seat for all of its all-too-short three minutes.

I was really struggling in the writing of this review, and I felt like I just couldn’t motivate myself to find the right words to describe it. It got to the point where I asked myself why I was even bothering when it was causing me so much stress – and the answer got me off my ass. I’m writing this review because what Carnation have done on Where Death Lies. While not groundbreaking, and while not always being to my liking, it’s really cool, and I want people to know about it. Plus, I think this album kicks ass, and there’s a lot to love about it. Let it become a ‘malformed regrowth’ on you.