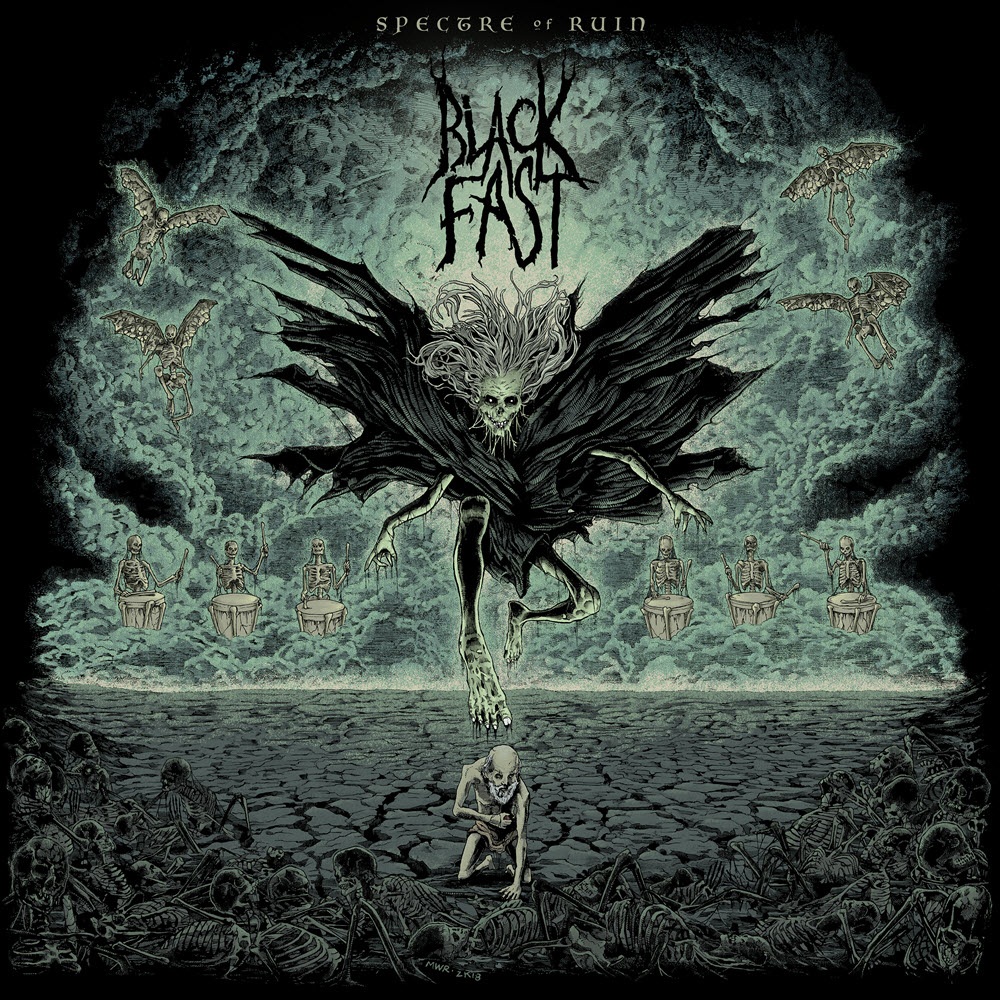 By David RodriguezJuly 3, 2018 No Comments

Black Fast are back, blacker and faster than ever with Spectre of Ruin, but the thrash band’s sound seems to have been corrupted and not for the better

Black Fast isn’t just a name, it’s a way of life for the quartet of thrashers from St. Louis. They play metal that is both blackened and fast. I’ve enjoyed their past work quite a bit, so I expected nothing else from them with Spectre of Ruin. While I definitely got what I expected in some areas, I couldn’t help but feel like the band made some concessions here that didn’t do the band’s sound many favors.

Let’s get this out of the way now: In terms of progression, technicality, and variance, Spectre of Ruin seems like a step backwards. For all the chaos captured pretty succinctly on the 43-minute album, it all feels dialed back a bit when compared to their 2013 project Starving Out the Light. There was some light progressive elements to that album that made it feel like diet Vektor (a compliment, just to be clear). Listen to the riffing and impressive movements from measure to measure on a track like “Levitations”, then listen to… well, almost any song off of Spectre of Ruin. It’s fact that the band’s newest material is capable of impressing as I’ll detail soon enough, but it’s impossible to deny that there’s a technical and compositional magic missing from this album. Also, the production is a lot more muddy here compared to previous efforts. Combined, this mars the record pretty hard if I’m being honest.

What Spectre of Ruin does command best is a high-energy experience. It feels weird to call Black Fast mood music, but it’s best enjoyed when you feel like getting pumped up or already are and want to keep the serotonin high. The current biography section of the band’s Facebook page promises ‘there isn’t a single clean passage, moody interlude, orchestral intro, or shoegazing break on Black Fast’s unapologetically destructive third album, Spectre of Ruin’. They weren’t kidding; as made evident from the first seconds of “Cloak of Lies”, the band isn’t here to screw around, which ticks the first box of many a thrash fan’s checklist. The violent rasp of the vocals calls to a higher pitched Chuck Schuldiner (Death; RIP). They definitely prove to be a highlight of the record. They’re consistent, much like the punchy drums. The double bass especially has thick thuds in the mix. Guitars are melodic by nature, but flail into screeching arpeggiated solos that ravage. The album hardly ever lets up from the first track to the last, and I truly admire that relentlessness.

Aside from the top-notch rhythm section, the other hook here is the dark atmosphere. Black Fast‘s thrash is now tinged with some thick, shadowy tones close to blackened thrash, but perhaps not as pronounced as that descriptor might imply. This has been their ‘thing’ since Terms of Surrender, their last album, which has a similar blackened aesthetic. But where that album committed more to one side or the other depending on which track you play, much of Spectre of Ruin sees the band consistently wash themselves out somewhere in the middle where no one side, thrash or blackened metal, wins. We do get songs like “Silhouette Usurper” which carries a foreboding weight with its quickly picked riffs and is generally nice, but it’s hard not to compare this band to their previous, and frankly better, material.

Black Fast are no doubt good at what they do, but there’s not a lot of room for innovation or dynamics in the direction they have headed in with Spectre of Ruin. It’s relatively straightforward, pounding, dark thrash. Before, they had earned a seat at the table along modern greats in the genre like Havok, Vektor, and Power Trip, but the perceived hesitation and lack of commitment to a cohesive sound has me thinking they have moved on from that. I’d like to see them purge themselves of some of the darkness in the future or at least apply it differently without sacrificing clarity and technique, but until then Spectre of Ruin is a serviceable slab of speedy riffs, mean vocals, and ripping rhythms.