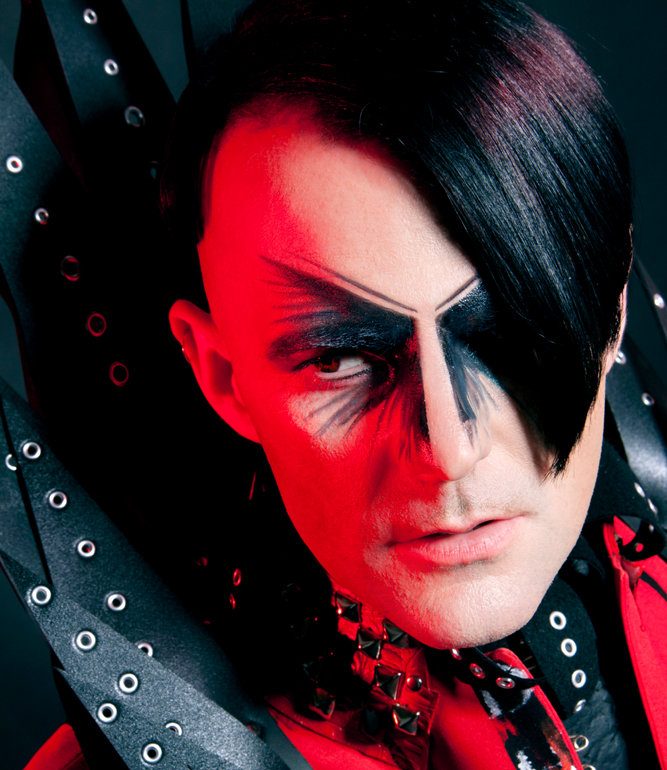 By Faisal BinzagrNovember 4, 2020 No Comments

With The Ignorance Cartel, Angelspit continue to reliably craft quality industrial dance tunes, this time pummeling a little harder than usual while functioning as an effective reconciliation of past and present sounds.

Whatever your reaction reading the lyrics above, what’s almost certain is that when you hear them sung on the chorus of “Ammosexual” – the second track off industrial act Angelspit’s new album The Ignorance Cartel – they will embed themselves into your brain and refuse to go away. This is the appeal of Angelspit… and it’s in their DNA by design. As ugly, atonal, crass, or abrasive as the band’s music can sound at times, there will always be a barbed hook hidden in there to pierce your eardrums.

Angelspit have been on the scene for a while now. Hailing from Australia (now USA-based), their 2006 debut album Krankhaus distinguished itself from its peers by sounding little like the Nine Inch Nails industrial rock imitators popular in the early ‘00s, or the metallic aggrotech that was beginning to take off around that same time. Angelspit stood out with their tribal percussive elements, monotone slam poetry vocal delivery, and colorful imagery that blended high fashion with body horror. They continued to fine-tune their signature combination, perfecting it with 2009’s Hideous and Perfect, before embarking on a series of deliberate stylistic experiments and line-up changes that would stretch into the next decade with interesting results. All of which brings us to their ninth studio album, The Ignorance Cartel.

It’s wild to think it’s only been a year since they released their previous album Bang Operative, an experiment in merging their core sound with synthwave. It was a solid effort – although in retrospect perhaps less memorable than usual, for not pushing their sound as far as the album’s immediate predecessors. This is relevant owing to the band’s proclivity as of late to identifying a theme or genre for each of their new releases, and molding their sound to it. Albums such as 2016’s brilliant Cult of Fake (which tackled dance music) were as good as they were for remaining unquestionably Angelspit, while shaping their identity around elements previously unheard (or seldom heard) in their back catalogue.

Ahead of its release, The Ignorance Cartel was marketed as ‘faster and heavier than previous releases’, and ‘a monster unfit for our times.’ While there’s a certain tongue-in-cheek tone at play here, that doesn’t make it untrue. This is perhaps the most aggressive album in the band’s discography since their early days, before they embarked on their more varied, experimental path. For the uninitiated, Angelspit excel at aggressive industrial music that doesn’t draw on heavy metal as the source of its intensity like many other brash industrial acts. There’s sonically little in common here with Ministry, Godflesh, or Fear Factory. Instead, aggression is achieved through a combination of distortion, thick percussive elements, blistering tempos, and hostile vocal chants. Think somewhere between the chaotic buzzsaw pop of early Sleigh Bells, the cyberized soundscapes of HEALTH, and the high-octane breakbeats of The Prodigy.

The Ignorance Cartel’s most distinguishing feature is its reconciliation of the newer elements introduced to their sound in recent years (particularly dance music) with the signature Angelspit sound of Krankhaus. Angelspit haven’t sounded this much like themselves in a while, and fans fondly pining for the good old days of “100%”, who might have dropped off after the departure of former lead vocalist Amelia Arsenic, will likely find much to enjoy here.

The record does manage to carve out a bit of an identity of its own on some of these cuts. For instance, album highlight “Hot Machine” is one of the most straightforward electro-party songs Angelspit have ever written, and it’s juxtaposed with the record’s most disturbing lyrical content. The track explores our rapidly developing facial recognition and robotics technology, and the implications these leaps have on consent. Elsewhere, “Spade” wouldn’t be out of place on a Collide album, and album closer “All Puppet No Master” takes a much longer time than usual simmering before reaching a contradictory conclusion, in which melodic vocal lines meet intensifying guitar crunch.

The album features a number of collaborators, notably Brian Graupner of Gasoline Invertebrate, Melody of Queen of the Static Opera, as well as frequent collaborators Miss Ballistic – each lending their vocals to several of these tracks. That being said, the mix emphasizes percussion, atmospheric haze, and sampled clangs and clunks over vocal clarity. This is clearly by design, and hits the ear really well. However, the result is that these guest vocalists end up slightly lost in the mix and feeling underused. Though I understand and appreciate the band’s growth over the years, I do find myself missing the vocal interplay of the Amelia Arsenic days, and this feels like a missed opportunity to double down on exploring that particular dynamic with a wider variety of contributors and timbres.

In several ways, The Ignorance Cartel functions best as an entry point for newcomers and older fans who might have drifted away long ago. Casual listeners who’ve stuck around over the years, or those who prefer Angelspit’s more experimental tendencies, might be less enthused. Regardless, anyone looking for an aggressive industrial album crafted to pack underground dance floors (that also has something to say) won’t find better than this. One thing is certain above all else: if you give them the chance, these tracks will get in your head and stay there.