By Shaun MilliganSeptember 17, 2018 No Comments

If your week is lacking a spring in its step, then Everything Is Noise have got just the pick-me-up you need. As we continue a schedule that’s jam-packed with promising premieres, it’s the turn of lo-fi, indie pop dreamers Blush Cameron (formerly COMPs). Back to soothe with a charmingly mellow sound, preparations for upcoming album Ambiguous World are underway, with its October 11 release through Flesh & Bone Records nearing. New to their music? What better way to become acquainted than a spin of today’s premiere, the official video for single “Friendly Face”.

This charismatic burst takes the existing Blush Cameron sound and stretches it further: an aspiration for any musical project that seeks lasting appeal and the avoidance of stagnation. Not content to sit within the comfortable confines of a wistful, gazey dwelling, there’s a lot to admire within the three-and-a-half minutes of “Friendly Face”. It carries a slightly grungier tone than other recent release “Politics of Love” – a track more akin to Blush Cameron’s ‘trademark’ style (a sound previously undersold by frontman Geoff Webb as ‘passable lo-fi power pop’).

In addition, the presence of guitar licks that punctuate the chorus alongside sweetened harmonies gives “Friendly Face” an addictive hook that’s not dissimilar to a chirpy Weezer on their weekend off. Coupled with an endearingly quirky video, it’s a song that just wants to get on your good side and stay there, with its coo of ‘A friendly face is all it takes sometimes’. Friendly is a more than adequate descriptor for this uptempo gem.

Concerning the album itself, Ambiguous World takes the German psychology term ‘sehnsucht’ as its inspiration. Going on to elaborate, Geoff said:

‘[sehnsucht is when] ‘an ambiguous emotional occurs.’ It’s like a bittersweet nostalgia for a life you haven’t lived. Or longing for an ideal alternative.’

By his own admission, it’s a feeling the artist encounters frequently. He goes on to explain that the songs for Ambiguous World are written from within its titular realm, as it were. ‘An emotional space that feels bittersweet, empathising with what my life could be while coming to terms with what my life actually is.’ As a result, the record has shaped up to be a treat for listening ears, with Blush Cameron’s process giving their audience full consideration in the creative process:

‘I try to stay out of my own way and let things flow until it feels right. I’m always trying to think ahead to where the song should go, and how I would want it to sound if it was someone else’s song.’ 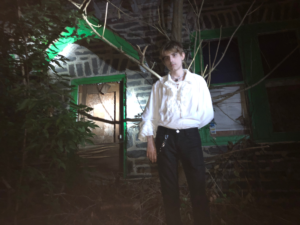 Ambiguous World will be released via Flesh & Bone Records on October 11. You can pre-order the album here. Why not also go ahead and show Blush Cameron some love? They can be found on Facebook, Instagram, and Spotify.