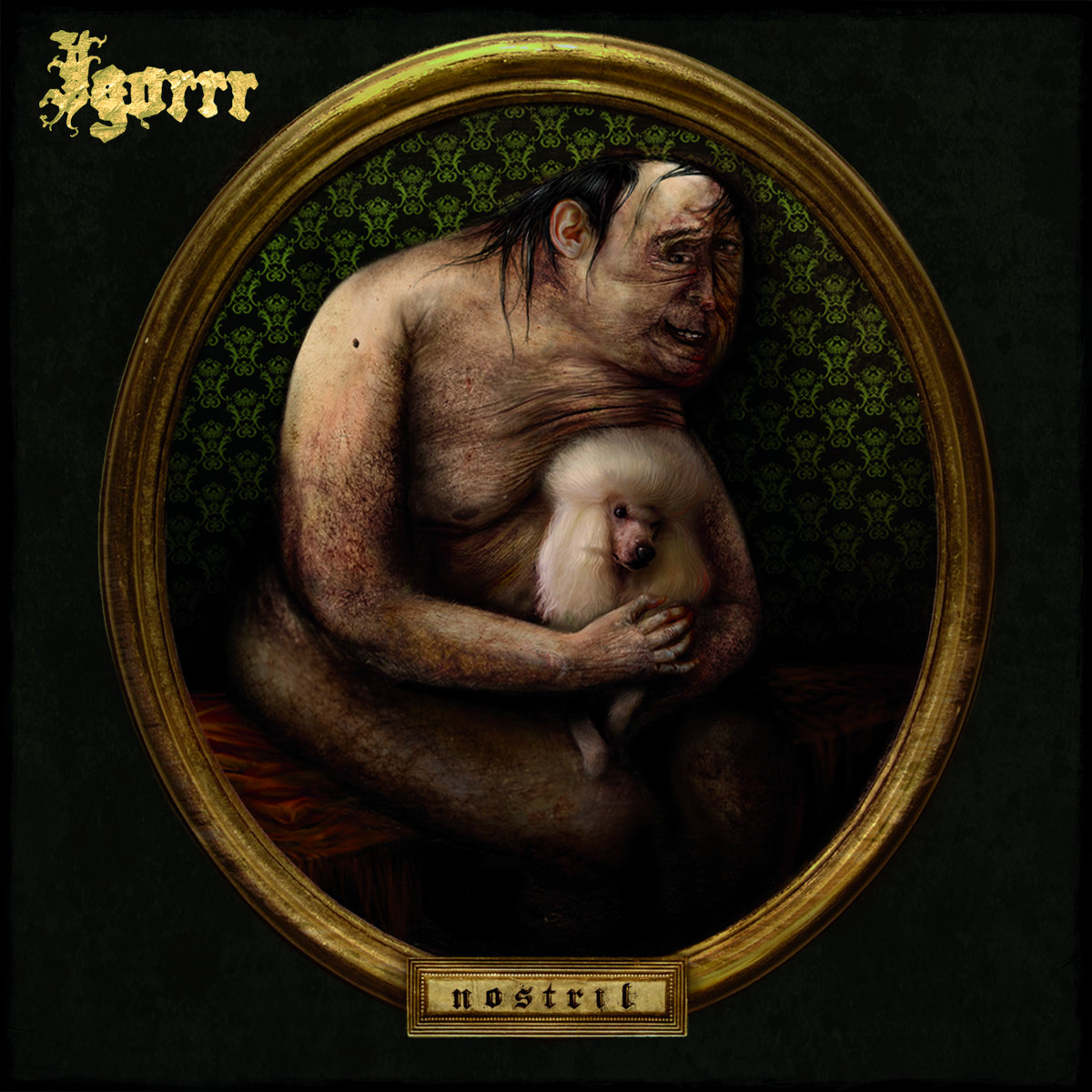 A SCENE IN RETROSPECT: Igorrr – “Nostril”

By David RodriguezJanuary 2, 2021 No Comments

New year, same us. We’re back with another ASIR feature, this time on one of Everything Is Noise‘s jointly cherished artists, Igorrr. Initially a solo project of French no-fucks-given avant-gartist™ Gautier Serre, it has since grown into a bigger affair with a bigger audience to a more mixed reception among diehard fans. Regardless, his earlier work was trailblazing in the truest sense of the word, which is why we wanted to talk about his 2010 album, Nostril. Hope you got a helmet over the holidays – strap it on and dive in with us.

Igorrr is a name that has become synonymous with absolute pandemonium and mayhem in music. You truly never know what kind of curveballs the avant-garde madman is going to throw at you, and this has been true for his entire career. While his album Savage Sinusoid is still wild and absolutely ‘out there’ by every metric, it was refined enough that I feel it brought a lot of new fans on board. In comparison to earlier releases, like 2010’s Nostril, it’s borderline accessible.

There isn’t much like Nostril in the world of music, and that is the very thing that drew me to this album in my sophomore year of high school. I was just getting into extreme metal, and I was also getting into drugs. I can’t think of any combination of things that would make Igorrr more palatable to be honest. I would get stoned with my friends and listen to California by Mr. Bungle on repeat, and then one day a good friend put on “Tendon” and told us to just listen. I was mesmerized, horrified, confused, and so intrigued that I couldn’t stop listening until I figured it out.

Ten years later, and I still have absolutely no clue what the hell Igorrr is, so maybe I haven’t figured it out. But after a decade, Nostril still holds up as an interesting specimen that broaches more realms of music than most people dare listen to, let alone create. The combination of discordant, out-of-tune strings with abrasive death metal and the mad scientist vibes of Igorrr himself make for one of the most enticingly unsettling experiences you can ever find in music. I mentioned “Tendon” earlier, but few things really capture the essence of this album like the final minute. The grating strings leading into the Korn-but-with-more-drugs scat and finally the full-on electro/bluegrass finale is buckwild as hell and something you absolutely cannot be prepared for.

There’s scary carnival music, classic baroque arrangements, dubstep, glitch hop, grindcore, a lot of screaming (both typical metal harsh vocals as well as just mad shrieking), and so much more. When I have friends ask me to show them ‘weird’ music, Igorrr is to this day the very first thing I go to. It’s hard to get much more weird than Nostril, but Igorrr is an absolute genius and he crafts his music so well that it just works somehow. I can’t think of many other experimental acts that I feel so strongly about, and I can certainly say none of them hold a candle to the craft of this chicken-loving supervillain.

Igorrr’s Nostril is a masterclass in how to combine metal, breakcore, classical, and whatever other tendency, viewed through an avant-garde lens in nothing short of a fluent manner. This record is not only unparalleled by the artist themselves, but also unequaled by anyone – or anything – else. What might add weight to that obviously self-proclaimed sentiment is that Nostril was the first effort I ever heard from this unrestricted French artist, and therefore it holds a special place in my heart. While Igorrr’s first two releases, Poisson Soluble and Moisissure, from some years earlier already had their own imprint (in hindsight), on Nostril, the artistic edge was refined and sharpened into its most cutting and striking form, and even though following albums have been on a heavy and steady rotation in this household as well, I’d say that none of those have quite achieved that same level of blunt idiocracy and ravaging sincerity that this particular one did.

Having still been a one-man project at the time, Igorrr furiously throws the listener into a maniacal whirlwind of contrasts right from the first seconds of the opener ”Double Monk”, and pretty much keeps exploring how far this musical canvas can be stretched from there on, until the last moments of the closing track ”Moldy Eye”. As an entirety, Nostril is like a confusing puzzle where none of the pieces have the same curves nor edges, yet they somehow fit together seamlessly to create a cohesive, albeit rather distorted, image of the act itself. I could go to great lengths to describe the stylistic leanings thrown into a single melting pot or try to come up with coherent genre tags to place Igorrr somewhere on the scope of pre-determined musical frames, but that would be a futile and redundant effort at best. You can’t describe something like this, you just have to listen to it.

Nostril is by no means easily accessible or approachable, but it’s damn rewarding once you get adjusted to the elegant cacophony and actually start to recognize all the crazy hues it envelops, when it opens itself up to you. I’m not going to lie, it took quite a few spins for me to really get into the album and to fully grasp it, even though the first listen already grabbed me to an extent that very few other albums initially have. One of the biggest factors to this impermeability is that when compared to the later albums that are publicly more renowned and actually pushed Igorrr into a wider fame and global recognition, Nostril is simply raw; visceral by production and highly punishing to the ears. To me, that’s exactly where the main appeal of this album and artist lies in the first place, but it’s understandable that it isn’t meant for everyone. But then again, why should it be?

In all of its musical freak-out glory, Nostril is first and foremost an oddly satisfactory experience, and strangely prophetic as such. If you can point me to another album that so eloquently sums up today’s humanity and mirrors its lunatic ways in such a spot-on fashion, please do. However, I doubt that there is any, not to this measure at least.

Okay, to set things straight, this is one of the most important records of my life. I was always interested in challenging myself with new things, and Igorrr‘s Nostril definitely changed my perspective on how to perceive music. Cacophony at the first glimpse, organized chaos if you immerse yourself in those 43 minutes of creativity without a leash.

Nostril was my first contact with French artist Gautier Serre, and I wasn’t into it at the beginning. But I was intrigued. This was something I’ve never heard before, and I considered myself an adventurous listener back then. I quickly discovered that there was a lot of beauty behind all the madness, and lost myself in the rewarding quest to really get Igorrr as an artist. Delving into his previous demos Poisson Soluble and Moisissure, the various layers Serre used to build up his music were challenging to navigate through, but oh so sweet to experience. The baroque theme which is prominent throughout most of his releases makes an interesting contrast with the futuristic breakcore execution, creating a twisted atmosphere. While the arrangements can seem random at the first glimpse, there is a nearly pedantic approach to Nostril, which sometimes takes deep breaths for contemplation until it devours your attention once again with its strange sampling and harmonies.

By now, Igorrr‘s a household name in the experimental music scene, and got widely exposed to metal fans thanks to his signing with Metal Blade Records. While the project deserves every bit of recognition, there is something missing. If you discovered the project through Savage Sinusoid or Spirituality and Distortion, I strongly recommend to get into the early works of Igorrr, especially Nostril. Maybe it will have the same life-altering effect it had to me. Regardless, you are definitely for a very special treat!

What are your thoughts on/experiences with Nostril? Are you a fan of Igorrr, and if so, what’s your favorite album of theirs? Do you have any records you’d like to recommend for inclusion in A Scene In Retrospect? Leave it all in the comments if you feel like sharing!