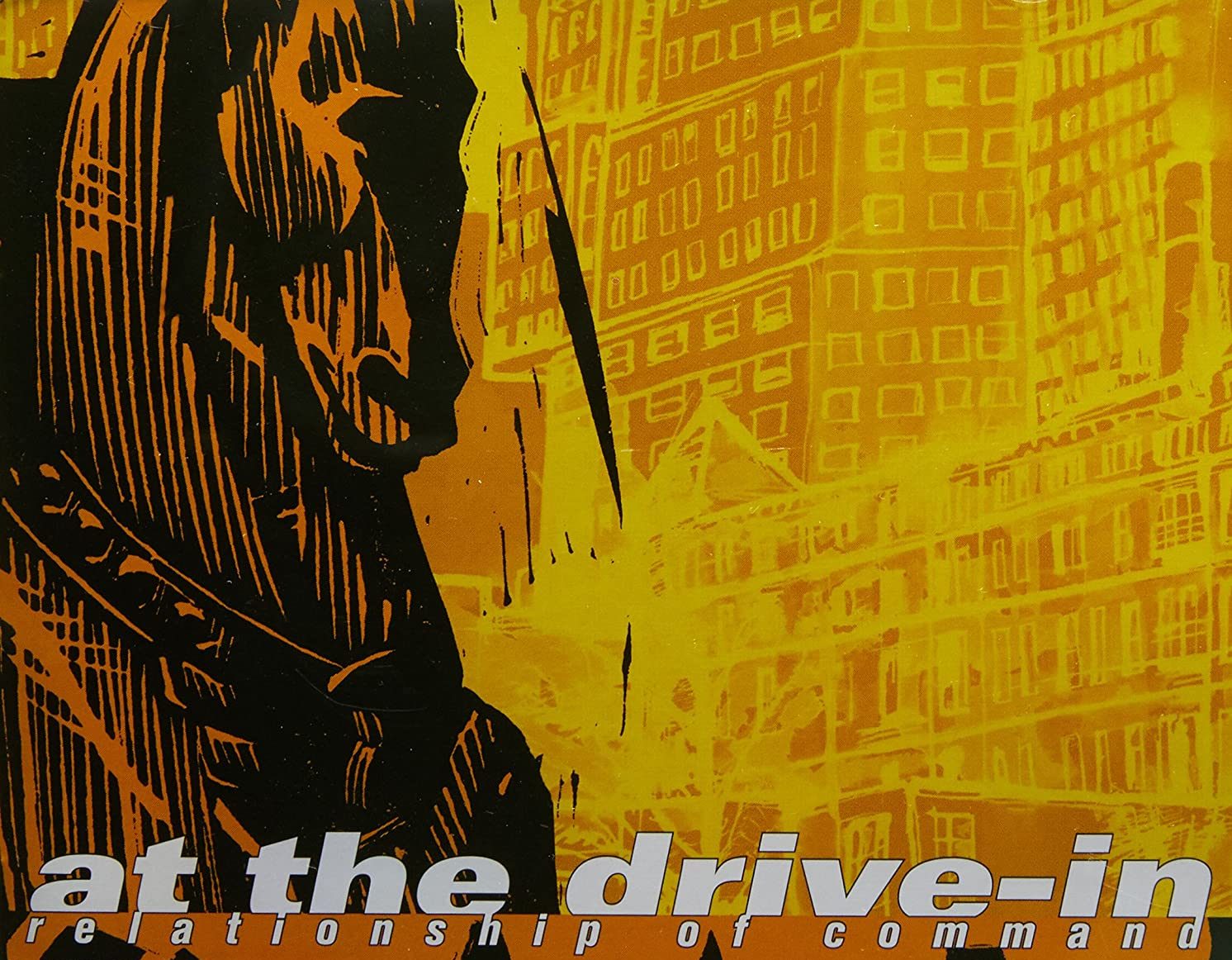 A SCENE IN RETROSPECT: At the Drive-In – “Relationship of Command”

By Dominik BöhmerSeptember 12, 2020 No Comments

Sometimes, the growing pains of musicians we adore are already fleshed-out masterpieces in their own right. Such is the case with Relationship of Command, the third album by El Paso, Texas post-hardcore band At the Drive-In. Spearheaded by Cedric Bixler-Zavala and Omar Rodríguez-López, both of whom would later follow a higher artistic calling by forming The Mars Volta, this album is a completely different experience from what we now know these two mastermind musicians for, but executed in a similarly brilliant fashion, elevating late ’90s/early ’00s punk rock into higher spheres.

On the day of its 20th anniversary, EIN staff writers Asher, Carlos, and Jean Pierre look back at Relationship of Command as a (trans)formative and impactful release, marveling at its prowess and staying power alike. You can read their takes on it below.

At the Drive-In is one of those bands I have always stumbled upon in music forums, YouTube comments, and in daily conversations with peers, but never seemed to get into.  To be frank, my only point of reference towards them was The Mars Volta, and I did (and still do) enjoy listening the hell out of them. So why have I never given At the Drive-In a chance? That will always be a mystery to me, I suppose, but you bet that I am hitting my head against the desk after listening to Relationship of Command. My lord, what a record.

Simply put, Relationship of Command is an anthology of the modern post-hardcore genre. Upon listening to the opener, “Arcarsenal”, you are transported into sounds and attitudes that cemented this music scene we know and hold dear. The chaos, the spontaneity, the theatrics – it is all condensed into this 53-minute aural journey. Not only that, but for a record that is celebrating its two decades of existence, it is insanely fresh and would still hold much ground if it were to be released at the time of this writing.

The unhinged energy emanating from this record is untouchable, even with the mellower cuts such as “Invalid Litter Dept.” and “Non-Zero Responsibility”. The riffs are incessant, the raspy yet soaring wails fend off any kind of mundanity, and the sheer songwriting prowess puts Relationship of Command at an all-time high, mingling with the bizarre but holding enough substance to stand out as a powerhouse of a record.

Think of the melodramatic flares of My Chemical Romance, the volatility of a band like The Fall of Troy, or the grit and rawness from contemporaries such as Thrice, and then listen to this record.  All these familiar sounds are laid out in Relationship of Command like a mighty fine blueprint, and I am sure there is still a lot to unpack here. I invite you to not be an idiot like me and pay attention to the internet for once; you really do not want to miss out a band like At the Drive-In.

The Mars Volta were one of the first bands I ever listened to that felt more like an arrival than a discovery. Like most kids discovering music outside their parents’ tastes for the first time, most of what I listened to was a mishmash of what other kids at school liked, what cooler older relatives recommended, and the odd song I saw on Video Hits or Rage. The first time I listened to De-Loused In The Comatorium, I was shell-shocked. The vocals were piercing and oddly shrill, the music was frenetic, and even tonally it was unlike anything I’d ever heard. I’m not even sure if I liked it at first, but with each listen I’d understand a little more, anticipate a tempo change, acclimatise to Cedric Bixler-Zavala’s soaring vocals, and crave the dynamic chaos of the Latin-influenced percussion. To this day they are my favourite band, leading me – naturally – to At the Drive-In.

My experience with At the Drive-In was the reverse of most people’s. I mean, I was four years old when Relationship of Command was released; I can only imagine what it would have been like knowing the band as this left-of-centre punk only to see the singer and guitarist split away and create some of the most genre-defying and experimental progressive rock out there. Finding out about Cedric and Omar Rodríguez-López’ former band read more like a superhero origin story to me. I could see all the elements of The Mars Volta subtly shine through, as Cedric and Omar seemingly came to grips with their superpowers – Cedric with his phenomenal range, unique timbre, and flair for the dramatic, Omar with his complete defiance of anything resembling normal use of an electric guitar, and his knack for making the most dissonant notes circle round to a sensible melody.

Relationship of Command is a masterpiece of chaotic aggression, with elements of something more magical than standard punk rock clearly coming through. Take the album opener ‘Arcasernal’: What begins with a typically so-wrong-it’s-right Omar riff rapidly descends into what I can only describe as a punk rock face-punch. It’s so chaotic, but everything’s so tight and crisp, Omar’s wandering, overdriven accompaniment to Cedric’s screams somehow fitting their jigsaw flush. You can hear it again in the chorus of the next track, ‘Pattern Against User’, where Omar’s lead work embodies the spirit of punk, inimitably discarding traditional technique.

I’m devastated I never got to see this band in their prime, because their music so clearly belongs to that medium. That’s not to say they haven’t done a great job with the production; it’s loud and brash and feels untouched enough to retain the raw qualities of a live performance. It’s just that At the Drive-In (and The Mars Volta for that matter) manage to make it feel like every member is thrashing their instrument for everything its worth, the same way a jazz band might momentarily break down into cacophony without sacrificing any of the underlying song’s clarity. All the members of At the Drive-In deserve credit for a divergent and masterful album, and they’ve created an apt bookend to an era of great punk music. Every superhero needs their origin story, though, and for Omar and Cedric, theirs was innovation in a different genre entirely.

It leaves me awestruck just thinking about how Relationship of Command came out twenty years ago. Here we are, currently in unprecedented times where everything hurts, but putting on this At the Drive-In classic – no, this absolute classic in general – takes us back to much simpler times. Let’s take a trip down memory lane, shall we?

The opening riff to “One Armed Scissor” takes me back to the mid ’00s, hanging out with my much older neighbors while they tirelessly tried to teach me how to skateboard. In all honestly, it took me two summers just to learn how to ollie, but the memories I made with my neighbors along the way were priceless. Regardless of being a poor excuse for a skateboarder, I spent most of my summers happily watching them shred while we all jammed to their CDs, Relationship of Command being one of them. Hearing this timeless record many, many years later takes me back through those vivid memories. What I would give to be there with my neighbors just one more time, whom I haven’t spoken to in many years. Nostalgia is bittersweet, wouldn’t you say?

Given the environment in which I first experienced this record was in a passive state and on a cheap CD-player/stereo set-up, it at least exposed me even more to the wonders of this style of music. I didn’t get to properly sit down and digest this record on my own until several years later, around 2010, when I stumbled upon it myself, along with the records from The Mars Volta and Coheed and Cambria that were so pivotal in shaping my passion for music. Listening to Relationship of Command today stills blows me away because of the fact that is has not aged one bit. This record is like Jackie Chan. If the same record was released today, I guarantee you that it would still be turning heads like it did back when it first released twenty years ago.

I cannot emphasize how far ahead of its time this masterpiece is. I am always blown away with how well-produced this album is. Not only does it sound better than many similar records being released today, but the multitude of music ideas combined with the raw energy and the subtle Latin influence has yet to be matched in my eyes. Relationship of Command is chock-full of stellar tracks with a huge amount of variety that never makes for a dull moment. From the high-octane crowd-pleaser “One Armed Scissor” to the heavily satisfying slow-burner “Invalid Litter Dept.” (which is my personal favorite) and everything in between, you’re in for a wild ride, regardless if it is your first or your 1000th playthrough. Twenty years later, and Relationship of Command still sounds absolutely electrifying.

There are many records out there across all genres of music that will stand the test of time, and At the Drive-In’s Relationship of Command is one such record. It was one of the pivotal records that set the foundation for the post-hardcore subgenre. Unfortunately, most of what’s being released today within the genre pales in comparison to ATDI’s magnum opus. It’s not fair in a sense, as Relationship of Command set the highest of high bars when it comes to making a well-rounded and absolute mental record. I guess twenty more years from now, we’re all still going to be jamming this bad boy like it was released just yesterday.

What are your thoughts on/experiences with Relationship of Command? Are you a fan of At the Drive-In, and if so, what’s your favorite album of theirs? Do you have any records you’d like to recommend for inclusion in A Scene In Retrospect? Leave it all in the comments if you feel like sharing!