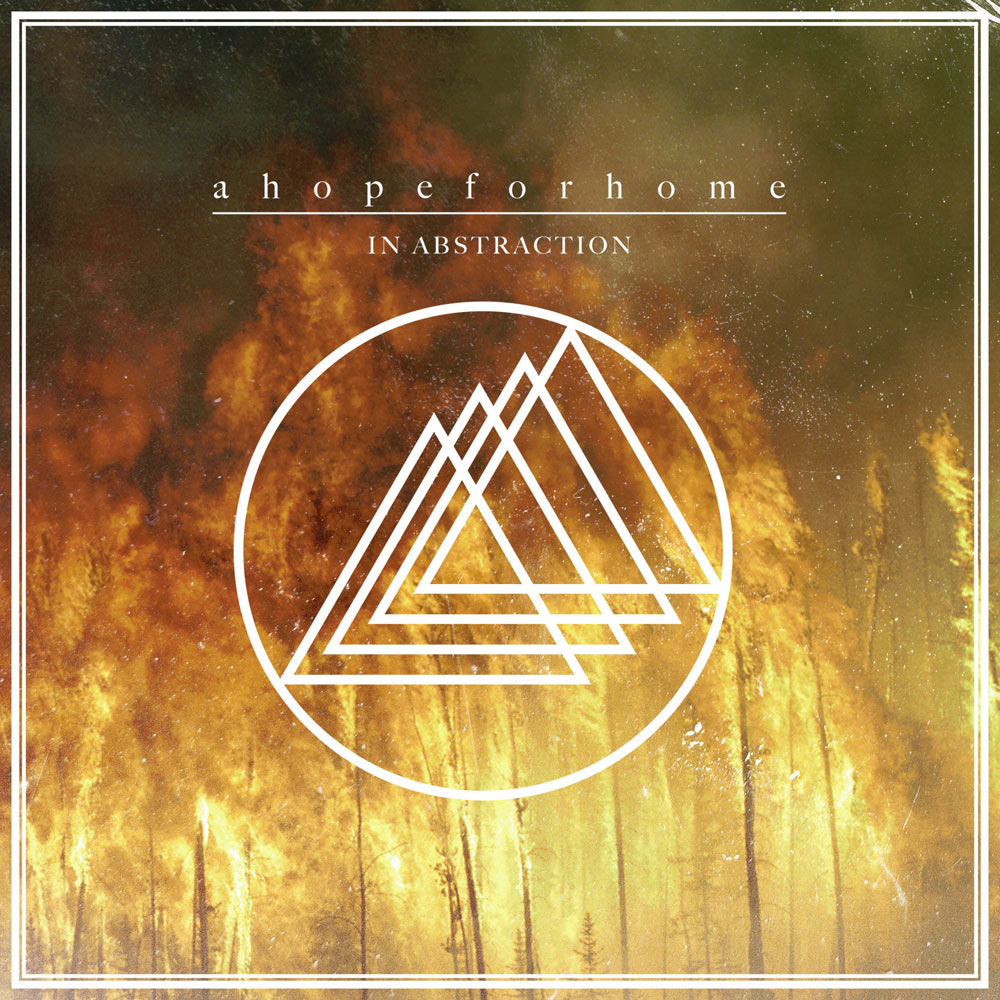 A SCENE IN RETROSPECT: A Hope For Home – “In Abstraction”

By David RodriguezDecember 5, 2020 No Comments

Y’all ever find a band that put out a stellar album and not a whole lot else, and to top it all off, have been inactive for years ever since dropping said stellar album? It’s happened to most of us that dig through the infinite supply of music out there, and today’s A Scene In Retrospect feature focuses on one such experience.

Coming from Portland, Oregon, A Hope For Home deal in sludgy post-metal that seems to encapsulate the diverse tones and moods found throughout the watery deluge that is Pacific Northwest. Though not a terribly prolific band, their 2011 album In Abstraction left quite an impression on our writer Rodney. Let’s see what he has to say on the matter in another impassioned solo ASIR…

First off, I think A Hope For Home isn’t a very well-known band, which is sad in my honest opinion. Right after releasing their album In Abstraction, the band went on hiatus, and this somehow made them a little gem or secret tip one needs to discover. Unfortunately, this time on ASIR I’m taking the piece alone, as I think no one in our team actually ever listened to this album before. So I’ll try to give you all the opportunity to delve into this great piece of music. As for me, personally, In Abstraction is one of the best post-metal records of all time. There’s so much I absolutely adore about this record, and I want to share it with you.

“Calm” starts the album and directly smashes with its sludgy and slow-tempo guitars. One directly might feel depressed, as this opening is truly a heavy hitter and full of melancholy. Following though, the band brings in an aspect that amazes me over and over again: their clean parts. Overall, In Abstraction is full of great clean sections that show A Hope For Home from their heartfelt side. The incredibly warm and well-played clean guitars feel embracing and the slightly fuzzy bass play intertwines into huge melodies. It’s not that the music is wild, it’s rather minimalistic and profits through its simplicity. Little details add to parts and build up over time.

A Hope For Home really know how to play on inner dynamics within their songs. On top, they know how to dramatically write their tracks and create an incredibly exciting sound, which often culminates in lovely passages such as the clean singing section in “Calm”. Afterwards, an instrumental section does the same due to the repetitive riffing and drumming. A guitar melody adds, and while one can simply drown in the ongoing repetition, the band creates a timeless feeling. Similar to minimalist music, this music also creates a mesmerizing feeling, while the drumming gets wilder at times to end in a very heavy section full of energy, squeaking guitars, and the great post-metal sound created on this song.

A song title like “Out Of Ruin, Misery” already shows a lyrical depth which I really like. Musically, this one is a little bit different from the opening one. The pacing is slightly higher, while it generally sounds more like a post-rock song with screamo vocals on top. Imagine Tides Of Man taking a shouter on their music, and it’s basically what A Hope For Home created on this track. The vocals, though they indeed are quite one-dimensional, add an enormous amount of emotion and energy, which I didn’t experience in such a way until I found this record. Something I also love about this record’s sound is how huge and natural the drums sound. Powerful, somehow raw, but always on point, they create a very organic vibe which doesn’t feel overly compressed at any time. This also benefits the little details and accents on this track.

On a dynamic level, “Out Of Ruin, Misery” creates even more tension, as it’s an interplay between atmospheric post-rock parts, crescendoing clean guitar chords and explosive post-metal riffs, backed with subtle tremolo pickings. The clean section at 5:30 is probably one of the very best song tweaks I’ve ever heard in post-metal, as it’s not only incredibly charming, but emotionally touching. Prepare for goosebumps, and listen to this angelic bassline. The soft way of almost whispering the vocals make A Hope For Home sound so fragile, so pained, that it’s quite shocking when the heavy sludge section comes in right afterwards to bring us back to reality and basically rip our hearts out. This ending section has strong The Ocean vibes and gets even slower, just to end in a soundscape design that offers strong Amia Venera Landscape vibes.

“Firewind” picks up on a mood that to me feels hopeful. It takes a little time until its ambiance is fully built up, but when it does, the track picks up the post-rock vibes from before. Led by mostly clean vocals, “Firewind” is once again a little different from the first two tracks. It’s all about the atmosphere and the oh so well sung vocals on this track. There are the smoothest of passages found in between different parts which offer slight bluesy and even jazzy feelings, culminating in an ambient finale with powerful drums and ethereal guitar sounds. The harmonics stay the same throughout this song.

Prepare for a full dose of melancholy when listening to “Tides”. The song starts with an incredibly sad mood, and might change the hopefulness of “Firewind” immediately. Similar to most of the songs on this record, it also grows within its dynamic over time and gets literally louder. It almost seems that the “Tides” are changing. As soon as the distorted guitars come in, the band creates feelings that sound similar to Belgium’s Amenra, especially when the harsh vocals come in, too.

What was given as hints on blues and jazz music is to be followed on “The House Where You Were Born”. The harmonics, as well as the drumming, create a smooth feeling together with an electric piano, really standing out within the sonics of In Abstraction. This song underlines something that now gets visible throughout the whole record: the band’s way to actually intertwine experimental rock music into their doomy post-metal parts. It doesn’t feel right to compare a song like “The House Where You Were Born” to a band like Solstafir or Cult Of Luna, but this might be a good fit in seeing how bluesy and rock-influenced A Hope For Home are on this specific track. “Weaved” follows the softer and heart-warming middle of In Abstraction and once again stands out with an incredible atmosphere and good vocal lines. The drums are more dominant within these parts and create a washy vibe, which literally feels “Weaved” with atmosphere created by the other instruments.

The album finds its ending with a philosophically sounding title. “Everything That Rises Must Converge” also perfectly sums up what A Hope For Home created on the previous songs. The atmospheric sadness, melancholy, hope, and devastation all are to be found within this last song. The commencing ambiance feels like breezes of air brushing through my lungs while they slowly prepare this record to find its peace. Peacefulness indeed is another feeling that now clearly comes to mind while listening to the post-rock spheres of “Everything That Rises Must Converge”. After three minutes of building up, we’re back on the emotional post-metal sound that was already established on the first two songs of this album.

I know that (for many) a record like In Abstraction might seem boring, if you don’t take the time to consume it in full. Indeed, it needs full dedication to the musical material. I highly suggest taking the time to totally focus on the music, as it’s nothing that will give you a short-term portion of fun. In fact, In Abstraction is an emotionally roller coaster ride full of dynamics, tension, sadness, hope, uncertainty, release, and relief.

If you consider yourself a fan of bands like Amia Venera Landscape, Cult Of Luna, Fall Of Minerva, Devil Sold His Soul, The Elijah, Rinoa or Rosetta, you just need to check this album out. It’s exactly what you’ve been searching for, even though you weren’t aware of your search until now! Take this record on a sunny day in autumn, close your eyes, let it take you away, and enjoy the music. Take your chance, because in my honest opinion, this album is criminally underrated!

The band hasn’t been doing much since the release of In Abstraction, which is probably why they are so unknown. But they’ve been teasing new material, and it looks like a follow-up is coming in 2021? If this isn’t news after finding a new favorite band, then I don’t know what news is at all! Come on, just release another record like this and I’m happy.

What are your thoughts on/experiences with In Abstraction? Are you a fan of A Hope For Home, and if so, what’s your favorite album of theirs? Do you have any records you’d like to recommend for inclusion in A Scene In Retrospect? Leave it all in the comments if you feel like sharing!