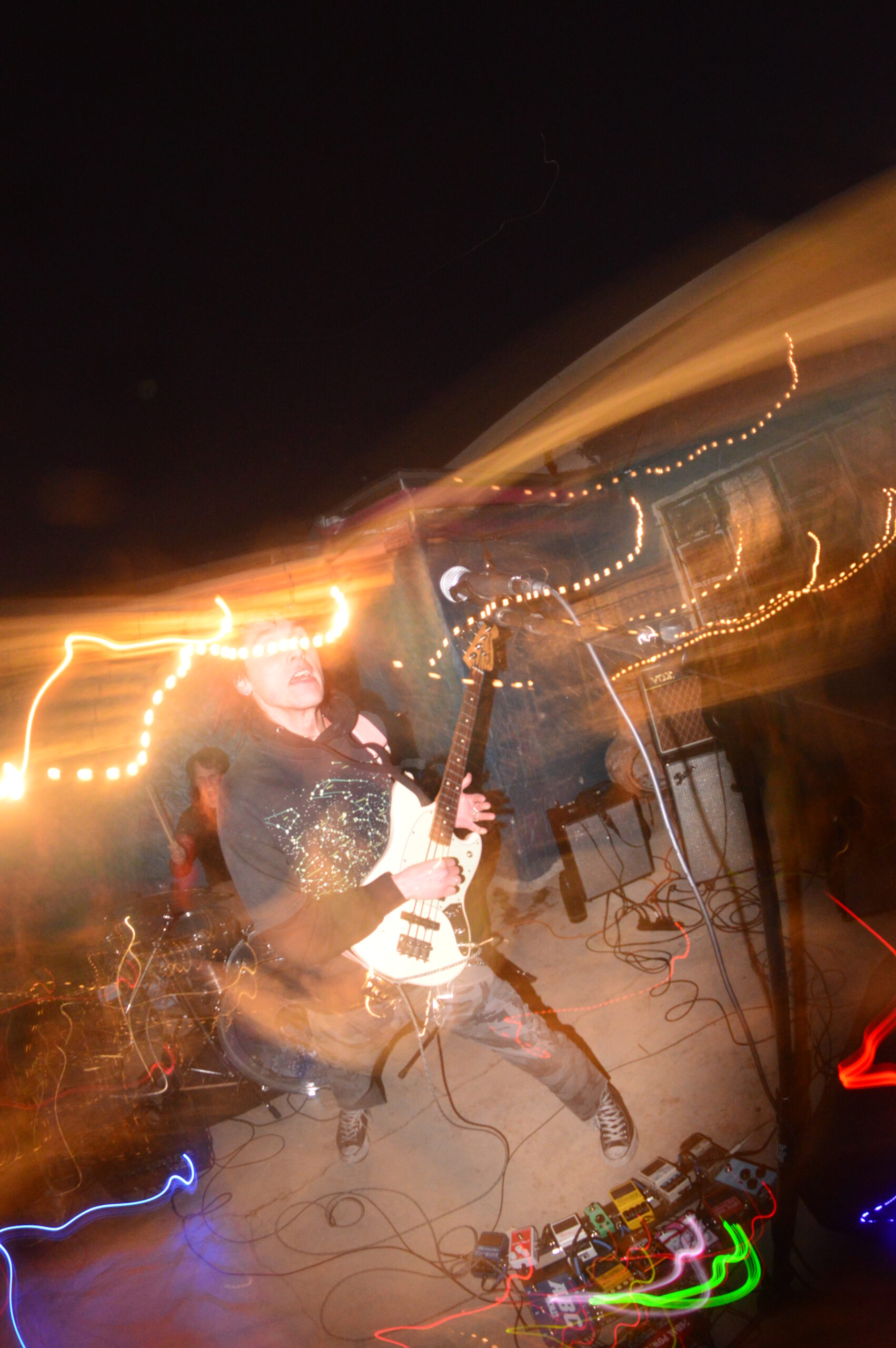 By Carlos Vélez-CancelDecember 12, 2022 No Comments

A direct assault to the senses. A submersion into suffocating waves that welcome you with sounds of metallic scrapes and frantic anger. Unapologetic chaos that moves with a purpose and thus breaches the confines of the mind to cause utter destruction. Come across it and it’s too late. No, this is not a strangely accurate depiction of a car crash, nor some vague teaser for the next psychological horror blockbuster. This is simply Venus Twins.

I caught this drum and bass duo opening for Haru Nemuri at Three Links in Dallas, TX back in March of this year, and something about their performance struck me to this day – hypnotizing as it was ape-shit wild. I figured, then, to make them a Weekly Featured Artist here at Everything Is Noise because, honestly, the sheer energy their music emanate is too infectious to not be shared around.

Self-described as ‘noise rock noise‘, identical twins Matt (bass and vocals) and Jake Derting (drums) formed Venus Twins from a Denton college town scene brimming with jazz, ska, and math-adjacent music. This DIY upbringing explains the raucous yet idiosyncratic energy that would characterize their brand of noise rock on all their releases – look no further than their origin story:

‘The two of us were asked to play a mini fest house show when we were a guitar and drums duo, and we got together the day before and wrote a bunch. We were probably really bad, but we got the name Venus Twins from our friend at that show and started playing more together after that.‘

Denton also hails as the very place where the duo left their first mark on the independent music scene with their first EP Kickass, released in late 2019. Containing ‘the first songs we were writing together… to have fun and experiment in punk‘, Kickass lays the foundation of their sporadic stylings that would come to define Venus Twins‘ later outputs. “Addiction” embodies the spirit of Death From Above 1979 and Dead Kennedys through its mesmerizing riff, catchy hooks, and overall nonchalantness, full with all the distorted and buzzing goodness. “Meat Is Murder” follows suit, albeit with a more organized approach, highlighting the command the duo holds when it comes to songwriting.

The last two tracks, “Doom // Crucify” and “Vile”, however, truly grabbed me by the head and smashed it right onto concrete floor. Distancing themselves from their punk musings and teasing their way towards doom and sludge territory, both songs present a sense of dynamic that heightens the blood-curling rage contained in them. The sasscore-esque vocals on top of absolutely domineering basslines and hard-hitting (but no less nuanced) drumming makes for a musical identity that’s impressively evident, especially for a debut offering.

With the same rabid adrenaline presented on that EP, Venus Twins sought to make the move and head over to the equally-intense state of New York, unleashing their second one, Eat Your Dogs, in the span of a little less than a year. Since then, the twins have found footing in both New York and Texas – a decision that would impact their sound.

‘We seem to write in different styles in each city.  Kickass & RAXIS were written in TX, while Eat Your Dogs and the new stuff we’re working on is while living in NY, and feels more experimental. Both places have shaped us to put in constant time and effort into our music, but NY pushes us harder and more creatively.’

And that absolutely checks out, because Eat Your Dogs is unhinged. With a fuller and more textured sonic palette, the duo’s second EP shows us a set of pure, unfiltered noise rock tracks whose disorienting musings is on par with the same intensity as the cacophonies found in an industrial park. Much more shocking might be its title, however, which caters to the EP’s overall message ‘related to speciesism and being vegans‘, and borrows from the music video of the third track “The Whole Thing Is Sick” (it’s… quite something).

Enter RAXIS – Venus Twins‘ debut full-length record and product of a head-on collision between Kickass and Eat Your Dogs. Released this year, RAXIS is a proposal of their shapeshifting approach to noise rock, characterized by a more collaborative, focused, and polished sound, but nonetheless exploratory and ruthless in essence.

‘The bulk of RAXIS was written during COVID, and we had an enlightenment period of working day in and day out on this record. We were reading books again, we started writing lyrics together, and we were honing in these songs every day for months, exploring different ideas and scrapping quite often. Recording was done with Michael Briggs at Civil Audio in Denton, and it was a great experience. I think we had 6 total days between tracking and going back for overdubs and vocals. Michael was super helpful with defining a sound and always had awesome ideas.’

It numbs you, this album. And I say that in the best way possible: there’s a sense of adventure to these tracks that is strangely alluring, while simultaneously feeling like a full-speed descent into hell. Honing their experimentation craft, RAXIS displays a varying set of moods and atmospheres that, although similar, are easily distinguishable and have their own place within the record. Strokes of no wave, industrial, and drone can be heard throughout, supported an onslaught of huge, metal-tinged riffage that make the overall album feel even more muscular and impending. This will surely be one of the most intriguing listens you’ll stumble upon in 2022, mark my words.

Identical twins foraying into the noise rock genre and fucking killing it; what’s not to like? The level of intent and just plain relentlessness Venus Twins inject into their soundscapes is really promising, and I am but stoked to see how they will evolve from RAXIS… which is something that we might find out soon! The duo is currently working on a new five-song EP and, additionally, have scheduled some more tour dates in Texas for the remainder of this month, along with a scheduled SXSW appearance in March 2023. Needless to say, do give a follow to their socials linked below to be updated with all the goodies. And now, as accustomed, some last few words from our Weekly Featured Artist:

‘Whats up! Listen to RAXIS now!!!! And hit us with a follow on IG at venus_twins THANKS‘