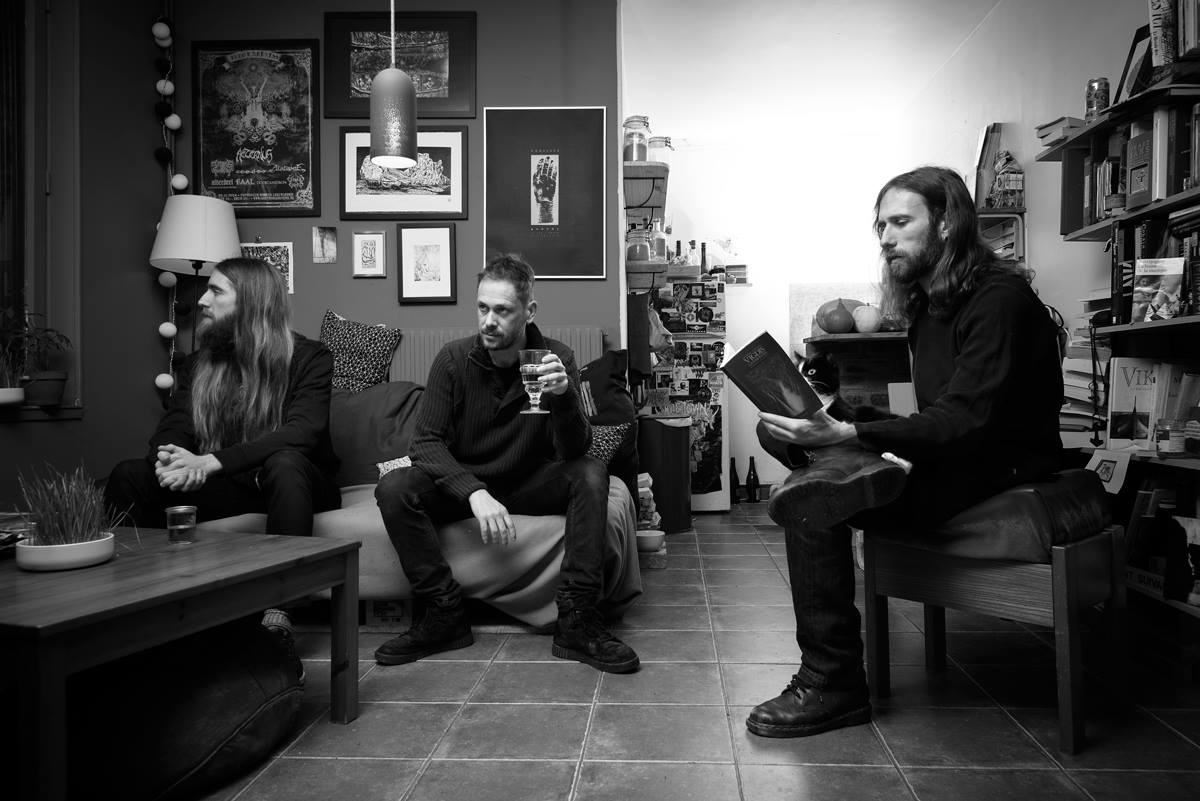 All over the globe and from nation to nation, there are trends that emerge or scenes that develop that seem to appear fully formed. The French back metal scene is one such group that fits well into this phenomenon. Today I am proud and excited to bring you one of the finest purveyors of black metal in all of France, Sordide. When I first heard their latest effort, Hier Déjà Mort I knew that I had to get them featured on our site. The album is a raw, technical, and magical experience that is indicative of what makes black metal great but also has intangibles that make it unique and utterly memorable.

Black metal is a genre that above all else seems very intentional to me. Not only does it take a certain skill set to create the music itself, from the instrumentation to the wry, retching vocals, but also falling into this category means that you’ll no doubt be a bit on the fringe. When I reached out to Sordide to ask them about how they formed and why they make this music their response matched what I anticipated:

‘It’s difficult to analyze oneself on this subject… Obviously the many different kinds of music we listen to, we share, we make each other discover… But surely also the need to externalize anger and frustration, music being a cathartic way to manage our inner violence.’

The need to constructively and artistically vocalize one’s frustrations is what makes a lot of the aggressive music that we love, and Sordide do this quite well. To distill your violence into song is not only hard work, but the right environment and supporting cast are also necessary to make this work. As with any band, there have been some changes to their lineup and the shakeup seemed to be a blessing in disguise more than a tragedy in the end:

‘At the very beginning, Sordide was a quartet: singer, guitarist, bassist, drummer. The singer left the band during the recording sessions of the first album La France A Peur, hence the decision to continue as a trio with every member singing. Due to personal and musical divergences, Sordide dismissed the bassist just before the first tour. Since then and the arrival of Nebehn, it seems that we found the perfect line up. What brought us together as a band is a strong common will to create and perform music we try to make as good and as personal as possible.’

One notable takeaway from these changes is that one singer became replaced with three. This dynamic positions Sordide as somewhat unique when it comes to their vocals. In a way, it unifies their angst and strengthens the intensity of the message when all three band members are in unison both vocally and instrumentally. Hier Déjà Mort is a perfect way to explore this, as they have perfected their methods for conveying this energy into an album. I was smacked with how energetic and powerful the music felt when I spun the record for the first time. When I asked the band on how they managed to capture this feeling, they had this to say:

‘The writing process of this album was quite fast (about 4 months), and during that period we did a lot of rehearsals. So we entered the studio very sharp musically but with very fresh material. As with the two previous albums, all the instrumental tracks were recorded live, the three of us in the same room. Everything was recorded within two days. We then wrote the lyrics and recorded the vocals by ourselves, at home. This is may be a bit stressful but it’s an efficient process to capture on a record the spontaneous and sincere feeling we try to create while playing gigs.’

While it may never happen that I’ll get to see Sordide live, I get the feeling that what I have heard on their albums isn’t far off. The live instrumentation that’s captured feels like lightning and has an immediacy that isn’t found on many records in this space. Hier Déjà Mort clocks in at just under 40 minutes and that is the perfect amount of time to spend with such a harrowing album. The energy is intense throughout, but that doesn’t mean that it lacks a thick atmosphere as well. Its rawness is captivating in a way that few black metal records have in recent memory.

After the release of Hier Déjà Mort in February, the band took to touring in support of the album and got to play some incredible shows. When I asked the band what was next, they indicated that there’s more touring to do:

‘We are back from a France/Switzerland/Italy tour with the Dutch band Turia, and just had the pleasure to play before Sunn O))) in our hometown. Quite good ways to present Hier Déjà Mort as we played the full album at each of these shows. We have a few gigs coming in France and Germany, a mini-tour with Turia again at the end of spring, another tour in October with Ataraxie (Belgium, Netherlands & Germany…). And maybe this time we will start working on the next album quite soon and not a few months before entering the studio, haha.’

Be sure to follow Sordide on Facebook for all of their goings-on, tours, and music! You can also purchase their latest effort Hier Déjà Mort and the rest of their catalog on Bandcamp.