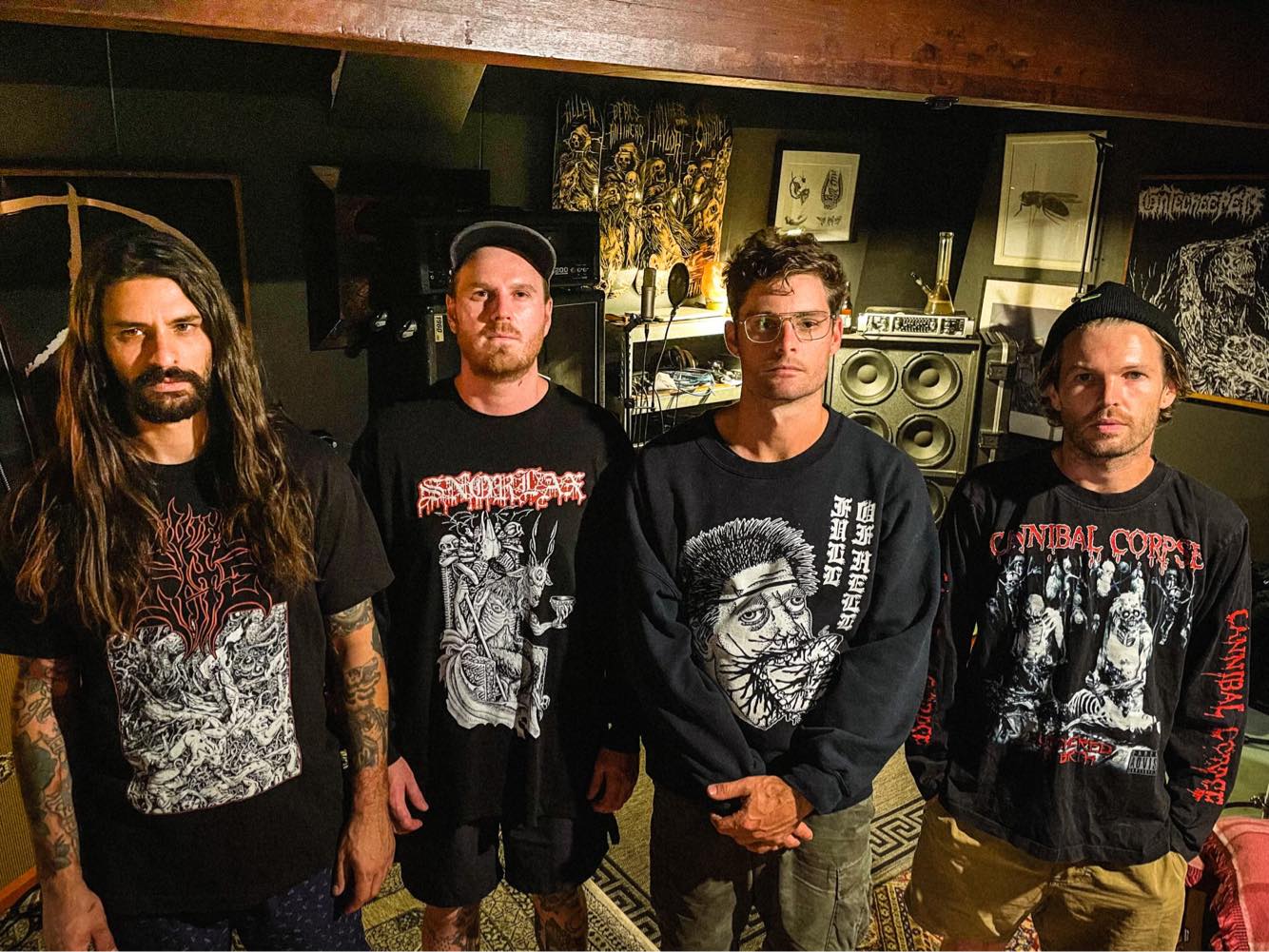 For many New Zealand-based bands, including my own, travelling to Australia to play gigs is pretty much considered ‘making it’. Not that anyone’s going anywhere in a hurry; plus, it’s pretty hard to know who to play with in a country you don’t know anyway. Occasionally, though, I stumble upon an Australian group that would make the trip worth it. One of those bands, for me, is the Brisbane-based death metal four-piece Resin Tomb. I reviewed their debut self-titled EP earlier last year, and I just loved it. It was the middle of winter, we’d recently come out of lockdown and gone back to more or less everyday life, which meant walking through a practically empty park every day to get to and from work. Resin Tomb was the perfect length so that I could squeeze in a listen on the way there, and another on the way back, and I loved those walks.

There’s a raw, feral energy about Resin Tomb. Right off the bat, I just loved Resin Tomb’s attitude. From the opening track “Abrogate” right through to the monolithic closer “Bestial”, it reeks of a desire – whether the desire is to live or to die is open to interpretation. There’s so much pain to it, a longing, desperate quality, and it fascinated me, so the decision to feature this band was an easy one. On top of all of this, Resin Tomb was (and remains) simply one of the heaviest things I have ever heard.

I’ve always felt that Resin Tomb had created an EP that had been a long time coming, a culmination of ideas that seem to have festered beneath the surface for years. In a way, that instinct wasn’t wrong: the members of Resin Tomb have been playing in bands together since 2014, and through this, became close friends. Vocalist Matthew Budge explains: ‘When things got quiet with our other bands, we would talk about creating something new, and when we finally had time, we had a jam together and things just fell into place‘. Originally a three-piece consisting of Budge, guitarist Brendan Auld, and drummer Perry Vedelago, the trio soon realised their music needed bass, and their good friend Mitch Long ‘was keen immediately’. It seemed Resin Tomb had hit the jackpot: ‘We’re friends first and the creativity flows when we are together‘.

Much like how the line-up just fell into place, the freshly-formed Resin Tomb didn’t have any issues settling on a name either. Self-confessed ‘avid participants in recreational cannabis’, Budge elaborates: ‘Years ago I think I may have referred to the stem in the studio bong as a Resin Tomb due to how clogged it was, then we just laughed and agreed ‘that would be a good band name’’. The name found its home as soon as the band started. To be honest, the name was part of the reason why I reviewed Resin Tomb’s debut in the first place – to me, it’s very evocative, dreary but brutal, just like the music itself.

Resin Tomb’s sound is a fusion of several metal subgenres. Discussing the band’s influences, Budge says that ‘there’s absolutely no way I could sit here and list the artists that influence us because it would be a very long list. I think when it comes to writing the music we make, you’re going to be mostly influenced by other bands within your respected sub-genres‘. With his own love for grind, Auld’s taste for death metal, and Vedelago’s soft spot for sludge, Budge explains: ‘We take elements from bands we like within these genres and let it influence our sound’. Resin Tomb’s sound being at the centre of the Venn diagram of these genres is completely unsurprising: the weight of sludge, technicality of death metal, and aggression of grind fuse into a singular knot of heaviness. It could never ‘just’ have been death metal with all of those other influences in there.

So how do the songs actually come to be? Like many other bands, Resin Tomb generally start with a riff or a drum groove. Normally, ‘someone will pitch something, then play it on repeat while the other person figures out something to suit’. Bassist Long ‘has a great ear for placement and will often suggest switching certain parts around’, after which it soon becomes clear whether the section is going to flow and build, or get put ‘back in the vault for later’. Once the band is happy with the section, they make a quick room recording, something they are able to do thanks to their jam space being the guitarist’s studio. Budge adds that this is very helpful, ‘as we often smoke too much and forget the riffs not long after they’ve been written’.

A writing highlight for Budge was “Prostrated”, at just under a minute and a half the shortest song on the EP, and also one of my favourites. Budge explains: ‘That was the first song we wrote together, and was the point we realised what direction we wanted to take the sound’, further stating that ‘things just came together seamlessly and we had the structure done after the first jam‘. The song does have a very fresh, natural feeling to its incessant dissonance – it feels very organic and is delightfully concise. On the other hand, Budge says that the much grimmer “Penance” got ‘tweaked and tweaked for weeks, sections got changed in length then completely deleted’. He adds that ‘some songs are harder to bring together, but I feel the process of how we work through them is often the same’.

The lyrics are always the last part to be written. Budge explains that he usually creates vocal patterns as they rehearse, and then tailors the lyrics to fit that phrasing. Once the theme of the song is clear, he tries to ‘get into the headspace of the protagonist, then decide which emotional state they are in and talk from their perspective’. Resin Tomb is strongly cohesive and manages to suck me into its narrative extremely deeply in its 17 minutes. I never really understood its story completely – in my review of it, I said that ‘the only thing that’s clear is that this is an honest, painstakingly curated expression of misery and pain’. It turns out I wasn’t far off. As Budge explains the concept behind the EP:

‘Each song conveys realisations, all of which shape the character’s internal beliefs and stages of acceptance. Each song is a state of despair, ranging from naivety and depression, to anger and resentment. The character starts defeated but uses these emotions as a driving force to overcome their oppressors…we kept it as vague as possible so people can interpret it the way they see fit.’

Not only does having a studio as a jam space make practising and recording demos a breeze, it also means that the recording process for Resin Tomb was ‘a great experience’. The band got to record in a familiar environment and found they were ‘rarely pressed for time’. They’re also currently sitting on a new two-track release, which Budge says will be out ‘at some point this year, hopefully sooner rather than later’. He also mentions they have some ‘interesting ideas for the physical release’, which definitely has me intrigued! But the mystery two-track is not the only exciting thing on the horizon for Resin Tomb: they will also be playing their first live show in 2021.

It’s been a rough time to be starting out as a live band, that’s for sure. Brisbane’s ‘local favourite venue’ Crowbar shut its doors at the beginning of 2020, and of course COVID ‘slowed things down dramatically’, but Budge feels that ‘the forced break has made people keener than ever to come to shows’. At the time of our interview in late March, Resin Tomb were gearing up for their first-ever show with Deliquesce from Melbourne as well as Brisbane locals Shackles and Disentomb, a show that’s unfortunately had to be postponed until June.

In an ideal world, Budge thinks ‘it would be incredible to play with Wake, Artificial Brain or Ulcerate’, and that if they could play with Cannibal Corpse ‘that would have to be close to peaking at life’ – for now though, just getting to play with the ‘ridiculous line-up’ of Deliquesce, Shackles, and Disentomb would be pretty cool. Budge adds that ‘if things get better travel-wise we’d love to make it overseas, I think New Zealand could be possible within 2021, if not early 2022’. For now, Resin Tomb ‘will keep playing as many Australian shows as our work schedules allow, and keep pushing forward’.

To hear more of Resin Tomb‘s ungodly heaviness, check out their Bandcamp and get yourself a sick sativa-green cassette. They also have Facebook and Instagram accounts for you to keep up with their shenanigans – get it in ya!