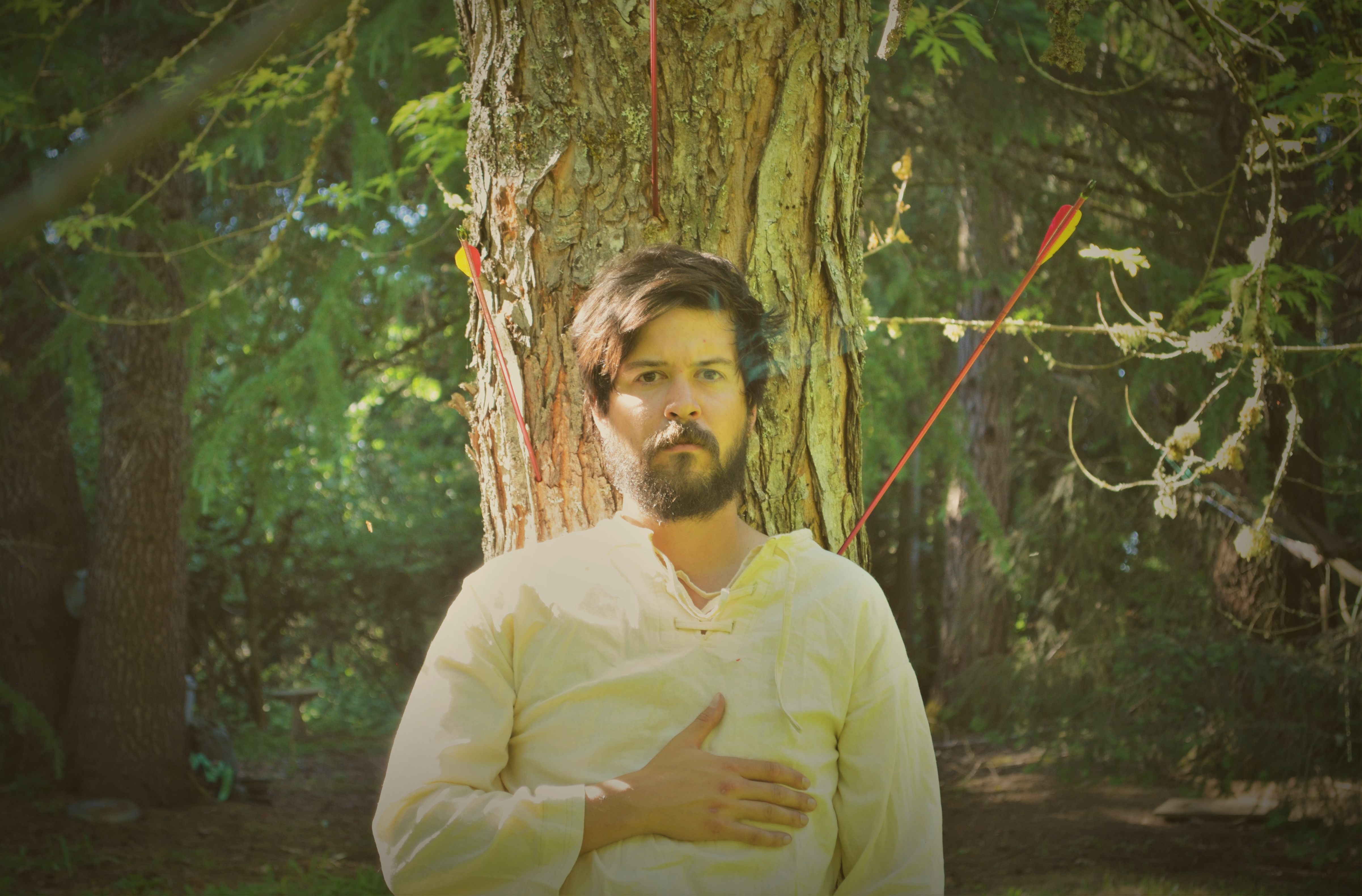 By Dominik BöhmerNovember 10, 2022 No Comments

The Sea Weaver by Wickerbird is a pensive, deeply spiritual folk record that will stay with you long after its final notes have rung out; haunting but mesmerizingly beautiful.

A few words about the cover artwork to Wickerbird’s new album The Sea Weaver before we begin. A bird calmly soars over deep yellow fields; purplish-blue mountains on the horizon, rising towards the azure sky speckled with peach-orange sunset clouds. It’s expansive, majestic, yet not without a wistful tinge of nostalgia. Leaving home, not knowing if or when you might return; yearning for a home you never had in the first place – these are the feelings this piece evokes, at least from my point of view. Detached, wandering, unsure, but with a sense of wonder at the marvels of one’s surroundings.

And, voluntarily or no, that’s exactly the sort of vibe The Sea Weaver, well… weaves for whatever weary listener finds their way into its expanses. Longing, but without an ounce of despair; transitory, but never discouraged. There’s also a deep-rooted sense of connection to it all, as though this small piece of art miraculously ties into the unfathomably large universe we all share. This album is very emotionally charged is what I’m getting at.

Wickerbird is the project of one Blake Cowan, who, over the course of three studio albums (beginning with 2012’s The Crow Mother) developed an immersive, atmospheric approach to folk music that is now coming to fruition on The Sea Weaver. His finger-picked guitar is met with choirs, synths, and other embellishments that set the stage for a record that symbolizes him finally reaching outwards after exploring the liminal spaces of his interior world through his previous work. The Sea Weaver is a record of change, haunting fate, and a struggle against the unraveling of humanity that inevitably impacts our environment; beautifully realized but deeply unsettling in its essence.

Opening proceedings with “mottled light”, an almost-instrumental – almost, because it features non-lyrical vocalizations from Cowan – we are introduced to parts of the palette the artist will be drawing from for the 13 songs to come. Plaintive vocals and background ambiance made from synths and field recordings accompany Cowan’s crystalline guitar, and it all bleeds into the following track, “in altar wine”. Here, things become more overtly folk-y, although the focus is still on creating an atmosphere. The vocals are warm but feel distant, forlorn, and the harmonies are just stunning. Punctuated by the occasional drum hit and shimmering synths, this song is the first fully fleshed-out look at the sound Cowan created for The Sea Weaver-era Wickerbird.

As inherently personal as Cowan’s lyrics are, one gets a feeling of them being miniatures of old folk tales from the deep country, passed down from generation to generation in a never-ending stream of (self-)affirmation, reclaiming, and search for meaning. Personal, yes, but to a degree that transcends the individual perspective; it’s an insight that arises naturally from the common consciousness of a tight-knit community in fear of and filled with reverence for the nature that cyclically raises and destroys them. Perhaps that’s just me reading (or feeling?) too much into things. Be that as it may, one example I’d like to mention comes from “the lamplighter”, which reads as follows:

It reads like part of an enigmatic folk story, meant to teach the children some sort of moral or wisdom, and it’s not the only piece of lyricism here to evoke that particular notion. At the same time, everything about The Sea Weaver feels spiritual, as though it were dedicated to a sacred place or memory; indeed, when the choirs and instrumentation lock in just right, one gets the impression of listening to a gospel record. Not necessarily in the religious sense either, it simply speaks to a feeling of connectedness to something bigger than us, which I (and many others, I figure) can relate to without ascribing to a set-in-stone belief system. To illustrate this point, go listen to “bell weather” and tell me its choirs and strings don’t make you feel a certain humbling awe.

Zoning in on the overtly religious symbolism for a second, “little weavings” certainly doesn’t dispel a looming sense of Christian imagery, more precisely a distinct disillusionment with its ways and workings in detaching humanity from nature. I’m fairly certain you will glean a similar understanding from the excerpts provided below; it’s fully in keeping with the album’s overarching themes:

With all our pretty bibles
balking at the wilds still growin’;
and if all of this were needless,
all the forest seems to know it

With all our pretty bibles
squalling for revival
if all of this was something,
it soon enough meant nothing
and maybe in awhile,
we will finally come to notice’

“a crossing song” begins with the sound of flowing water and an almost mournful, reverberating acoustic guitar. At first, Cowan’s vocals ring out in solitude, before being joined by the choir that plays a big role in making The Sea Weaver such an engrossing, gorgeous record. It’s a sound I can’t get enough of – intimate folk set against the inherent grandeur of choral music. Later on, the album’s title track delivers what I perceive to be the best chorus out of all Cowan penned for this batch of material; it’s simplistic, but the progression is unbelievably satisfying.

The core aesthetic of Wickerbird doesn’t waver all throughout The Sea Weaver, and neither does it ever have to, because this specific combination of elements (and pardon the trite saying) just hits different. “inkstones” brings the choir to the foreground, while the following “little weavings” outs a little more emphasis on the folk component. The latter is probably one of my favorite songs on the album, mainly thanks to its yet again splendid vocal performance, although the instrumental is absolutely gorgeous as well. I’m just a sucker for a good voice, I suppose. “the hemlock tree” carries The Sea Weaver over the finish line like a small river flowing into the sea, slow but hopeful. Choral arrangements meet Cowan’s pristine, shimmering guitar sound and auxiliary instrumentation for a beautiful finish to a brilliant record.

At 14 songs and 51 minutes of runtime, The Sea Weaver is definitely more of an involved listen than many people’s schedules and/or attention span allows for these days. I would advise you to set aside the proper time for it regardless, because it’s a richly rewarding work of art that needs to be experienced in full at least once or twice to really grasp its immersive musical storytelling. Cowan has led his Wickerbird project to new, astonishing heights by fully embracing his vision and the will to reflect it onto the world at large. I’m genuinely in awe of this album, and I know for a fact that other EIN folks feel the exact same way.