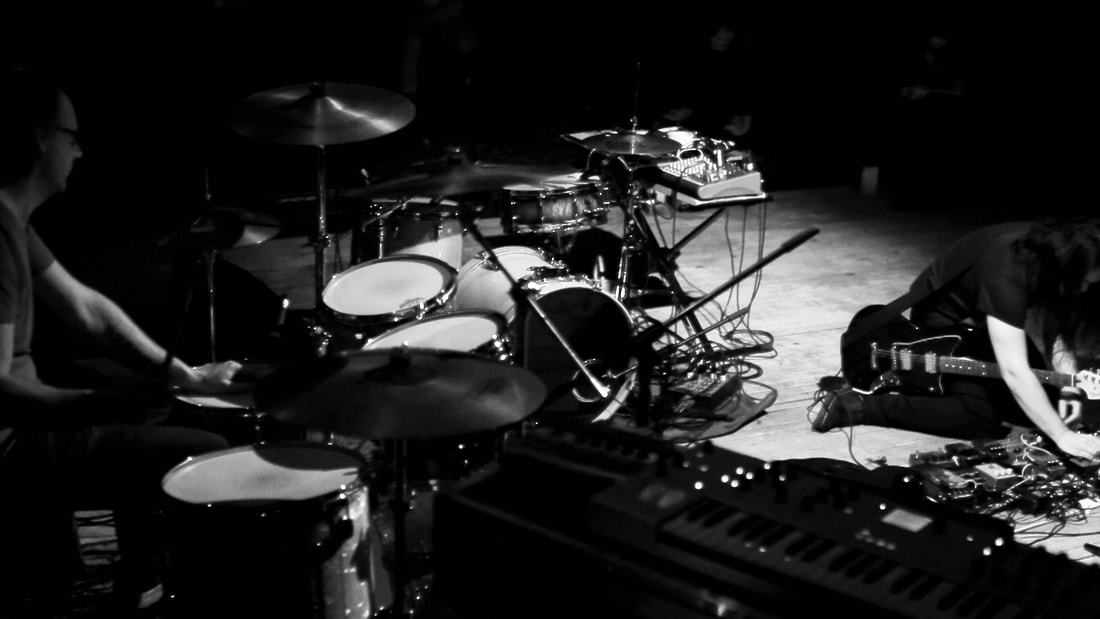 Some Became Hollow Tubes – “Keep it in the Ground”

Some Became Hollow Tubes open the astral floodgates with an improvised stream of spacey drone rock on their debut full-length Keep It In The Ground, gifting us with warm, ochre-toned mirages of better days far gone by now.

In recent years, there’s been a colossal surge of collaboration albums in the metal and rock scenes. Sometimes hitting the nail on the head with a perfect amalgamation of two artists defying genre boundaries, sometimes producing a forced collision with a smoking wreck left behind. Features and guest artists have always been a part of the music scene, but actual collaboration releases have been restricted to better known, bigger names. One reason for the growth of these affairs might be that producing music has become cheaper and easier, and you don’t need to put your audience or earnings on the line as much as you would’ve twenty years ago. Listeners are also expecting more varied and changing output from artists today, so these releases are their own to scratch that certain itch without compromising the artistic integrity or the musical direction of any given artist.

Multiple live improvisation sessions between Eric Quach (Thisquietarmy) and Aidan Girt (Godspeed You! Black Emperor) that took place in Europe and Canada in the past few years, led to the formation of Some Became Hollow Tubes. Being a product of these as well as several recording sessions and demo exchanging, Some Became Hollow Tubes slowly came into existence outside the venues and into physical/digital realm when they released their first ep In 1988 I Thought This Shit Would Never Change earlier this year, and now their first full-length Keep it in the Ground, on June 21st through Gizeh Records.

Characterized as post-drone/hypnotic and psychedelic rock, the album had some high expectations, especially when taking into account the artists’ past endeavors. I was one of those people, getting my hopes up for the liaison of two individuals whose doings I’ve been eagerly following for numerous years. And I’m happy to say they delivered an outstanding album that blends both of their worlds perfectly into itself, creating an entity of variable styles bleeding into one, coherent gestalt.

People familiar with these artists know that neither of them produces busy man’s music. You need to sit back and relax to get a grasp of the bigger picture. The music is strong in its fragility; You should be able to enjoy and absorb the album and not diminish it to background noise at any occasion. We know that Thisquietarmy‘s albums tend to surpass an hour or two, while Godspeed You! Black Emperor has done the same but stayed in the more digestible album lengths lately. It’s a bit surprising that Keep it in the Ground clocks in under 45 minutes when it could have easily been stretched to greater lengths. However, it is pleasing as it is. While it requires all the attention, it’s still durable and your mind won’t wander off at any point, adding to the overall impact and strength to the atmosphere and the release altogether.

“Red Eyes or Bleeding from the Nose or Mouth” ignites the album with ritualistic percussions, slowly unraveling into a steadier rhythmic passage, leading to a remarkable crescendo. It takes a thumping ten wavering minutes to arrive into its destination. This pattern is also occurring throughout the album, but they manage to stay out of getting repetitive or benumbing. A key element in instrumental music is that it inflicts different kinds of mental imagery to keep you entertained and intrigued. It should make your mind wander (not in the aforementioned, ‘what should I have for dinner today‘ -type of way) and you can picture yourself in the ravines of Earth, abandoned and dilapidated houses, on the brims of gigantic oceans as well as in the bottom mires of the said bodies of water.

“Do Not Run Away or Hide Sick People” continues in a more striding and concrete manner. Picking the pace towards the end, the song takes somewhat similar turns as the previous one, but with more varied atmosphere. The whole album flows like water finally free from the stiffening grip of winter, proceeding to cover new, dried out grounds ever so eloquently. This illustration is perhaps the most present in this and the following track, “Another Bad Subplot of a Boy’s Search for his Father”, as well as in all the song changes. There are no pauses between the songs, everything is improvised and compressed together. The tracks are more like movements than individual compositions.

I also adore the notion of having extremely specific, storytelling titles that set the mood and tone of each song in the lack of vocals. The instruments constantly speak without words, and you won’t miss the warmth of human voice at any point, even if you’d prefer the more normal band conformations. Aside from Some Became Hollow Tubes, both artists’ past works also contain these kinds of prominent titles; The track names on Thisquietarmy‘s Métamorphose are one continuous French poem, divided into twelve segments.

Onward to “Dad’s Last Purchase Was from Bed Bath and Beyond”, which despite the tongue-in-cheek title, is an emotional two-minute middle piece which acts as a gateway and a supporting, direct acolyte to the highlight of the album, “Dog Faced Propulsion”. This track is a monumental, strong sample of what these two gentlemen are capable of. They’ll carry you away to beautiful and drowsy, dreamlike sceneries if you let them, and it will be rewarding when you do. The track expands and contracts without edges or abruptness, and I think it is definitely the most protean piece on the album.

The final track, “Construction and Validation of a Conceptual Model of Predicting Individual Activities in Rural Areas” closes the circle. It has a liberating, voluptuous sense of relief throughout, and brings to mind the ending credits of a good film. You won’t be tempted to leave but stick around, seated, waiting for the silence. There will be no post-credits scenes, but you won’t feel let down by the lack of them (looking at you, Marvel). Carried through with a more prompt rate, the album comes to an end with prolonged, fuzzy notes that slowly fade and dissolve into the nothingness from where it all began.

Keep it in the Ground belongs to the first category of the two I mentioned in the very beginning of this review. Some Became Hollow Tubes brings two like-minded musicians to one and creates something fluent and convincing. Have they stumbled upon a completely unexplored and untouched territory? Perhaps not, but that doesn’t abate the good songwriting and emotion this album holds. Ending on a rather positive note, this album could be easily recommended to people not familiar with instrumental post-something music, and that itself is a substantial point to make.