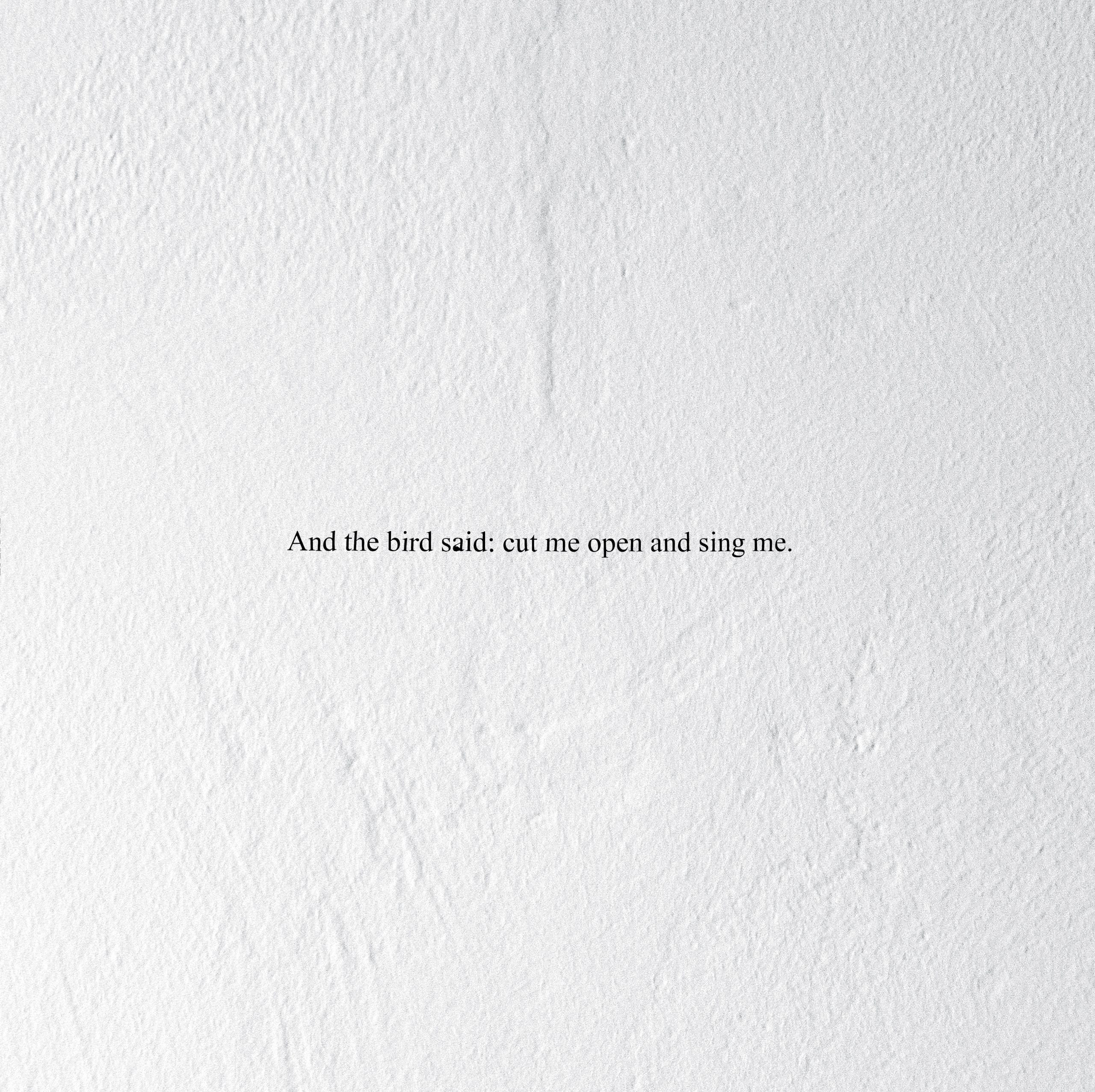 Prairie – “And the Bird Said: Cut Me Open and Sing Me”

You will be more than surprised to find the emotional complexity Prairie‘s new record, And the Bird Said: Cut Me Open and Sing Me, has to offer.

Ambient music can be kind of hard to review as it’s more about a certain vibe and just letting yourself drift rather than going in and analyzing or critically looking at it. Though with today’s record, a little bit of the review was cut out for me due to the interesting experimentation with texture and concepts. What I’m talking about is the new album by ambient IDM artist Prairie, called And the Bird Said: Cut Me Open and Sing Me. Prairie offer an interesting concept, serving us a fresh take on granular synthesis playing with analog and digital emulation, field recordings, and spoken word to create a melting pot of electronic experimentation.

“Boys First Kill” is the title of the first track on the album. It is the second longest track and quite different from what you’d expect from the tags IDM and ambient music. With it being the second longest track you already notice that for an ambient album, the tracks are quite short. The track itself start starts off with an analog synth pulsating in a steady rhythm. The steady pulse almost sounds like a gong or a bell of sorts. It has an imperfect analog feeling to it almost like it was recorded on tape and then re-recorded onto digital file.

Though it is a synthesizer, it seems quite organic; I would even go as far as to say it sounds meditative. Heavily reverberated synth stabs surround the pulse in a languid dance. As dissonant and piercing as they might seem, they aren’t at all displaced or disproportionately uncomfortable in the boundaries of the music. Though I have to say there is a certain sense of looming dread hanging above the song, like a sword of Damocles. Siren-like synths follow the track after the midway point. I deliberately chose the word ‘follows’ as it seems like this siren-like sound stalking the calm and collected pulse. “Boys First Kill” is both a bolder and a more concise opening track than I anticipated from an ambient record.

Next we have the track “Cut Me Open” which seems to stand in stark contrast to the prior song. Beginning with a droning bassline that seems to envelope the listener, this piece is neither calm nor collected. In the background, one can hear items scraping against what I assume is a wooden surface and suddenly a voice starts speaking. Heavily-modified through a delay effect, the words the voice speaks are hard to make out, as they blend into a percussive cloud of words. The track again shifts wildly after the half way point with the percussive high timber synth giving the song an almost perplexed feeling. It is like we as a listener have been hit on our head and a concussion rings in our ears.

Which really interested me about these first two tracks is the stark contrast between them and the oxymoronic nature of their structure and sound design. They are both clearly atmospheric pieces, yet they seek to disorient and give you a warning that what is happening is of the unnatural. What is also interesting is that these two tracks together with the third track, which just consists of cicadas humming, make up the first act of the record. The second act, which we’ll discuss in a second, is quite different from the first which you’ll realize soon enough.

“Alpine Swift” and “(Camargue)” are both heavily reliant on granular synthesis. In granular synthesis, a sample is taken and cut into micro samples no longer than 20-250 milliseconds. In the aforementioned songs, beautiful samples of lush, reverberating strings are taken and crushed into an unrecognizable pulp. This is achieved by speeding them up to a point at which the original sample starts glitching out and introducing digital artifacts. There is nothing left of the lush analog synthesis we have seen before. It has become fully inorganic and is taken to its absolute extreme. You could say in this act something beautiful was taken and bent until it broke to form something new.

The last act encapsulates all the aforementioned stylistic choices. They come together in a horrifyingly beautiful cacophony of textures and sounds. The drone piece “ViewViewer” seemingly closes the story with the following track just serving as an outro consisting of nothing but field recordings. As there is no clear red thread to lead one through this experience I felt a little confused, I would even say left alone with how the last act played out. The droning, vague melodic ideas and increasingly dark timbre makes me feel like the character developed throughout this record slowly fades. What exactly happened to them is unclear.

The most interesting aspect about Prairie’s music is that it’s both fantastical, but also horrifyingly realistic. Immense emotional weight is engraved into these tracks. Rarely have I ever seen such a raw and instinctive experience be invoked this clearly by merely textured sounds and a handful of notes. There is much more here than some measly genre tags could ever describe. This is archaic fear inscribed into a musical experience. For this I give kudos to Prairie.