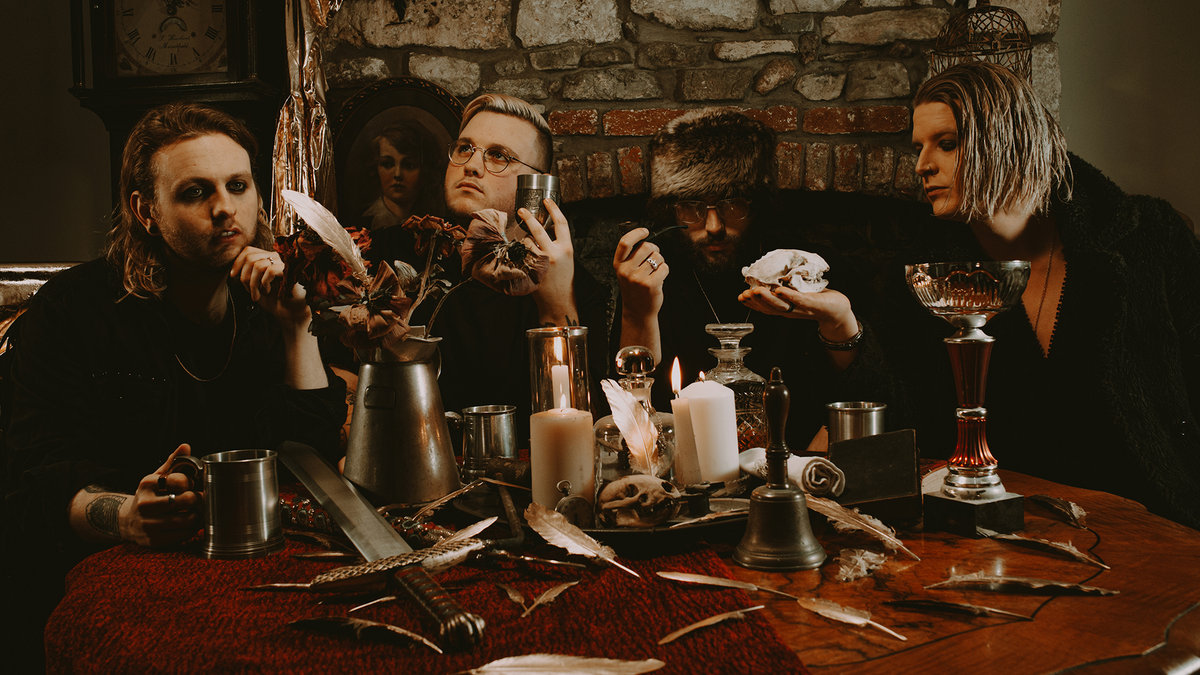 Phoxjaw‘s debut album Royal Swan is a strong statement that solidifies their place in modern alternative metal, and shows much promise for what’s to come.

Over the years, a grunge renaissance has been gradually unfolding, bringing with it a number of acclaimed acts dedicated to the early 90s Seattle sound, often splicing in elements of other genres such as punk and shoegaze. The earliest example in this particular mold that comes to mind is the band Septembre, whose single “I Am Weightless” enjoyed wide exposure as part of the soundtrack to Need for Speed Underground 2. Years later, Superheaven made a splash with two acclaimed albums, with Wolf Alice, Dinosaur Pile-Up, Fangclub, Pretty Vicious, Higher Power, and others soon also enjoying varying degrees of success (most of them hailing from the UK). It’s within this context that Phoxjaw’s latest album Royal Swan can be best appreciated.

Phoxjaw emerged on the scene with their first EP, 2018’s Goodbye Dinosaur… What initially drew me to them was their unique spin on a fairly similar approach to grunge shared by the bands I mentioned above. Phoxjaw showcased more unhinged tendencies; channeling post-hardcore metallic aggression through their catchy melodies, while also evoking a bit of Dillinger Escape Plan’s angular chaos and anxious noodling. Goodbye Dinosaur… was quickly followed by last year’s A Playground for Sad Adults EP, which saw the band borrowing liberally from the sounds of various Mike Patton projects, and veering away from the grunge base of their debut release. While generally acclaimed, I personally found the results less to my liking.

Proving themselves to be prolific artists with an even wider spectrum of sounds to explore, Phoxjaw have made a quick return, this time with their anticipated debut LP Royal Swan: an accomplished, well-crafted rock album with a handful of surprises worth at the very least one spin for fans of the genre.

After a fairly uninteresting instrumental intro clocking in at under a minute (full disclosure, I dislike when bands do this and make a point of highlighting it in my reviews), things kick off powerfully with the excellent “Trophies in the Attic”. In addition to being an intriguing and fleshed-out piece of rock’n’roll goodness, it’s also a showcase of the sounds Phoxjaw have decided to take further and those they’ve left behind. There’s a distinct ‘britishness‘ to its punk attitude, one that recurs throughout the album. What’s more is that tremolo-picking, djent riffs that shudder more than they groove, ambient keys, and fretful high-pitched notes all make appearances in this otherwise low-key track, all without overwhelming it or making it feel jarring.

What I appreciate is that rather than double down on their grunge roots, Phoxjaw have chosen to flesh out the elements of their signature sound I wouldn’t have expected them to, namely the more chaotic, metal-rooted bits. While A Playground did this too, Royal Swan does so with more vigor and character. In doing so, the band manage to set themselves apart from their contemporaries – a crucial win in a scene that’s teetering towards oversaturation.

Take for example album highlights “You Don’t Drink a Unicorn’s Blood” – both melodic and apocalyptic – and “Bats for Bleeding”, built around a swarthy carnival waltz. Both exemplify the album’s strengths – the two aren’t particularly similar, yet both demonstrate a restrained theatricality that none of their contemporaries possess. I feel an apt description for what they’re going for here is the musical equivalent of a classic Shakespearean play performed in a grotty abandoned construction site. While fun, the album feels more skewed towards the abstract, and less like an exercise in teen angst.

That said, another element of their sound that’s been further developed on this release is a streamlined radio rock sensibility that borrows from early 2000s wall of sound alternative metal and 2010s Imagine Dragons-esque pop rock. Songs like “Infinite Badness” are what Deftones would sound like if they whooped ‘Oh-Whoa-Oh‘ over their choruses. While I find these sort of tracks to be the least interesting and weakest on the album (and there are a fair few of them), I commend Phoxjaw for being able to pull them off with confidence and competence. Single “Half House” – a good example of what I mean here – features an abrupt detour into very dark territory towards its end, and it’s this sort of attitude to their arrangements that I deeply appreciate, regardless of whether the song was my favorite or not.

Royal Swan is a strong debut album. It’s fun, well-written, and earns its place amongst the emerging darlings of British alternative rock with a take on 90s alternative that’s distinctly their own. While at times I find there’s more Deftones and Mike Patton in the mix than I’d like, the album nevertheless remains one of 2020’s strongest hard rock releases so far.