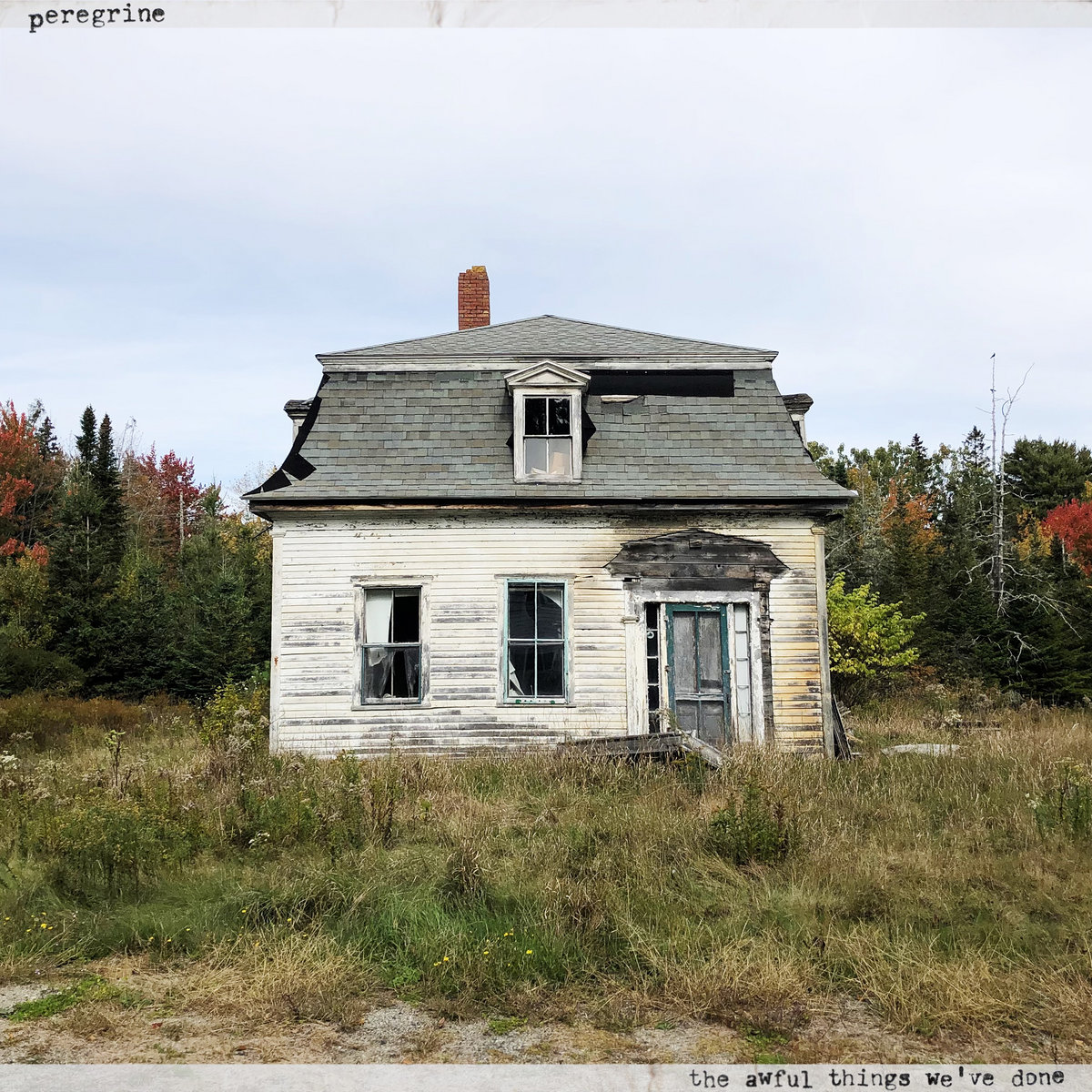 Peregrine deliver a cathartic dose of classic emo dashed with a little noise and so much more.

I absolutely love emo music and everything remotely close to the genre. One of the biggest selling points for me on ’emo’ music is how diverse the genre can be. Peregrine, ‘A music collective (sort of) supported by revolving contributors based out of Worcester, Massachusetts‘, deliver with some of my favorite stuff to grace the genre in a minute. It is a wonderfully diverse and beautifully nostalgic album- the awful things we’ve done. In 45 minutes the group experiment with noise and field recordings, alternative rock, psychedelica, post hardcore, and twinkly Midwest emo. All of this mingles together into an awesome album that feels simultaneously pulled out of 2001 and also tastefully fresh.

Peregrine hit the ground running with the boisterous opener “a polite merlot”. From the opening second you’re hit with kind of harsh, distorted guitar riffs and a rooted rhythmic section that falls into a steady groove quickly. It’s fast and energetic, especially when it finally reaches the chorus, a rousing and catchy one accentuated by a lofty vocal performance. The vocals are one of my favorite parts of this album. They bridge somewhere between the passion from Cove Reber of Saosin, the gravitas of Jesse Hasek from 10 Years, and the measured performance of Ben Gibbard of Death Cab For Cutie. “a polite merlot” ends with as much abruptness as it begins, diving right into arguably the most interesting part of the awful things we’ve done. “breathe: subsist” is a jarring and kind of unnerving interlude that is packed with layers of noise and an indecipherable voice recording. It crawls under your skin and leaves you with a feeling of unease, but at the same time washes over you with waves of soft noise that are soothing.

“the sixtieth harvest” is the song that makes me compare this album slightly to 10 Years. It starts off as a spacey kind of alternative rock song, and the vocal performance gives me incredible Jesse Hasek vibes in a great way, showing a great range and power. At the midpoint, it shifts to wearing its little emo heart on its sleeve, with harsher guitar riffs and more shouting to the singing. This is also one of the first licks of psychedelic rock present on the album, with a hazy and washed out guitar part towards the end. When I first heard that it made me really excited, as I absolutely love that shit. “a room full of bees” is one of the most nostalgic songs on the album. It channels the early 2000s with its bouncy, driving rhythm, and staccato guitar melodies. Its use of layered, harmonizing vocals really brings that vibe out, and also makes for one of the most upbeat and entertaining songs on the awful things we’ve done. It ends with a slow and melancholy guitar bit into a field recording of someone walking through grass with the sounds of insects chirping all around. It’s eerie, blissful, and oddly perfect in execution.

“exorcism USA” begins as a somber guitar melody comes in over the recording. The first line of haunting vocals comes in as the sound of insects subsides- ‘Something is coming/ A weights been there for a while now/ Invisible to the naked eye/ Seeps into every tiny crevice‘. Powerful bass and a steady drum beat thunder in with a vibrant, reverb-laden guitar chord and it’s really hard not to love the flawless execution. There’s a really sudden and ridiculously impressive psychedelic solo in the middle of this song that I adore. It’s steeped in reverb and effects galore with a healthy amount of noodling and soulful licks. It ends with the rhythm guitar laying down a steady foundation, backed by more atmospheric psychy bits. It picks up fervor with chunky low end and an incessant bass kick that even goes into a blast beat for a bit. It ends up being one of the most diverse tracks on the album, and was the first moment I started really falling in love with it.

Perhaps the most nostalgia-inducing track on the awful things we’ve done is “sagittarius A”, a softer and more acoustic guitar focused song at the start that ramps up in a wave of past regrets. It’s a song lamenting wasting time and looking back at mistakes and where you are in life now:

‘This is not the way I wanted to be
Looking back over nothing at all
Instead of a time well spent, its regret that fills my memory vault
Not the place I wanted to be
When I realized everything was wrong‘

“the reply” is a through and through classic Midwest emo banger, beginning with mesmerizing twinkly guitars and a sense of wonderous longing that evokes everything the classics in the genre cemented as fundamentals.

What is probably the most impressive vocal delivery of the whole album kicks off the start of the poppy “backpack”, as MacKinnon hits some impressive notes. This is another really fun one like “sagittarius A”, packed with catchy staccato riffs, dual vocals, and a really memorable chorus. It ventures into classic post-hardcore territory as it continues, going all the way into a breakdown that would be sure to open up a pit with the right crowd. The whole album is just persistently impressive, and continued to incorporate elements and moments that solidified it as one of my favorites of the year from the first listen.

No review could really be complete without diving into the incredible final track of the awful things we’ve done– “the awful things”. The intro has huge Death Cab vibes, a subtle, stripped down alternative emo with light guitars and vocals. A soft drum beat comes in as a second vocalist heightens the performance with a great harmony. “the awful things” is incredibly pretty, and slowly packs on intensity as the instruments and singing all get louder and a bit more aggressive. It goes into the solo of the year so far for me, one that had me audibly exclaim as it continued. That saturated, reverb-laden psychedelic guitar comes back in full force with soulful bends and pinches. It goes into some super fast noodling that I was absolutely not expecting, and I love it every single time I listen to it again. The last minute and a half has more of those nostalgic gang vocals before going back into the somber guitar melody that begins the song. It’s a perfect end for an album I cannot get enough of.

Peregrine began writing this album in late summer of 2019, and by the end of recording in 2021 ‘multiple people reached the point of feeling they could no longer continue with this project‘, according to their Bandcamp (which also seems to be the only place to find them online). the awful things we’ve done is rife with angst, anxiety, and desperation, and is an effort to reflect their feelings during that time period. We all know the world events that transpired during the writing process, and have heard its impact on the music industry and artists through everything released since then. It seems to have taken a toll on Peregrine, and the resulting album is a heavy catharsis. It has some high points with tracks like “backpack”, but this is a work that is evocative of the stresses of life and the trials experienced along the way, even with this album. I think it’s a wonderful testament to its name, as Peregrine really do seem to be lamenting all the awful things they feel they’ve done.