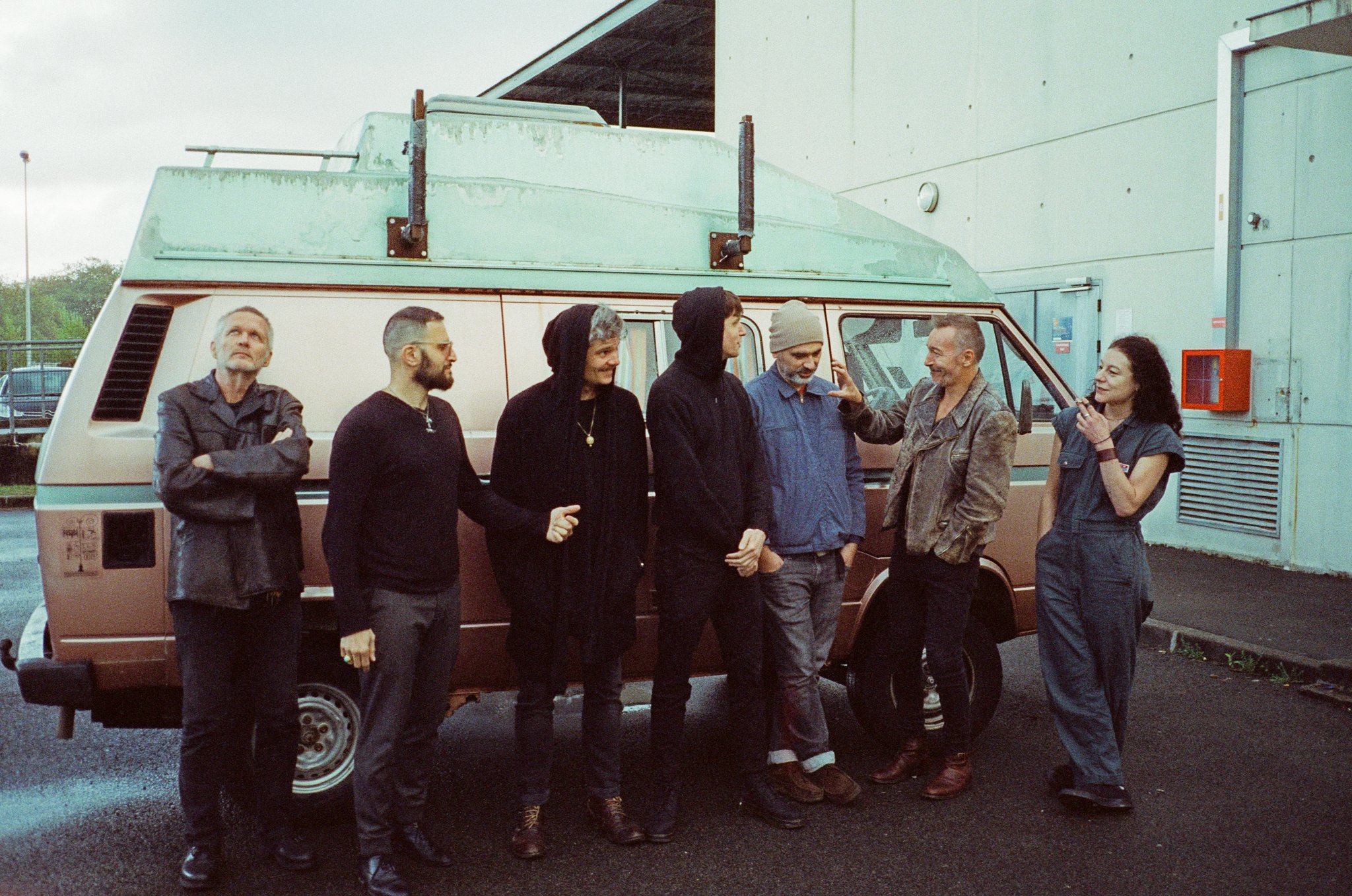 The French avant-garde group Oiseaux-Tempête delivers us what might be their most complete and sophisticated album to date with What On Earth (Que Diable).

Okay. This article should’ve gone up over a month ago and, as a review, is terribly late as per our standards. The reality is, however, that sometimes life gets in the way of even the most pleasurable of pastimes. For me, the reason to this particular delay is that the last week of October packed a bit more punch than what I could’ve prepared for. Not only did that last Friday see the release of this album, but the previous Monday saw the birth of my daughter. Not-so-coincidentally, listening to What On Earth (Que Diable) when driving home from the hospital at 5AM created a somewhat of a special bond between myself and the record. There also seems to be a recurring theme to this, as I’ve written about Oiseaux-Tempête before, having featured them as our WFA, and that article came out on my birthday last year. And as I’m finalising the review today, it’s my spouse’s birthday. Strange things.

My anticipation for What On Earth was off the charts the day it was announced, as is my love for Oiseaux-Tempête in general. There’s just something magical about the French experimental post-everything group and their eloquent endeavours, as they tend to hit the sweet spot whenever they do anything. There are very few artists who manage to touch me on a profound personal level the way that these people do, and because of that, I hold them close and dear to my heart year after year. I also appreciate the band’s inclination to push their limits further with each release and transgress different musical mediums to the highest degree, as well as their ambition to consistently truly nourish the soul. So, what on Earth is happening this time?

There’s plenty of music out there that requires concentration to grasp it, but the case with Oiseaux-Tempête is that not only do they demand (and deserve) your attention, they effortlessly become the center of it, and you’re prone to drop everything to fully focus on them. What On Earth (Que Diable) is a prime example of what the act is capable of, and I partly envy all of those whose entry point it’ll be to the band’s universe. Simultaneously, though, being familiar with them already adds a multitude of layers to the intricate and otherworldy experience that the album offers. There’s a ton to unpack on the 69-minute effort, and I can but try to form a coherent and an educated description of it. As the album’s out already, I’d recommend you to listen to it beforehand or while reading this, if possible.

Spoken vocoder parts, mesmerizing synth arpeggios, and lush electronic beats open the album in the form of “Black Elephant”. Right out of the gates, I had an eerie feeling that Oiseaux-Tempête has undergone yet another sonic shape-shifting process, and I was proven right throughout the album. “Black Elephant” forebodes what’s to come, and more or less sets the mood and tonality for the whole record. The band has never strayed away from ponderous and deep tones, but What On Earth truly revels in those musical chasms, demonstrating how you can achieve an atmosphere with mountain-moving strength and without needlessly suffocating the listener with a wall of distortion and noise. Oiseaux-Tempête has always flirted with sound design and field recordings that are super out there, but that’s certainly taken to a new extreme here.

After the opener subsides, “Partout Le Feu” washes over us with a krautrock-infused spy thriller vibe, topped with high-pitched synths and a mellow saxophone lead in the latter half. The track is perhaps the most rock/metal-ish of the bunch, as the rest rely mostly on the electronics showcased on the first track. Still, there’s no way we can summate all of it into a single lump, as nuances are present aplenty, exemplified by the hauntingly beautiful third song “Terminal Velocity”. The song acts as a bridge of sorts between longer tracks, mainly constituted of vocal swells and an ever-evolving music box/glockenspiel/whathaveyou melody that carries it for its rather short, two-and-some-change-minute duration. Without taking the wind out of the sails of the first tracks, this point on What On Earth almost feels like a restart, and the album properly gets going with the fourth song, “Voodoo Spinning”.

“Voodoo Spinning” is a perfect example of the sound design angle I mentioned earlier, as its flawless and immaculate flow with constantly expanding instrument palette does unveil Oiseaux-Tempête in their most refined state yet. Movement is key, and it’s truly stupefying how much the band can do within the confines of a single song while still somehow sounding completely fluent and effortless. There’s a mastery of its own to that, and it only gets more emphasized from here on out. “The Crying Eye – I Forget” is a thrilling twenty-minute epic that leaves no nook hidden, the monolith sprawling to near-uncontrollable dimensions throughout its elongated existence. I’ve always found fascinating the band’s usage of Arabic-influenced motifs that aren’t absent this time either. It takes a moment until those are properly presented, but once they are, they provide an immense gravitas to Oiseaux-Tempête‘s mien. Plenty of bands have utilised that thematic, for sure, but with Oiseaux-Tempête, it feels honest and has more depth; it’s all-encompassing, original, and true instead of moot, meaning- and senseless flirting.

What On Earth‘s pinnacle is found, oddly enough, in the middle of it. The pair that “The Crying Eye – I Forget” and “A Man Alone (In A One Man Poem)” create together is perhaps the grandest thirty minutes not only in Oiseaux-Tempête‘s discography, but in all of recorded music. Is that a bold claim? Yeah, might be. Surely this comes down to personal preference – I wanted to point it out not in hopes of clapback, but to underline that there’s is something seriously special happening here. “A Man Alone (In A One Man Poem)” collects most of the aesthetic ideas presented on the album so far and morphs them into a single song in a rather cohesive fashion. A definite high point, further ensured as such through G.W. Sok’s beautiful half-sung poetry. In this context – on this album, in this particular song, in this precise moment – I ascend.

Following up on these tracks is no easy task, but rest assured that Oiseaux-Tempête delivers as per usual. “Waldgänger” sounds like a fully realised version of “Terminal Velocity”, with more flesh on its bones, but without coming across as recycled or anything in that vein. If anything, it ties the culmination point of the album to its basis, lingering on for a long, long time after reaching its final destination. “Nu.e.s Sous La Comète” brings back the more standard band setting, with a structured tom beat carrying forward the song, first lead by an oddly groovy bassline, then paved with a piano melody that continuously transforms. As I said above, movement is key. While the dynamic track wanders a bit here and some more over there for all of its length, it keeps the intensity intact at all times without offering a release for the listener. It just keeps on building in and on itself, and before long it just… ends.

This intensity is something that What On Earth particularly feeds off of and thrives from. There are moments of pure bliss and catharsis along the way, of course, but the haunting and profound atmosphere is at the forefront at all times. This aspect especially reaches its grandest pinnacle during the final track of the album, “Dôme (Live at Oscar Niemeyer’s Abandoned Fairgrounds)”. The finale is filled to the brim with reverberations and echoes that fully submerge the listener, shining a light towards the field recording tendencies I briefly mentioned way back, and towards the end of this magnificent journey as well. While the band welcomes the listener into their internal world throughout the album, on this track you’re pulled right in the middle of everything. There might be some jump scares along the way, but hey – at least you’re feeling things.

What On Earth (Que Diable) evokes a sentiment echoed by its very title; in its essence, the album is a surprising and exhilarating experience, and bonafide ear candy on top of that with its unbelievably high production value. Oiseaux-Tempête, as a band, have hit a plane of excellency that they’ve been gliding on with ease for a few years now. It’s indeed been a month since this leviathan of a record was released, and I have to say, I’m a bit taken aback, flustered even, about how little coverage I’ve seen for it. What On Earth should be on everyone’s lips right now, and it should be topping whatever year’s end lists are currently being unveiled. I know it will be on mine, and I also know that it will be on yours if you give it a chance. Which you should, by the way. It’s fucking fantastic.