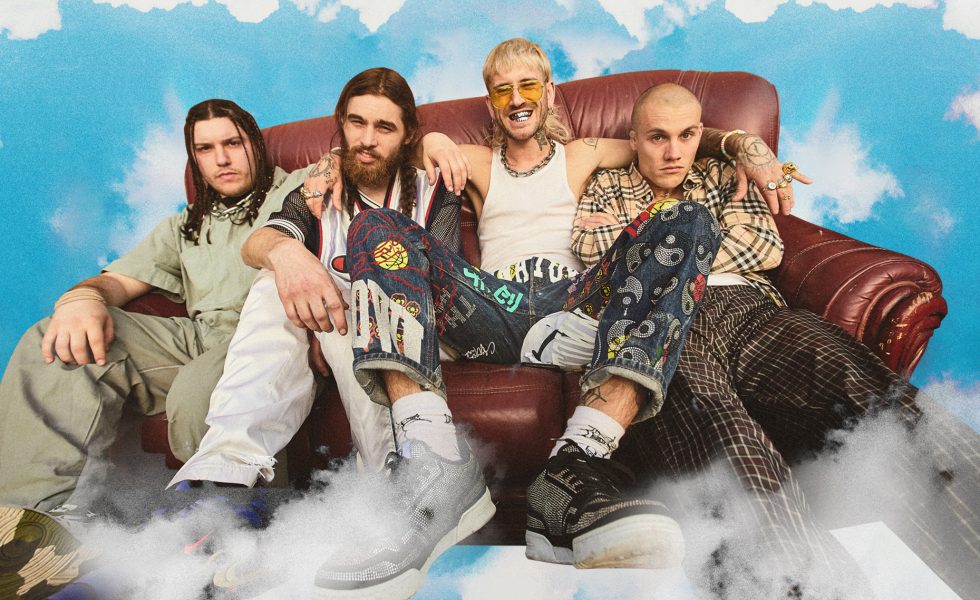 I’ll never forget the moment I first heard “Intimate Alien” by Ocean Grove towards the tail end of 2016. Released to promote their upcoming debut album The Rhapsody Tapes, I was blown away by its strange – yet intriguingly effective – layering of nostalgic 90s elements. Between its Korn-like opening riff and downtuned funk bass, vaguely oriental wah-leads like something off Alice In Chains’ Dirt, and post-hardcore-inflected rap vocal cadence, there was so much going on both familiar and new that I knew these guys were onto something fun and special. When The Rhapsody Tapes dropped a couple months later, I was proven correct. It went on to be my personal favorite record of 2017, tapping into a spectrum of my favorite sounds and memories of my youth, filtering them through a futuristic prism with results that could only be a product of their time.

The Ocean Grove collective’s future was cast into doubt, however, as lead vocalist Luke Holmes and guitarist Jimmy Hall announced their amicable departures from the band shortly thereafter. Ocean Grove were quick to reassure fans that the band would march on, with bassist and clean backing vocalist Dale Tanner stepping up as full time frontman, while soon after debuting The Beverly Chills’ Twiggy Hunter as his replacement on bass. How would this new iteration of the band fare, having lost their dynamic voice? Well, a string of new singles drip fed over the course of last year, finally culminating in the release of their sophomore album Flip Phone Fantasy on March 13, assuaged any concerns that the band might have lost anything, least of all their identity.

FPF is comprised of twelve tracks of past-meets-present heavy rock-fusion eclecticism that can be broadly split into two categories: nu metal-tinged bounce anthems and grand stadium belters. Within these two umbrella categories, however, the finer details explode with a huge range of tones, colors, influences, and fresh interpretations of vintage styles. Listening to this album is akin to experiencing a dream set to a soundtrack of 2001’s greatest radio hits, except that all the best bits are swapped around and distilled into the record you wish you had back then. Every song is a hit, a callback to the best of the biggest bands of those days, and while this might suggest an overly backwards-thinking affair, the whole concoction is – much like its predecessor – interpreted through a hyperreal post-modern lens, resulting in an album that is instantly recognizable as contemporary.

On paper, this is a disparate album, flying all over the place without direction. While the band has stated that it was written to unfold like a mixtape of different styles from the era it mines from, I found the experience to be far more cohesive than The Rhapsody Tapes. Common threads are found from beginning to end, be it the muscular guitar riffs that course through even the calmer tracks, the shimmering, dreamlike lead work carried over from the previous album and expanded here to be included on each track regardless of the genre that’s being toyed with, or the versatile vocals that alternate between quirky and powerful in a way that’s instantly identifiable as Ocean Grove. Tonally, the album has discarded virtually all of the darkness present on previous material. Although OG were never ‘dark’, The Rhapsody Tapes had moments of ominous introspection that aren’t present here. FPF’s aggressive moments don’t feel sourced from a place of darkness, but rather an empowered and almost juvenile bravado and belligerence that’s just plain fun.

One of the greatest surprises for me going into this was the sheer vocal versatility on display. In his previous role as backing vocalist, Tanner specialized in grungey clean vocals, and I initially assumed the loss of Holmes (who handled the rapping and screamed vocals) would divert the band deeper into alternative rock territory. That’s not the case, though, as they have actually doubled down on the rapcore elements, showcasing Tanner’s previously unseen range while also giving him sufficient room to deliver the vocal hooks he excelled at previously.

Hooks are something this album boasts in abundance. These are effectively pop songs with a twist, and the hooks manifest in different dimensions depending on the song: be it album opener “SUPERSTAR”’s massive main riff (quintessential nu metal, but with a razor-sharp distinctiveness that’s hard to describe in words), the chorus of “JUNKIE$” with its slurred grunge delivery, or the sultry female vocal slam dunk that follows the chorus of lead single “ASK FOR THE ANTHEM”. Furthermore, these hooks are packaged in optimized pop song structures that push the verse-chorus template to its limit; instead of relying on simple repetition of hooks, subtle – and occasionally not so subtle – variations are introduced in layers, often with the second verse utilizing different vocal cadences or rhythms than the first, or minor variations on a motif. What this means is that while listening, you’re constantly being subjected to new elements or twists, making the album feel more brisk than its already lean 37 minutes, and utterly devoid of filler…if you’re a fan of FPF’s particular sonic palette.

Herein lies the only potential criticism I have for this brilliantly crafted party of an album: it’s written for a very specific set of tastes. While there is much to appreciate in terms of the pure craftsmanship of densely layered tracks such as “Sense Again”, drawing from britpop acts such as Robbie Williams and Oasis, 60s psychedelic harmonizing, and nu-metalized grunge, you’re unlikely to enjoy the mashup if these reference points are not to your liking. The chorus’s Puddle of Mudd-inspired drawl is as likely to turn away listeners as it is to pull them in, although I suppose this is the risk any band takes when crafting a sound that’s both eclectic and heavily derived from previously maligned genres. That being said, I do hope detractors will give it a chance, as these same traits mean there is a wide spectrum to sample from. FPF has as much in common with The Prodigy and Nirvana as it does with Limp Bizkit or Puddle of Mudd, all while sounding like its own thing. If you go in expecting to have fun, then I believe it will be a rewarding experience for you.

As a side note, my only personal gripe with the record is with song “Sway”. It’s an interlude, and man was it robbed of being a fully fleshed-out song. Its sultry trip-hop swagger deserved better.

As a fan of Ocean Grove, Flip Phone Fantasy far exceeded my expectations. From a more objective perspective, I believe it excels at what it was designed to be – an open and honest celebration of the early 2000s musical zeitgeist, molded into an experience colored by Ocean Grove’s distinctive guitar tones and playful vocal inflections. It is likely the most pure fun I will have with an album this year, while also being intelligent and expertly crafted. I commend Ocean Grove for coming back triumphantly after a line-up shake-up that might have ended another band’s career. Flip Phone Fantasy is bold, surreal, experimental, and larger than life. Both aggressive and uplifting, it’s a likely career milestone that I feel certain will propel the band into the stratosphere.