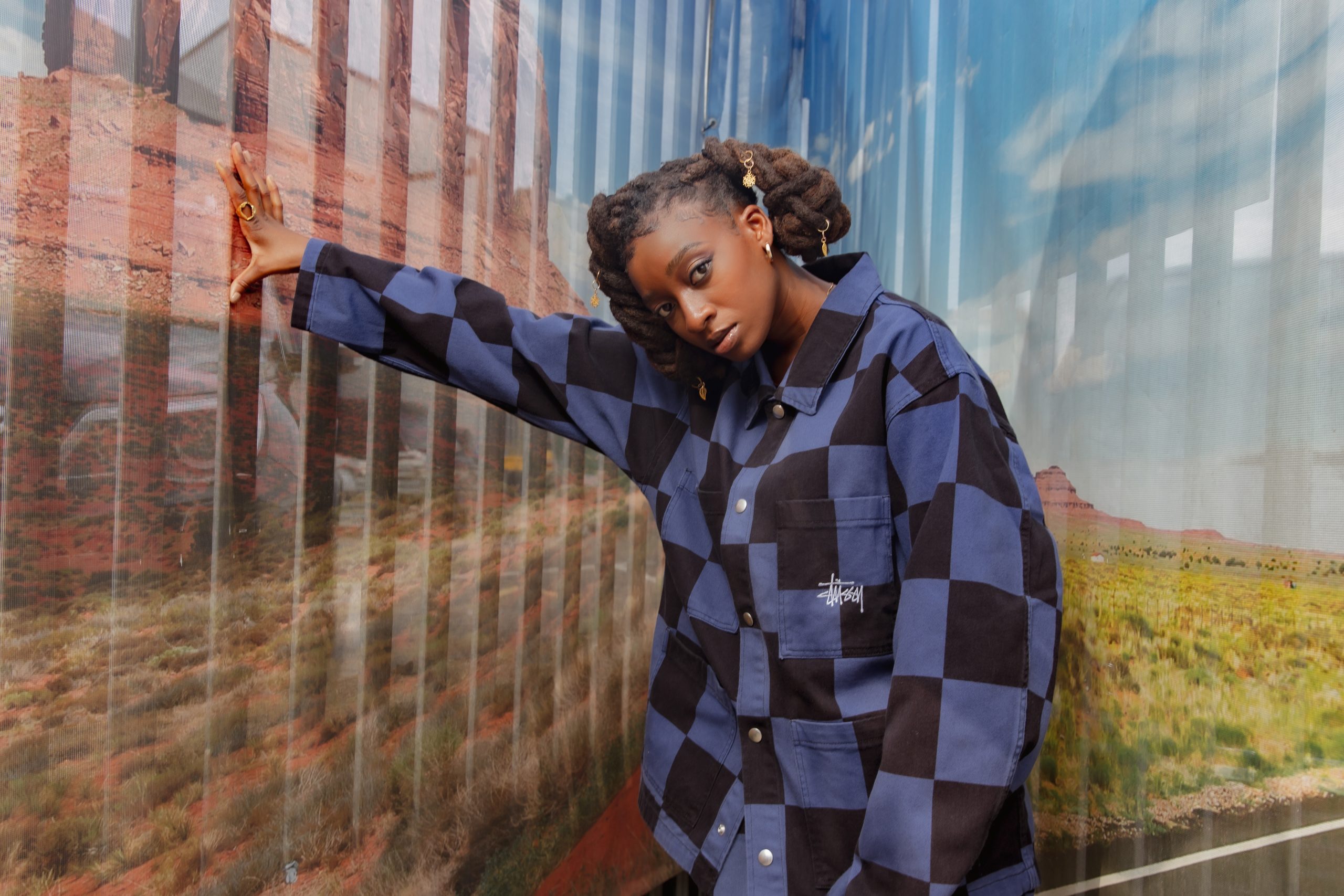 Little Simz – “NO THANK YOU”

By David RodriguezJanuary 14, 2023 No Comments

You’ll say ‘yes please’ to NO THANK YOU, a victory lap of an album for Little Simz where she expounds on many themes presented in her massive SIMBI album.

I think I get why a lot of popular publications publish their albums of the year lists in mid-November – they don’t want to contend with the possibility of nearly infallible artists dropping straight fucking fire in the last two months of the year and ruining their whole plans. Does that make it right? That’s subjective, but I think no. Does it make it easy? Yeah, I bet. In December alone, we’ve gotten three AOTY-worthy projects from SZA (yeah), Ab-Soul (apparently – I haven’t listened yet), and Little Simz (of course). These have been veritable nukes to what were believed to be solidified lists, formed like houses of cards or Jenga towers, but just like both of those, they fold to even the slightest pressure from someone with the power and desire to do so.

‘New Simz drop to shake the whole shit up’

EIN? We don’t have that problem. After moderate deliberation – weighing recency bias along with the fact that, well, this was Little Simz we were talking about – we decided to (spoiler) add NO THANK YOU to our AOTY list, which is yet to be published as of this writing, as a last-minute addition. Perhaps it was predetermined by the sheer fact that it was a Little Simz project. No one is grandfathered in by virtue of their past work, though. It still must pass our normal scrutiny, whatever that is.

‘Name one time where I didn’t deliver’

Yeah, I feel that, Simz; you ended up on our AOTY lists the last two times you dropped an album. But we have a process. Is it good? Is it different? It is exemplary of a genre, scene, region, or other community of creators of which you are a part, new or old? One listen should give you the answers. I’m sure you know where this is going.

The two separate bars I quoted earlier are from “Gorilla”, the second track of NO THANK YOU, where Simz is back squarely on her bullshit, feeling herself in a way that’s simultaneously humbled and indicative of her high stature in UK rap. Hell, it’s bigger than that now – Simz has been on NPR‘s fabled Tiny Desk concert series and even The Tonight Show Starring Jimmy Fallon which is, somehow, still an American late-night institution. A lot’s happened since she’s declared so much of herself in the lauded Sometimes I Might Be Introvert. She should be talking her shit. So she is.

Like SIMBI, NO THANK YOU feels grand, just on a smaller scale. This is great – scaling too many large peaks in a row can be tiring. There’s less apparent conceptual threading here, likened more to GREY Area than SIMBI. No skits to flesh out a greater narrative or story, it’s more raw Simz: bars, live instrumentation, and the sense that she’s got it all figured out even as she openly raps the opposite. That said, there is a point, and it’s nicely summarized in the statement she made when she announced this album a week before it dropped:

It becomes apparent pretty quick that maybe the aforementioned shine and recognition she’s gotten worldwide for her work is quite the double-edged sword, and now Little Simz must fight for her peace, soul, and life when so many people and forces will likewise fight to wrest them from her in the pursuit of whatever they want, mostly profit though. All of the songs on NO THANK YOU embody at least one of the sentences in her statement and it makes this album feel like a deeper exploration into the mind of Simz that she already gave us a vast, personal look into on SIMBI. Let’s break it down.

You could convincingly argue that music itself is energy in motion and/or emotion which is therefore energy in motion as Simz says, and there’s a lot of it here. She is loving and appreciative, confidently fed up and reflective of drama and bullshit, and vulnerable with how she’s finding her comfort zone with suffocating fame and demons ready to jump around every corner. Her even-keeled rap style shows someone who has seemingly set the emotion aside which means you only have to pay attention to the words she’s saying. So often, we as a white-dominant, patriarchal Western society police the tone of women of color, particularly Black women, to the point that we have very harmful stereotypes built on it. I’m not saying that’s a conscious reason on Simz’s part to rap the way she does, but it does help inform how you can take the pouring of her heart and mind out onto the rap canvas. Listen, don’t dismiss, and understand with empathy.

“Heart on Fire” really shows that duality of fame and how it becomes a curse you’re locked into by contracts or obligation, and no one of import really cares as ‘long as the gravy train runnin”. Simz even traces what her own mentality likely was when she became aware of her advantageous ability and talent along with how lucrative it could be, offering a chance to change life for yourself and others around you:

Later, in “Broken”, Simz similarly remarks on the grim reality of generational poverty and the individualistic attitudes many feel forced to adopt to escape it – ‘Crabs in a barrel, your neighbour feelin’ the same shit/But he might screw you if someone offers a payslip‘ – but she also touches on mental health, insecurity, loneliness, all crippling things when not managed well and make you broken to yourself and others. It’s relatable as hell, even if you don’t identify specifically with the experiential aspects she raps about. She encourages us with prayer, affirmation, and the comfort that someone understands that life wasn’t meant to be constant agony and confusion. Simz raps from experience; even if it’s not her own, her stories are steeped in realism.

I love her flow on “No Merci” which plays so well with the percussion on the track. Each verse is flanked by these flaunty string arrangements that form the primary melody of the track. Lots of great quotables here having to do with honoring truth and feelings:

‘Givin’ ’em our truth and they gave us blackface
Why you wanna make a mockery of my pain?
Way too long we been carryin’ the shame
If we knew we had magic, would we put needles in our veins?
That’s that selling-us-a-lie shit
Keep us low, then we get high quick
And it doesn’t change’

Boundaries are a big part of Little Simz‘s interrogation of her life and time. She’s been pushing back on wack, intrusive shit for years – another mechanism of survival for young Black women who are constantly interrogated themselves – but it almost comes to a head here on NO THANK YOU (even the title itself is her putting her foot down, in all caps even), especially on tracks like “Silhouette” where she refuses to make herself small and battles to maintain independence. She’s not afraid to ask questions she doesn’t have the answers to yet, using them as a call-to-action for us to consider the same things she is, overbearing fame or not:

‘Never knew how much I needed to set some boundaries
If you were a fan of me, how can you be mad at me?
Lettin’ go isn’t easy, I’ll admit and it saddens me
If you knew how this has made me question my sanity
How could I ever doubt my truth and what I’m feelin’?
It’s better revealin’, we all need some healin’
Rackin’ my brain tryna discover the meanin’
Who even knows?’

At the end of it all, NO THANK YOU just feels like yet another step in how Little Simz is processing life. At only 28 years old and already done more than 99% of people will do in their lives, she’s chosen to use her platform to do so much. She looks in the mirror and says ‘all I wanted to do was uplift the women‘ in “Broken”, fiercely combating the monsters of misogyny and racism while processing her own exponentially complicating life. It’s not so much ‘boo hoo, I’m rich now but still sad’, but a more measured look at the problems that affect literally all walks of life while leaving ample room to examine specific issues facing women and the Black community.

Using production from frequent collaborator Inflo and orchestration, it feels like the whole world is on her side, embiggening her presence like she’s scaring a bear with no semblance of personal space. There’s even a short film that accompanies the album with striking imagery as Simz burns through key parts of several songs from this album and more keenly visualizes what she wants to get across, not shying away from more troubling imagery. A must-watch for fans and newcomers alike. If you pressed me for a critique, I got one: the sample on “Sideways” is a bit too loud in the mix, distractingly so. Don’t know if that’s a streaming issue, but it was a bit grating to me.

There’s ethereal qualities to NO THANK YOU just like there were on SIMBI, but they feel more settled here, less showy. And don’t get me wrong, I’m all for showy, but dialing them back has allowed Little Simz even more room to speak her truth and talk her shit alike.  The songs here are meaty too, not just three-to-four-minute standards – she plays the long game and utilizes every second with meaningful verse after verse. It’s just another day for her, but don’t let that paint a picture of mundanity or her lazing around. The fact is she’s one of the best going right now. Comparisons of her to Kendrick Lamar may be tired and reductive, but there’s more than a grain of truth to it because Simz is on GOAT trajectory.