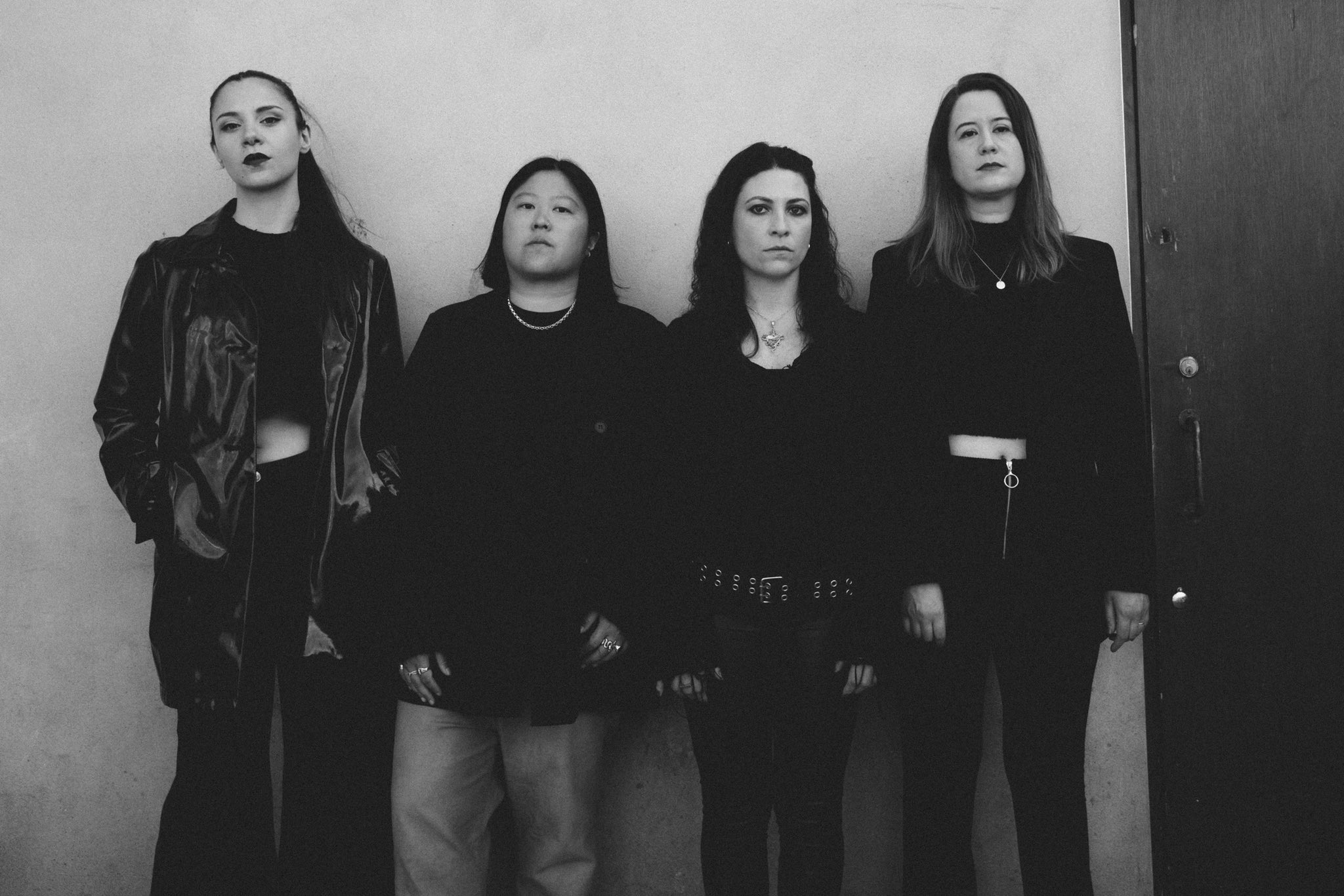 Debut release Bitter by London-based post-punk outfit GHUM delivers nothing short of a nostalgic feel, with its own unique style to boot.

From the time this album began its spin to when it concluded, I found myself more and more wrapped up by GHUM and Bitter. The vocal delivery of singer Laura Guerrero Lora paired with the melodic, catchy, yet abstract power of the guitars and bass make way for a fun, haunting, and passionate culmination of everything listeners love about post-punk and the ‘indie rock’ genre in general. This album featured far too many favorites for me to really hone in on any one single track. However, I’ve highlighted a few below and will delve into what makes this band so unique to me upon listening using each as an example.

For starters, opening track “Some People” works as a strong tone-setter. We are immediately greeted with feed-backing goodness, driving bass, and an pumping drum beat that demands your attention, and this is only 10 seconds in. Guitarist Jojo Khor is definitely working her way up the ranks into one of my top favorite guitarists with her unique sense of melody and how she makes a guitar part shine without being too flashy or overly distorted. There’s a similar case with both bassist Marina MJ, who appears to have a talent with bring the bass’s presence back and having it stick out in its own way as well, not to mention how much I’m loving the accenting tom and cymbal work heard in drummer Vicki Ann’s beats.

I don’t think I’ve heard many songs that excited me upon first listen the way “Over and Over” and the title track “Bitter” did. I feel like “Over and Over” missed its place on the soundtrack to The Last of Us, or at least I could definitely see it being used in that live-action series HBO was talking about doing (and, as far as I know at the time of writing this, still plans to produce). There’s a flavorful darkness to this track, something that gives me a vision of downtown Philly in the evening time, and it could be either summer or autumn; you just lit up your favorite candle, have your window open, and you’re sitting out on the awning roof that extends from your window of the townhouse you live in. You’re just watching what’s left of the day fade as you stare up in the sky and think about everything and nothing at once. Did that sound poetic enough to get you to listen? Good, because you should.

“Bitter” comes right back to that upbeat kick we heard in “Some People”. I’d almost say this is my favorite track on the album, but it’s hard to pinpoint that exactly when songs like “Perro” and “Echo” follow. Regardless, “Bitter” packs quite the punch. Thanks to the guitar part that almost reminds me of Bloc Party’s “Helicopter” but much edgier and grittier, this song’s been stuck in my head all day, living in there ‘rent-free’ and whatnot, as some of the youngins say these days. For being under three minutes in duration, this song covers some emotional depths:

One of my favorite moments in the song, lyrically, Laura is pulling no punches with what seems to be an examination of the difficulties of any form of emotional attachment once trust has been shattered time and time again, and how a cold, calloused heart can’t help but wonder once that new someone comes along – ‘What’s the catch…?’

‘You are the only reason I’d put myself through this…’

Not only is this chorus catchy as all get-out, and not just due to its repeated first half, but the lyrics somehow project a hard-hitting blow onto the listener. A sting of familiar proportions; one that is unfortunately of stark relatability. The best way I could summarize this entire track is probably ‘energetically dark’. All the gloomy, crooning, dreary elements of a gothic serenade are present, yet that same grit, upbeat rhythm, and sing-along nature heard in punk and other indie rock also make themselves known, full front and center. This was a truly great track to be listening to while pulling up to the job site on my commute this morning. Thanks, GHUM! What a way to help me get through the day!

Even the closing track, “Rivers”, relents nothing in its 7:18 span. Normally, I have mixed feelings about the longer tracks, but the end of the album seems to be a pretty safe place to put these if done at all. This song has a death rock feel to it, almost like a ballad of sorts, but doesn’t drag on or hit any down moment over its course. While most of the lyrics seem to be repeated, Laura’s back at it again with the gut punches:

‘Our house is on fire, and I don’t want to leave…’

Such simplicity, yet awfully poetic. Yeah, I’ll go ahead and say it now – I love Laura’s vocals, and she is quickly turning into a top lyricist for me personally, too. The more I relisten to this album (don’t worry, it’s only been about 647282983 times, not, like, anything obsessive or anything weird like that), the more I find to enjoy about the atmosphere and tone of it, as well as another lyric line that sticks with me. So basically, what I’m trying to tell whoever reads this review is simple – I’m soon to be completely covered in tattoos of various GHUM lyrics and likely avoided by even their most die-hard of fans due to the cringe that entails. Or not! Maybe, just maybe, they’ll find amusement in that. Rest assured, my financial adviser will not.

GHUM has sold me on Bitter. I’ve already been sharing it around to friends, and certainly will keep an eye out for what lies ahead with the band. The sound, to my ears, reminisces on the glory of early-to-mid 2000s indie rockers such as The Bravery, Bloc Party, and Interpol, but by the same token, I get the feeling this group has at least one St. Vincent, Depeche Mode, or Dresden Dolls vinyl lying around somewhere. Laura’s vocal style stuck out to me in a similar manner as Amanda Palmer’s, or perhaps even Ellen Roswell (Wolf Alice), but I don’t want to compare her to anyone too much, as she has undoubtedly cut her own path as a vocalist.

If you’re in search of some great new music that hits the notes of nostalgic indie rock titans while cutting its own modern flair and still managing to stick out? Look no further than Bitter! GHUM have more than just potential with this release – their future is one I’m excited to see unfold. If this album is the place to gauge their merits, it is without question that they are headed for great things. Excellent work, GHUM!