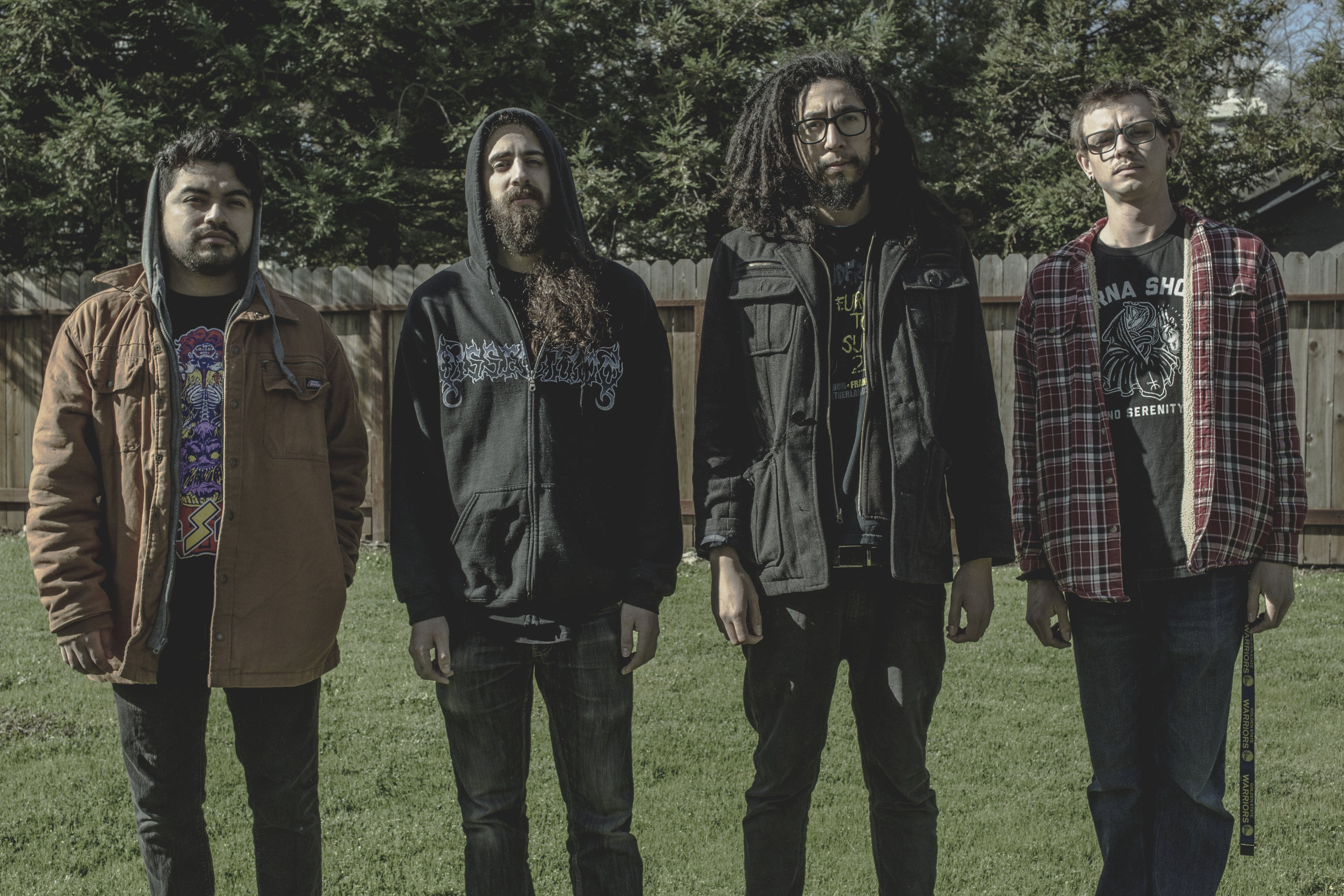 By Robert MiklosJune 6, 2019 No Comments

Progressive death metal becomes an increasingly rich territory with every passing moment. In spite of all the excitement surrounding Flub‘s debut album, it doesn’t exactly enrich said territory in any particular way.

Hailing from Sacramento, California, progressive death metal band Flub follow-up their two EPs with their self titled debut full-length album. Flub is comprised of some top-tier musicians with Alterbeast vocalist Michael Alvarez, former Vale of Pnath guitarist Eloy Montes, Rivers of Nihil drummer Jared Klein, and bassist Matthew Mud. They have been an active band for the past six years and now they hit the stage in support of their new record. Of course, debuts deserve a pinch of slack because of their condition as a first, but even said slack doesn’t cut away from the flaws that are present.

We are presented with a rather mystic looking cover art and even a rather appealing story-line (by the genre’s standards at least) that stretches back to previous releases in a cryptic and ciphered fashion. The story speaks of a hero who has failed in his quest and is left to wander aimlessly, eventually reaching a turning point during a near death experience which propels his sense of meaning forward. One could argue that at least from this angle there’s enough to keep the whole package together. Unfortunately, this doesn’t really enhance the record at hand.

Stylistically the album is your classic progressive death metal affair with some notable distinctions. There are some chunky deathcore sounding influences splattered across which surface in the form of meaty riffs and a few breakdowns. This transpires quite neatly during the opening track of the album, “Last Breath”. The vocal delivery alternates between a classic death growl delivery and some truly piercing black metal-esque shrieks intertwined with the occasional clean parts as well. Aside from the symphonic tinges that are sprinkled throughout we have some brusque breaks into some oddly jazzy sections. The diversity is quite welcome by all means but the way the transitions are executed make the whole affair feel somewhat idiosyncratic, or simply put – out of place. This would be especially visible during the first part of “Rebirth”, as the song opens softly it is cut abruptly to the formulaic blend that was already cemented. The synths that give pulse to the symphonic elements offer a contrast that simply doesn’t jive with the arrangement over which they fall. The jazzy breaks seem to cut rather sharply in a way that just doesn’t surprise pleasantly nor do they feel tastefully put together. This is made all the more disappointing considering the great musicianship present.

I would say that the album’s strongest point is the production value. Everything seems to be well separated yet homogeneous enough to keep an organic feel around. The instrument tones are without reproach, everything sounds great from this point of view. This is great because it distracts us from the formulaic songwriting. The songs really lack something that I would call memorability. There isn’t really any segment that actually sticks to memory in spite of the fact that the segments themselves sound solid at first glance. Nor does the overall feel of the album offer a musical narrative that adheres to the lyrical narrative in any way. The riffing doesn’t really stand out, save for whenever it hits a more groovy area. The lead guitar doesn’t really go outside of what any death metal band would play. The drums and the bass simply offer a bedrock for all the other elements to unfold. While the vocal delivery is impressive in prowess, it too does not stray from the classic tropes of the genre. The most memorable song of all, in my opinion, would be “Wild Smoke”. That is something of a plus since it ends the album on a high note.

Flub may show more than a good deal of promise as a band but they still have some things to work on. It is indeed reassuring that there is a lot of passion, dedication, and drive, however that isn’t always enough to pull off a good album. While, for the lack of a better word, aesthetically the musical package that is being put forth is virtually sound it requires a great deal of tinkering in how its innards are designed and assembled. Sure, this may not be the best such album out there, but we can look forward to what the band will eventually mature into.