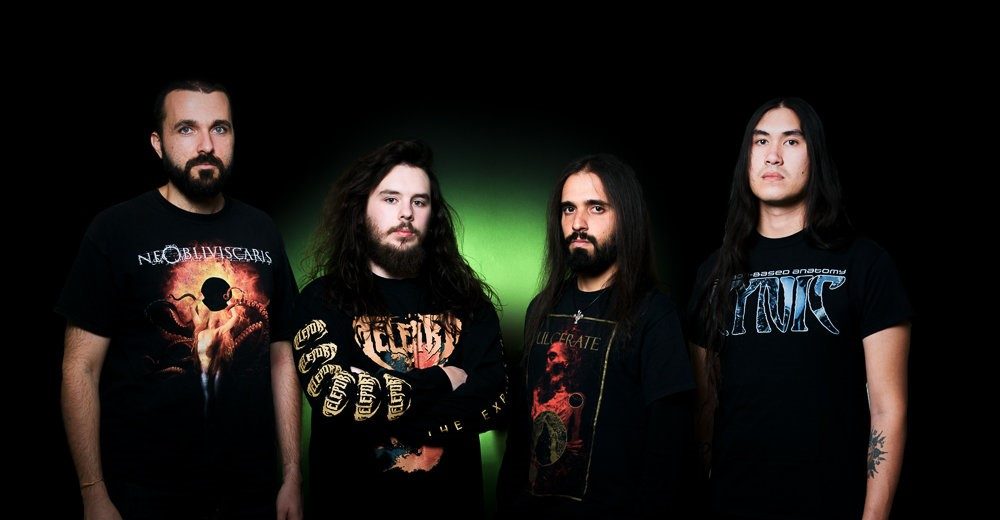 By Carlos Vélez-CancelNovember 10, 2020 No Comments

Italian tech/prog death newcomers Coexistence take over the cosmic waves with their debut full-length Collateral Dimension, bringing to the table consistent songwriting over simply becoming one of many within the subgenre.

Stumbling upon music as chaotic as tech death at a relatively young age was truly a joy. For years I was subjected to its clutches and was thrilled with the varying, hyperactive soundscapes flowing through my synapses like a swarm of wasps completely done with your shit. That being said, this subgenre was not immune to getting saturated with formulas, and after a period of trying to find a band that revitalized the sound I came to love, I gave up. Something that was so alien in comparison to other genres of music, I became desensitized to it. Collateral Dimension is a response and an honest effort to tackle this unfortunate outcome, as Coexistence deliver a full-length that maintains the very customs that put technical death metal on the spot, while also giving the uttermost care to strong songwriting.

Opener “Metaphysical Essence” starts off with a reminder that this record is definitely a tech death record to the core. The sci-fi sensitivities embedded in the song title, lyrics, and the spacey entrance are quickly met with the thundering coupling of the guitars and bass. The crisp production further accentuates the sheer technicality of the instrumentals, not only showcasing prowess, but exhibiting power. What made me pause for a second and decide to really dig deep into this record, however, was the groove during the mid-mark of the track, hitting me right in the face. I did not expect that at all, I said to myself. Granted, this is nothing new within the tech death territory, regardless it was a pleasant surprise to see a band giving both rhythm and technicality the same care and attention. Needless to say, I was intrigued with where the record would take me from there.

The qualities presented on the aforementioned first track are spread throughout Collateral Dimension, putting forth a satisfying blend of neatness and heaviness. Apart from the excellent demonstration of technicality, there are dynamics here that maintain the record, moving forward. Be it the chugging riffs throughout “Detached from the Abyss” or the soaring melodies found on the interlude “Perception”, the subtle varieties Coexistence display on this record for sure avoids them being lumped in with their contemporaries.

It is pretty hard to refute that a subgenre like technical death metal is not without its share of senseless competition. That is to say, many bands are subjected to merely relying on virtuosity, and leave convincing songwriting as an afterthought. At least that is what has stopped me from seeking more bands of this nature. Coexistence are one of the few that managed to dig out of this musical rut, excelling in being technical and coherent in their compositional flow. “Eclipse” is an excellent example of this knack for songwriting. A excellent tech/prog death metal track, it is flexible enough to be catalogued in other metal subgenres. The way it progresses tells a story capable of demonstrating different moods musically.

Such compelling songwriting is further applied to the melodic sections scattered throughout the record. The musical break on “Revert” and the introduction for the epic closer “Floating in the Celestial Wave” bring grace to the otherwise heavy tracks, constructing levels and depths that strengthen Collateral Dimension for a thrilling cosmic aural journey. Considering that it is a highlight for me, I am intrigued to know if they will continue implementing these stylistic choices on future releases.

Although I’ve already discussed their songcrafting abilities as one of their strengths, Collateral Dimension is not without its shortcomings. After repeated listens, I find that some of the tracks can blend into each other, eventually becoming a blur and making it a little difficult to differentiate them from one another.  The vocals, albeit robust, fall short in contrast with the music. Now, I am aware that the vocals are not often the primary focus when it comes to the subgenre, but it would be interesting to take this into consideration for future releases. Luckily, these shortcomings are not much of a nuisance and they are minimal in comparison to what the band have brought to the table for this record.

Collateral Dimension is a mastery of balance and overall a well-executed debut record. The element of storytelling is something that a subgenre like technical death metal has been lacking throughout the years, and Coexistence achieve in not only enacting it, but also maintaining the chaotic tendencies said subgenre is typically known for. Even though this record can be seen as a dot amidst the grandeur of the celestial seas of metal, there is no doubt of the potential to grow into something much greater; it is only a matter of time. If you are into technical/prog metal, give it a listen, and definitely keep an eye on them and what they’ve yet to offer.