By JP PallaisSeptember 5, 2020 No Comments

Atramentus‘ brilliant debut provides a perfect gateway record into funeral doom that is as accessible as it is ambitious and rich with many musical ideas.

Nowadays, debut records are dropping left and right from artists who came out of nowhere. Given the huge advancement in recording technology, it makes it that much easier for up and coming artists to deliver high quality debuts; cue Atramentus. Although Atramentus is a side-project of sorts from several esteemed musicians in the world of extreme metal, Stygian is a true work of art that will leave you completely awestruck. You would think that this band has been around the block several times given the quality of the music, but no, they just got here.

First, lets address the elephant in the room; the album artwork. From the moment I laid eyes on it, I knew it was the work of Mariusz Lewandowski. Recognizing his work and its connection to this record was all I needed to get me to listen to Stygian. Lewandowski always delivers the best pieces for the best records, as every record that features his art is bound to be stellar (i.e records by Psycroptic, Mizmor, Fuming Mouth, Abigail Williams, Bell Witch). Without fault, his artwork perfectly encapsulates the incredibly bleak and hopeless atmosphere that is portrayed in the music. It reminds me somewhat of H.P. Lovecraft’s cosmic horror. Similar to Lovecraft’s work, Lewandowski’s pieces remind me that we are all insignificant, that nothing in our lives truly matter in the grand scheme of things. Just that realization alone is incredibly horrifying and equally breathtaking because it is true in some respect. 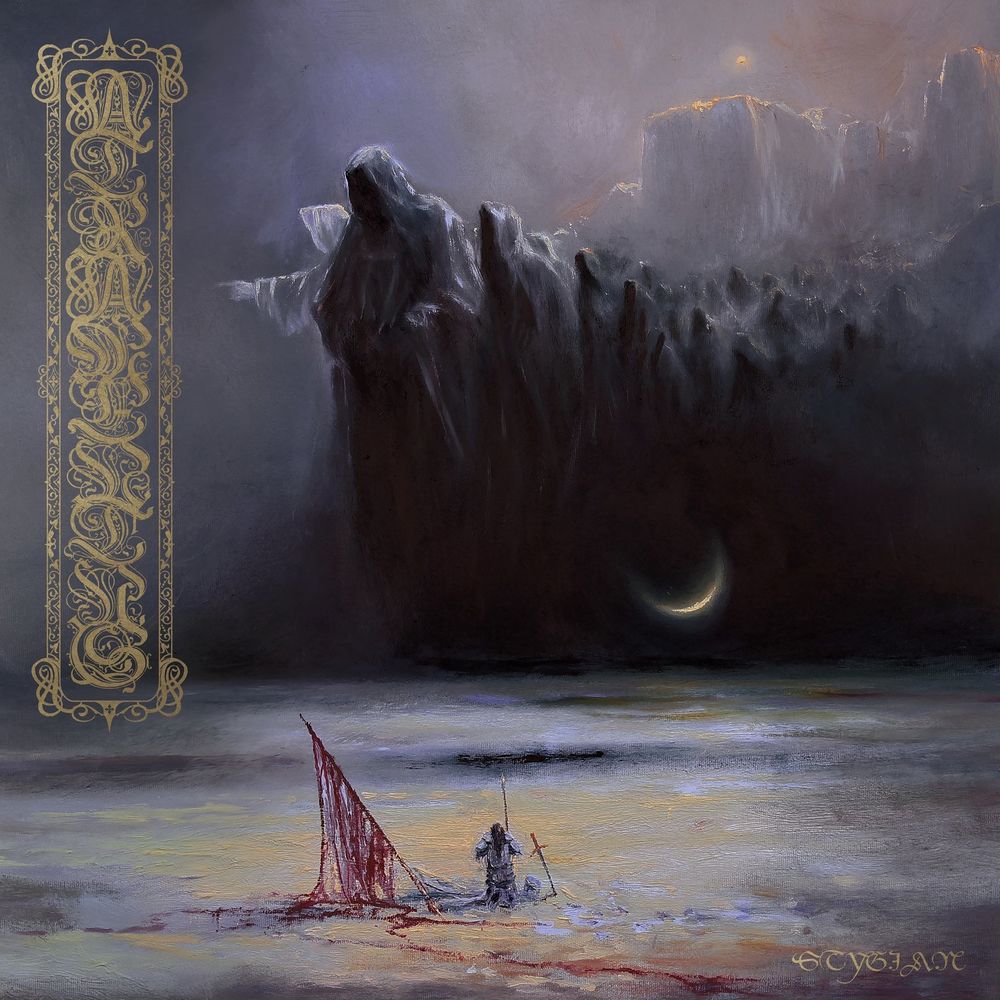 Despite Stygian being the debut record for Atramentus, this group is a side project of Phil Tougas, who is the guitarist for First Fragment. It is interesting comparing Atramentus and First Fragment as they are on polarizing ends of the extreme metal spectrum. Given how fundamentally different these two groups are from one another, it is incredibly refreshing to see artists dabble in something entirely different than what they’re known for. In this case, it is for the best, especially while we wait for new First Fragment. Needless to say, both groups are at the top of their respective genres as Stygian just shot Atramentus to the top of the funeral doom food chain alongside Bell Witch.

The weird thing about this record is that I have been constantly drawn to listen to it several times per day, which is never the case with funeral doom records. One playthrough of this type of record is enough for a few months, but Stygian just has something about it that keeps me coming back for more. As the inspiration for the closing track on Stygian being Tougas’ three-hour trek through a snowstorm at -20°C, this record truly does capture the essence of being lost in a frozen wasteland. The haunting and utterly gloomy soundscapes found throughout Stygian allow me to freeze to death in these tundra hellscapes vicariously.

Although a funeral doom record as a whole, Stygian is very well balanced between the dark ambient soundscapes and the blistering riffs and blood-curdling screams. When the music isn’t spacing out with the reverberating, droning bass, the icy black metal riffs and the melancholic, thunderous piano on top of the tumultuous vocals make for a breathtaking amalgam that is well paced throughout its entirety. The whole record slowly builds to the massive climax that is the final moment in the closing track. Once the closing track, “Stygian III”, reaches its powerfully majestic end, I am left completely bewildered each time I listen through. This sole payoff moment makes the extra effort and patience put into listening to this brilliant record beyond worth it.

Funeral doom is without a doubt a hit-or-miss genre in which you get out what you put in, so patience is key. Many dense records already take additional effort to listen through all the way and enjoy, but this specific subgenre requires even more effort. Stygian is one special record with such an enthralling allure that kept me glued to it until its end. That is very rare for a record in the world of funeral doom, especially considering that it is a debut. One could say that this record is very accessible into the genre, yet still very dense. Atramentus‘ debut was much easier to enjoy as a whole compared to its counterparts, and I will keep coming back to this particular record because it is that remarkable.

AtramentusFuneral Doom MetalQuebecStygianStygian I: From Tumultuous Heavens… (Descended Forth the Ceaseless Darkness)