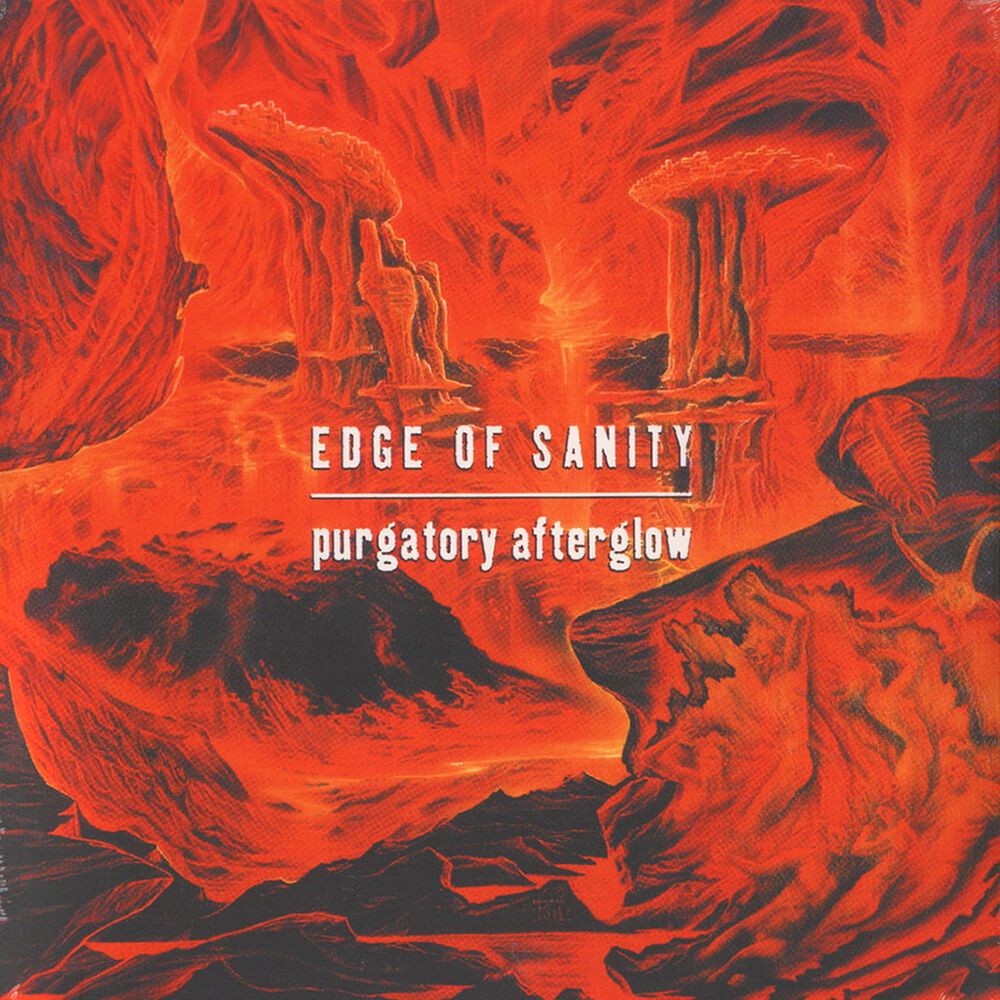 A SCENE IN RETROSPECT: Edge of Sanity – “Purgatory Afterglow”

By Dominik BöhmerOctober 8, 2022 No Comments

Purgatory Afterglow by Edge of Sanity isn’t one of those records that are frequently namedropped in discussions about the all-time greats of metal. Despite Dan Swanö’s reputation as a musician and producer, his music always existed at the outer fringes of greatness – acknowledged, at times celebrated, but never universally acclaimed. In the realms of progressive and melodic death metal, though, you’d be hard pressed to find a band (and album) more worthy of praise, which is why EIN staff writer Jake has taken it upon itself to extol their virtues.

I have found myself the sole contributor to this ASIR, and while that only slightly surprises me, I am undeterred in taking pen in hand to extol the wonders that this album holds. While Edge of Sanity is hardly a name that is unknown to many, especially those who follow metal, it’s also sadly not a name that finds itself on the lips of those who are recalling the unmissable, salient bands. If Edge of Sanity does come up, it is almost (and understandably) Crimson which is the record that most associate with this now-defunct Swedish powerhouse. The aforementioned record is revered as a progressive death metal masterpiece, and while that’s true, their other output is overshadowed by it a majority of the time. So, thankfully I get to dig in a little bit and discuss why Purgatory Afterglow should be on the lips and in the ears of anyone that calls themselves a fan of death metal.

Slicing up a record like this can be done in a variety of ways, but I think the way to best approach an album that covers so much ground and envelops a genre with such panache is to simply examine each stone in the foundation. Given that Dan Swanö was the major player for EoS, both behind the mic and the mixing board, he’s a logical place to start. His signature harsh vocal leads the album most of the time, contrasted against the melodic riffs that keep these songs impeccably catchy. The opener, “Twilight”, is honestly one of the best death metal songs of 1994 (and perhaps of all time). It spans nearly eight minutes, and while there are progressive shifts here and there that change the timbre of the song, each shift is loaded with new hooks, melodies, and riffs. The absence of fear, specifically the fear of catchiness of this song and its cousin on the album, “Black Tears”, makes me love it even more. There is, at times, a fear of accessibility within the metal community, and while I think I understand the psychology of it at least in broad strokes, fuck it. That’s why all these years later hearing the riffs from “Twilight” and “Black Tears” makes me smile in a way that only a bouncy melodic riff can.

On the flip side, there are tracks that will go for the throat and the throat only. “Of Darksome Origin” and “Silent” are songs that act as rabid sharks looking for something to chew on. The latter specifically feels like straight-up Entombed-style rip-and-tear death metal that builds atmosphere through the removal of oxygen. The ability to go this hard is what gives EoS their sense of weight and authenticity. You can’t win over a metalhead by throwing them a cool melody and some nice riffs, you have to prove that you can bring it. “Silent” is a deal-sealing bringer. It is brought. It’s broughten. Whatever. This song fucks. I adore this track, obviously, and I love it for entirely different reasons and criteria that would apply to many of the other songs present on Purgatory Afterglow. That in and of itself is a bit of a rarity for me, and I think it’s rare in general. There are so many textures to admire and each one seems more lovely than the last.

What makes bands tick, especially in death metal, where each song lives and dies by the rhythm section, is the bassist and drummer. Yes, guitarists get all the glory most of the time, but without these two mainstays, you might as well bin those riffs because we ain’t buying them. Bassist Anders Lindberg and drummer Benny Larsson repeatedly hold it down on Purgatory Afterglow by keeping it simple when it best serves the song and by ratcheting up the complexity when the song needs an extra dash of that special sauce. There are a variety of rhythms and ideas on this record that range from the aforementioned melodic bounce to the stretched-out doom-adjacent tracks that get downright sludgey at times, such as “Velvet Dreams”. Regardless of where the song goes, each bass line and drum fill feel not only appropriate but that they were also inevitable.

If you’re writing an album of progressive music – and greater to the point, heavy progressive music – you have to keep things interesting, otherwise listeners can jettison your album pretty quickly. Thankfully, Edge of Sanity knew that back in 1994. In their own way, they became masters of writing an album that navigated their intended sound and genre without dallying too long in one pocket but sticking around long enough to get their point across. Without this variety being on display, albums like this could get samey and monotonous, but boy does Purgatory Afterglow sidestep that trap with ease. The song lengths are varied and the alternating moods are interspersed throughout the album’s 44 minutes; as I have said many times, that is what makes a good album great. What is interesting is that the band initially planned this LP as two EPs, with one focusing on their more straightforward death metal leanings and the other delving into their experimental musings. Funny how things work out, isn’t it?

Purgatory Afterglow is a record that is endlessly listenable because of the throughlines that are present throughout. Yes, there are many, many styles present on the album, but the fact Edge of Sanity can make all these disparate ideas – that were planned as separate releases for fuck’s sake – seem like they are all spokes from the same hub is what makes this such a memorable record. Its legacy while maybe not quite as lauded as some of its counterparts, is and will continue to be a masterclass in the intersection of catchy and disgustingly heavy. With talent all over the place – on both sides of the mic – this is a record that deserves to be revisited by fans and newcomers alike. The riffs and vocal hooks will linger in your head for days. The production and pacing are second to none. Simply put, this is an album that you need to have in your lexicon because so much music that came after it borrowed heavily from it – from progressive to melodic death metal.