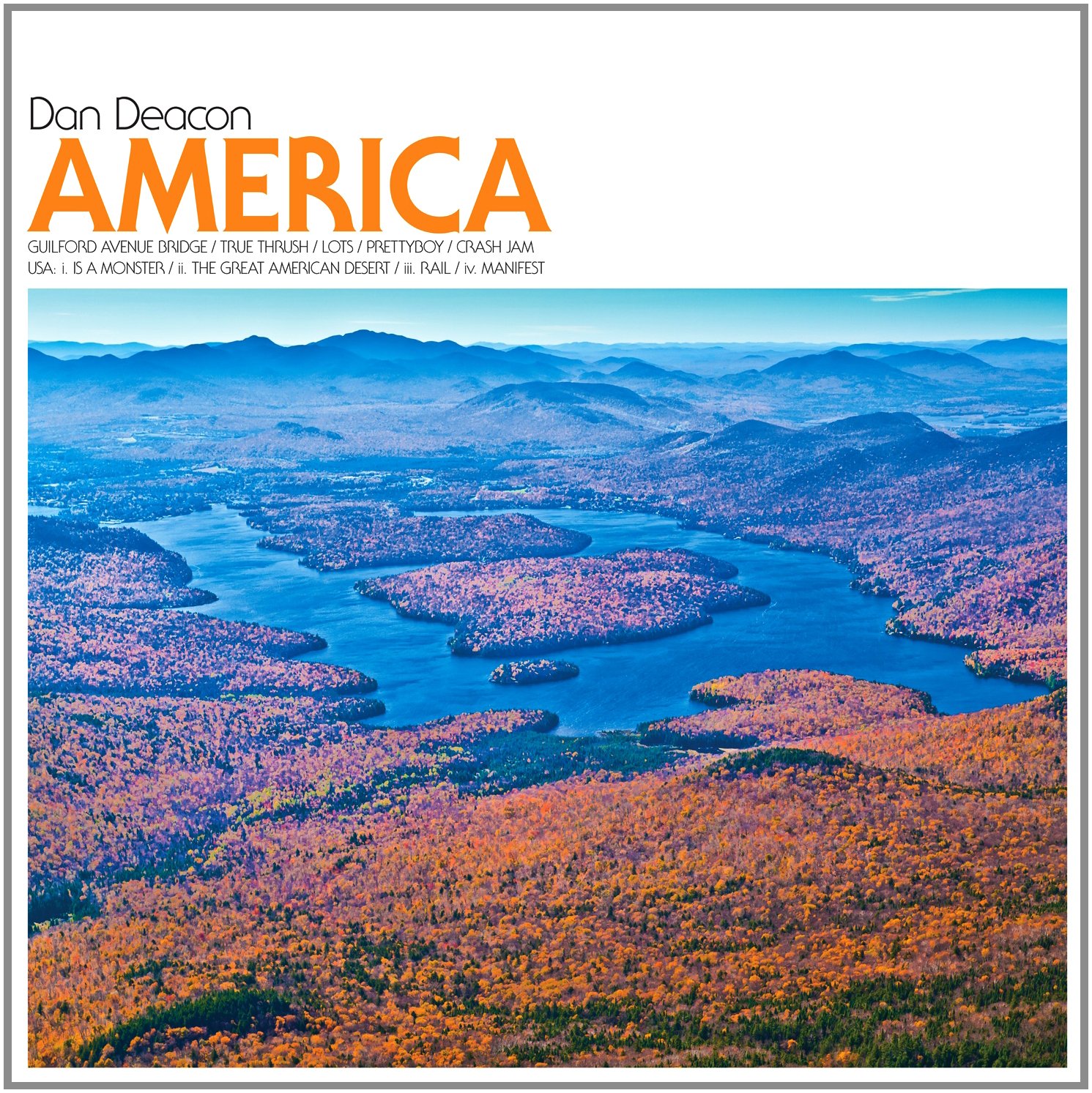 By Dominik BöhmerAugust 27, 2022 No Comments

Regardless of genre, there are a lot of bands and artists out there who fall into the category of ‘too much going on at all times’. While most of them seem to construct their music like that in a desperate bid to appear as wacky, genre-bending powerhouses and ultimately fail at having their music be charming or listenable (not naming any names), Dan Deacon always seems to be in it only for the sheer joy of it. His music never feels stilted or over-rendered; instead, you can almost grasp the childlike glee and wonder it emanates, even with how sophisticated it can get at times. His third album America, released in 2012, is no different in that regard.

Dan Deacon is nothing short of a legit phenomenon as I see it. Within the world of electronic music, there are few (if any at all) that come close in terms of vision and breadth of said vision. In terms of sound design, though, I can’t say he’d easily sit at the top of said food chain, but he’s definitely among the finer representatives. While there’s a lot to talk about in terms of what Dan Deacon represents as a musician and an artist, we just don’t have time to take all of that apart, so I’ll leave it at the fact that he’s criminally underrated.

America, as the title implies, is a record of massive proportions, no matter how you look at or cut it. I think massive is underselling it, but we’ll stick to that so it doesn’t feel like I’m hyper hyping right off the bat. It’s difficult to absorb all that the record has to offer in one listen, especially given the amplitude and depth at which all the layers unfurl. I mean, you only have to look at the fact that there are 24 musicians (Deacon included) performing on the record, and that gives you the perfect starting bite to understand the scale. We’re talking instrumentation that’s basically fully orchestral with other things to spare, too.

It took me a long time to really take it in properly, but the appreciation and love was highly present from the first second. I really can’t remember how I came across America, which irks me somewhat, as I really like to start with my very first moments with a discovery I really enjoy when I’m going about presenting a record. Anyway, at some point in time I came across it, and I was slack-jawed for a long time. As it goes with records that take a long time to digest, their reward is proportional with the investment, although in this case it feels like a case of a gift that keeps on giving. Replaying the record again God knows how many times on repeat for the purposes of this write-up was a blast.

Deacon mentions that he wanted to incorporate live instruments into the record because he was aiming to add the organic feel of that kind of delivery as provided by the instruments, giving the ‘slight imperfection in timing’ characteristic to this. He also aimed for the record to have a more rock-oriented sound rather than an electronic one, thus he enlisted Simon Heyworth (King Crimson) to master it. I think that in this same breath it’s worth underlining a part of what Deacon himself calls into question as inspiration for the album:

‘The inspiration for the music was my love of cross-country travel, seeing the landscapes of the United States, going from east to west and back again over the course of seasons. The lyrics are inspired by my frustration, fear and anger towards the country and world I live in and am a part of. As I came closer to finishing the album these themes began to show themselves more frequently and greater clarity. There seemed no better world to encapsulate both inspirations than the simple beauty found in the word America.‘

I really feel like this short statement rings with quite a resonance when listening to the music, even though I’ve never as much as been to the USA, let alone been influenced by its context directly. There’s something incredibly evocative about the music, as well as poignantly immersive, which really allows the listener to reach into a world that’s ultimately far from them, even if ubiquitous in so many forms of media.

Let’s get right down to it, though. The record starts off with “Guilford Avenue Bridge”, which, while not the most standout of moments, is a very energetic and apt way to kick things off and absolutely sets the mood for what we’re going to have our ears subjected to. The part electronic, part live instrumentation set-up is also immediately visible right from the start, offering a hybrid sound that retains the best of both worlds. The energetic demeanor of our opener is cut with some contemplative moments too, creating a diverse emotional landscape, which is something that will be something of a recurring motif throughout. Following up, “True Thrush” adds some avant-pop flavors into the mix, coming into a bit of a catchier kind of rhythmic feel, albeit retaining the characteristic weirdness of what Deacon is all about.

There’s just an inescapable vibe of experimentation and forward thinking which tends to fall into something that’s often labeled as weird or, more generously at other times, as leftfield. I think it’s the characteristic charm of Deacon, and I never want to hear the end of it. “Lots” pretty much just continues the set feel and drives it forward, whereas “Prettyboy” takes the wheel and drives off into what is, for all intents and purposes, an electronically driven modern classical/post-rock pocket symphony. It’s gorgeous, and I’m all there for it and its lush textures, which take us into a colorful realm drenched in ethereal bliss. “Crash Jam” just tears the wheel back and ups the ante with the glitchy elements taking us to the core of the action, the thing we’ve all been waiting for, the hottest part of the show.

Enter the USA suite. This is where it’s all at. This is some of the most fucking glorious music out there. The USA suite, is, to me at least, one of the greatest pieces of music ever made. It has an oddball kind of timeless classical feeling to it, which I can’t shake of – even if I wanted to. The USA suite is made up of four songs: “I. Is A Monster”, “II. The Great American Desert”, “III. Rail”, and finally, but not least, “IV. Manifest”.

Now, before anything, I cannot stress enough how essential I feel is the visual accompaniment to this suite (note that you need a Vimeo account to see it – but it’s 150% worth it). Adult Swim created this as a one-off video in their Off The Air series, with the help of several visual designers. As it all begins, “I. Is A Monster” opens up with an orchestral tune, somewhat subdued and somber, yet grand, bright, and ample. The beautiful landscapes and sunrises flushing each other on and off screen make for a perfect pairing for this introductory moment. We are then brought to the midst of it with arpeggiated synths, echoing grooves, and cacophonically layered vocal tracks running amuck as we witness deer and wolves running through the forest in a highly psychedelic, datamoshed setting. You might want to avoid this if you are sensitive to a metric fuckton of bright, contrasting colors going haywire in front of you.

As the opening segment fades out and transitions into “II. The Great American Desert”, we’re going deeper into the glitchy/IDM-tinted side, with a fitting datamoshed sequence of night-time cities and urban scapes melting and twisting through each other in what appears like a digital nightmare turned to prophetic vision. This expanse all culminates eventually into a thunderous epic, with angelic vocals overdubbed to feel like choirs, overlapping tons of electronic artefacts sizzling about, filling the space in between. The visual on top is NASA footage above the earth, with long exposure shots stacked and staggered, with a laminar flow to create this smudge of trailing light, which is a perfect fit with the ensuing sounds. It’s ultimately a transdisciplinary synergy that could never be appropriately portrayed otherwise. It’s by far my favorite moment on all levels in this record. It is of course met with some weirdness on all ends as the segment comes to a close, with something I can’t be bothered trying to describe – just listen, watch, and try not to have your brain destroyed.

Fading out of here and slowly going into “III. Rail”, we reach a much more percussive side of the suite, which holds to its charge a simple yet effective tune. The visuals are similarly linear and easy to follow, giving us something easy to go with for this segment of the journey. It’s all in the name, really, and it ties into Deacon’s aforementioned penchant for cross-country travels. It’s all about the trains here. It’s something that’s surprisingly elegant in its simplicity and is oddly soothing and refreshing compared to what we got so far. Exiting the maddening digital glitch sphere and taking a turn for some orchestral elements, we get some more natural landscapes superimposed with a bunch of activities and psychedelic visuals. It all binds together as the perfect breather after the rollercoaster we went through. The ending of this goes back to the opening, with that subtle yet grandiose character.

Finally, “IV. Manifest”, goes back to the very motif we got during the latter half of the first part “I. Is A Monster”, both sonically and visually. It’s a perfect ending to a perfect suite, emphasizing the circular nature of things.

So, yeah, that’s my two cents on Dan Deacon’s America. What do you think?