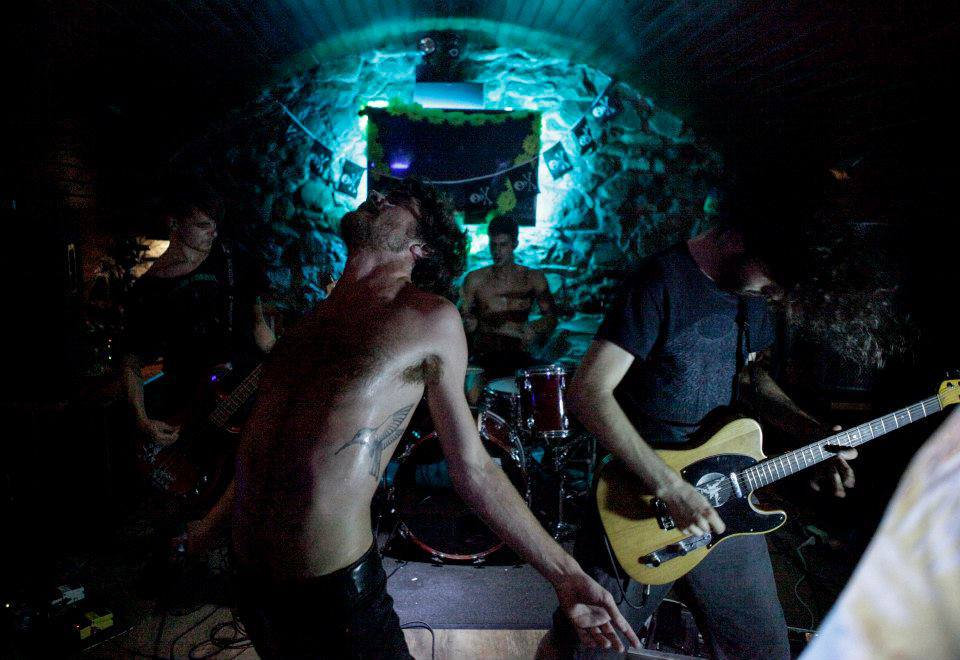 By Rodney FuchsNovember 10, 2019 No Comments

Darkness and storminess reign the sound of Finis Terrae, which will rouse you within no time. Once again, Storm{O} proof their skill in doing chaotic, hardcore-driven mathcore, wrapped in a doomy, blackened robe.

Imagine there’s a sudden storm coming up – everything is caught by the wind, things are levitating uncontrollably, and chaos reigns. This scenario is exactly what Finis Terrae sounds like. Out of nowhere, the instrumental of “Trema” starts in a very unconventional way. It’s hard to see clear through the mist of Storm{O}’s darkness and depression. Then, just as unexpected as the instrumental before them, the vocals come in. “Trema” doesn’t show any discernable structure and feels impetuous with its unorthodox blackened mathcore riffing. At times, a strange sense of order becomes palpable among the chaotic clouds of “Trema”, but overall, it opens the album in an uncompromising and direct way.

“Tempi Morti” delivers an obvious hardcore undertone and is much easier to follow than Finis Terrae‘s opening song, while also featuring this chaotic component that is so important and formative for the sound of Storm{O}. One of these stylistic components is the upbeat drum beats, classic blast beats and their interrupton by well-placed breaks and fills. The drumming is always straightforward, delivering most of the energy with an organic and aggressive snare drum sound, as well as hard-hitting cymbals. The squeaking guitars form a very raw and driven sound befitting the music on Finis Terrae.

There is a natural and organic drive to all songs on Finis Terrae, which leads to the fact that there seem to be no pauses in between the single tracks. The album rushes through its runtime led by a common thread and vocals that are neither sung nor shouted, but rather just aggressively spoken. The main riff of “Ho Chi Minh” almost feels catchy; it delivers a surf rock vibe, combined with a post-punk attitude that is almost danceable in a way that is not conducive to violent dancing or moshing. The following song, “Vetro”, features very narrative and belligerently enunciated vocals, apart from a lot of dissonant and atonal guitar riffing.

One song that’s really worth speaking about is “Progresso”. Starting with a Herod-ish doom riff, it builds up on repeating the rhythm, similar to what Meshuggah do in many of their songs. The chain of rhythms Storm {O} create here goes on and on, resulting in an easily followable structure that is very welcome in between all the chaotic and seemingly arbitrarily structured songs. The song’s title (Italian for ‘progress’) might be a direct reference, due to the fact that it really progresses in its playtime and creates a convincing momentum within its brieg 152 seconds of runtime. In fact, most songs on Finis Terrae barely scratch the two-and-a-half minute mark. Only “Niente” – the longest song by a long shot – reaches a comparatively epic playtime of 5:40. “Niente” once more displays the doomy tendencies of Storm{O}. Instead of being filled with vocals, it stays instrumental for quite a while, and is thus able to really focus on the sludgy and gritty riffing.

After 2018’s release of Ere, Storm{O} are back and prove once more that Italy has a vivid and exciting mathcore scene. Despite the questionable status of Amia Venera Landscape and the disbanding of Fall Of Minerva, there’s still acts like Storm{O} or Noise Trail Immersion who deliver quality music in between chaos and aggression.

At times, Storm{O} sound like a mathcore version of Birds In Row; in other moments, they sound like Converge excercising doom metal or The Chariot on a hardcore bender. Anyway, Finis Terrae is a record full of energy, disturbing power, and an inexhaustible drive. The songs on this record won’t give you a break, and neither will they give you a moment to rest. The phonetics of the Italian language make them even more hectic, and sound extremely critical and serious within the band’s musical background. Finis Terrae’s short playtime of 27 minutes delivers blackened chaotic hardcore at its best: dark, heavy, gritty, and melancholic.