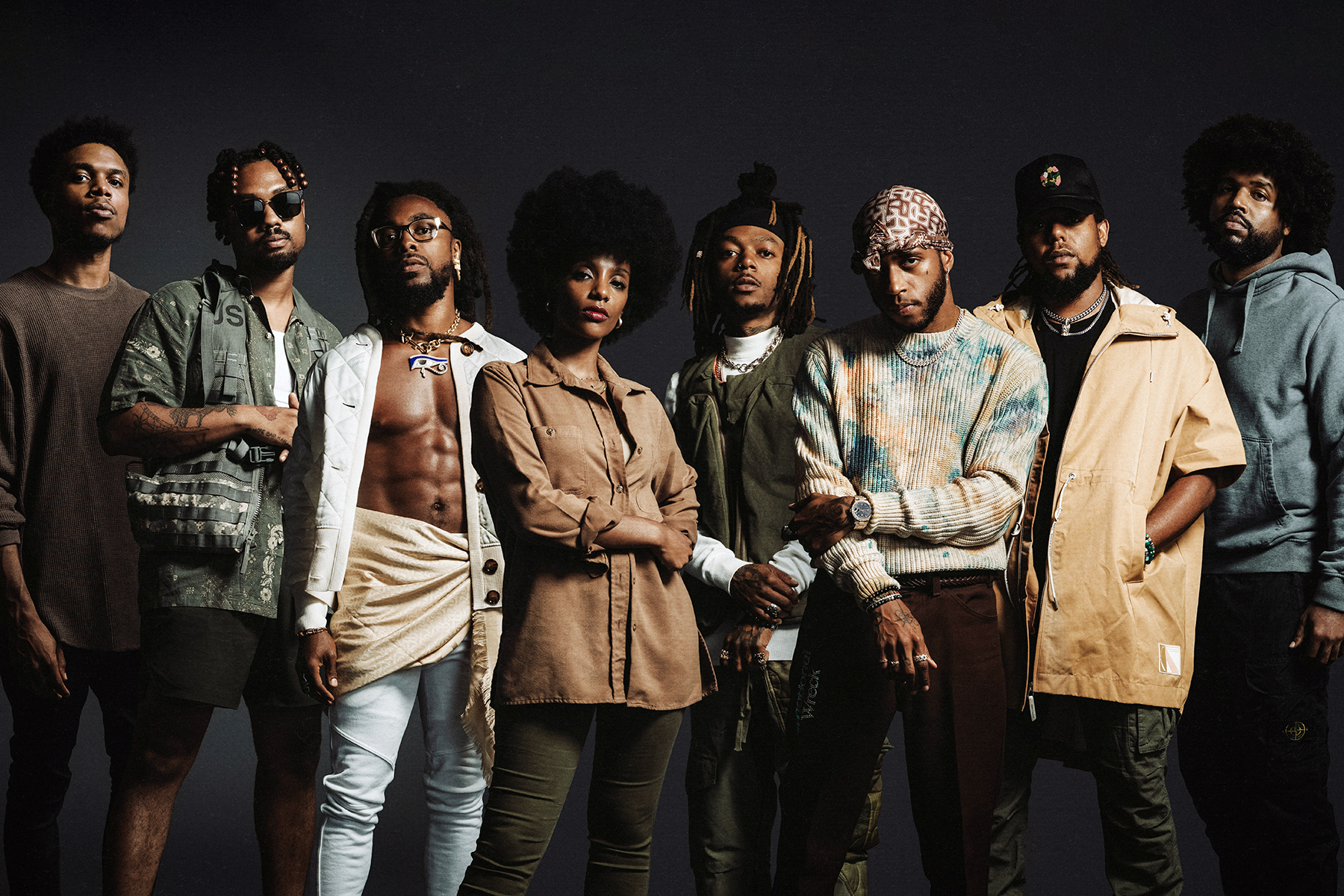 By David RodriguezOctober 11, 2020 No Comments

Excuse me, sir, do you have a moment to speak about music’s saviors, Spillage Village? Spilligion is a clinic on having hope when there is none to find, and sounding divine while doing it.

I know the album is called Spilligion, a wonderful amalgamation of ‘Spillage’ and ‘religion,’ but I’m not going to preach in this review. Neither are the members of Spillage Village for that matter. Still, it’s worth saying that – given a number of current events and ongoing, ceaseless systems and institutions that aren’t doing us any favors, some way less than others – we’re at a crossroads. I’m writing this on the night of the first presidential debate in the United States, an event that, if going off of what my friends said, was absolutely abysmal, worthless, and not exactly encouraging of a prosperous future. In other words, we’re fucked. It’s one of those nights that an album like this is a warm refuge for the downtrodden and desperate.

Spillage Village is a wonderful Atlanta-based collective started by EARTHGANG, a freaky ATLien-descendant hip-hop duo consisting of Doctur Dot (AKA WowGr8) and Johnny Venus (AKA Olu), a man I’m certain is contractually obligated to never wear a shirt ever again in public. They’re probably my favorite hip-hop duo outside of Run The Jewels. They additionally consist of JID, Mereba, 6LACK, Hollywood JB, Benji., and Jurdan Bryant (formerly JordxnBryant); all artists with their own lane so to speak, but still come together magnificently and rose to prominence with a trilogy of mixtapes I’ve only begun to explore myself. For the last couple decades, it seems as if endless talent has been flooding from Atlanta and it’s with that in mind that I say Spilligion not only has its own agenda, but also functions as a modern greatest hits compilation from the city with the artistry on display.

Like any good religious journey, it begins with a baptism, and the one on here makes for one of the hardest songs I’ve heard all year. “Baptize” is a masterclass in teeing up a theme, fun and clever quotables, superior flow, and rewind-worthy wordplay. Johnny Venus, JID, and Doctur Dot are voraciously hungry, seemingly working their hardest to outdo who came before them over charmingly sparse, bass-centric production. As the lyrical water runs over your head, you’re asked to confront cold realities from fake people to police brutality, delivered on the backs of hefty religious references. JID comes through with the best wordplay (‘Sacrificial Lamborghini, do the dash up on the road‘), Venus makes the objective clear (‘Catch me out in Europe with my black skin/Fightin’ for freedom, my ni**a, ain’t no more askin’‘), while Dot seems to check all the boxes while creating his own and displaying his playful personality, all within half a verse:

‘Fresh out the fire, Abednego, officer pull you over
Killin’ a ni**a in cold blood, get him a Christmas bonus
Wasn’t until it went digital that you finally start takin’ notice
Now you wanna be delivered, huh?
Guess who pullin’ up to dinner, huh?
Got me center court like a Tyson punch for a million bucks
Is it worth what you really givin’ up?
Got my heart broke by a Taurus
Went and found a Gemini with a bigger butt
And only God can judge, and that’s only if He still give a fuck‘

The next big standout track is easily “Mecca” for being a melodic monolith with some impressive, soulful singing from Venus in a bid to unite the world while paying some neat homage to Africa in particular. If you read the title of the track as a more general reference to a focal point of a people or community as opposed to the Islamic holy city in Saudi Arabia, the theme explains itself – though, given the overtones of religion throughout this whole album, the latter interpretation also works. Its refrain of ‘spread the love all ’round the world‘ sung by someone much younger than any of the marquee artists is endearing and sanguine. Couple this with its slow funk instrumentation and vocal harmonies elsewhere on the hook and it’s a jam.

One track earlier on “Ea’alah (Family)” sees JID on the hook praying for money, peace, and love. A heartfelt verse from Hollywood JB reflects on time spent with those that stand with you and building a legacy with your kids behind some lush vocal harmonies and guitar. It’s the first truly hopeful moment of the album, introspective and wishful in its thinking. Johnny Venus even has a quick phone call with God to vent about coronavirus and wish for the power to bring about change and the same love and peace his colleague did. Hope he had a good long-distance package on his phone plan.

“Hapi” is where the whole album seems to coalesce. Though it’s not the final track of the album, it offers a conclusory take on the themes explored in an immensely poetic and divine way. Right off the bat, the chorus with Venus and Mereba hits hard by playing with the concept of rhythm:

The man in the woods represents a freedom or peace caused by the breaking of a rhythm; a bucking of the status quo. The gunshots represent a threat or disturbing dissonance caused by that loss of rhythm (though not necessarily the same rhythm as before). Both are integral to the themes of the album as it lobbies for knowledgeable togetherness and community as well as a confrontation of things that should change in order to facilitate that unity. Really though, it embodies a sermon that builds a heaven brick by brick; a place where ‘a child’s wish can always come true, and the old and withered become renewed.’ Most importantly, it’s a very optimistic view of freedom and how to achieve it. When coupled with the video for it – showing a picturesque river baptism of a newborn, young Black children playing without a worry in their hearts – its beauty is absolutely soul-stirring easily bringing tears out of me with its desire for that freedom to life unbounded by corruption of all kinds. It visualizes a world that answers Master P‘s “Is There A Heaven For A Gangsta?” with a resounding yes, closing with spoken word from Atlanta legend and Dungeon Family alum Big Rube worthy of the most well-read and charismatic preacher.

I could write about this album all damn day. Hell, I practically did. We’re 1000 words deep and I still have to wrap this whole thing up. I regret not being able to cover more, like how Chance The Rapper came through and delivered a great verse arguably for the first time in years on “Judas”, or how “Oshun” muses on love as a representation of heaven on earth. Spilligion is incredibly dense and worth a dedicated study, yet never sacrifices each member’s unique swagger or sees any of the artists involved bend too far to conform to its themes. It’s a natural album, one that flows with great ease and is fitting for a philosophical smoke session with close friends or a weekend drive to decompress all on your own. Just like religion or God, it’s whatever you want it to be, but hopefully whatever it is will be good and gentle to you, bestowing on you a wealth of knowledge and clarity that you can’t find elsewhere.

Members of Spillage Village have enjoyed success on their own, but like the tenets of community and unity Spilligion espouses, they’re even better as a group. I have no doubt we’ll be seeing more of the group (individually and collectively) in the future. They have so much to offer, representing everything from the flaws and sins of humanity, to the elevated spirituality that so many strive to achieve, and everything else in between. It’s what I needed, tonight especially. It’s what I’ll go to when I need a shot of optimism behind the ear. It’s… really damn good, y’all. Press play and become a convert.