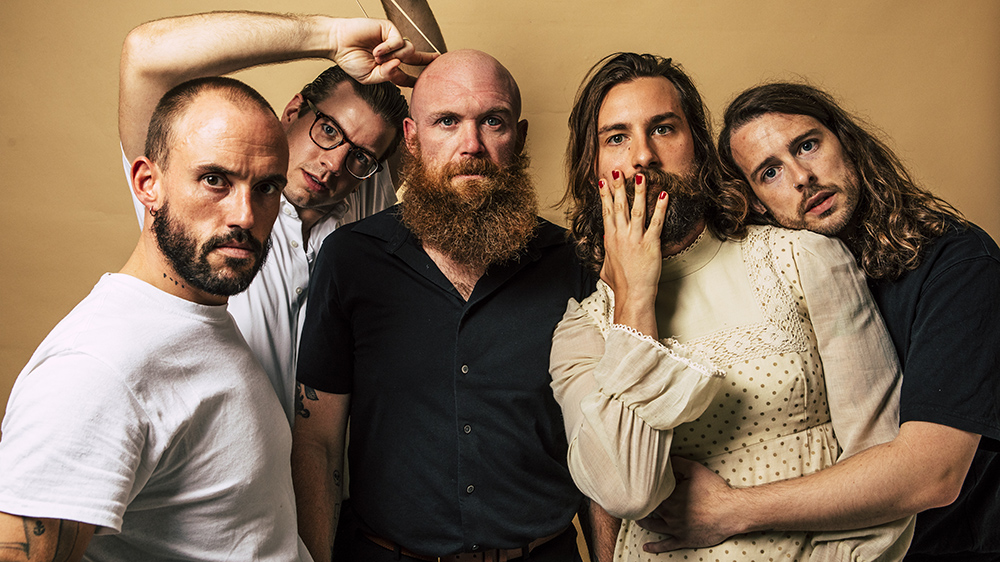 By Alex SieversDecember 24, 2021 No Comments

Crawler sees vocalist Joe Talbot picking himself up with his most honest story-telling yet, on what is IDLES‘ most eclectic record yet.

IDLES will likely never top their first two records. The politically aware post-hardcore that detailed Brutalism (2017) and Joy As An Act Of Resistance (2018, their best album) are two towering punk peaks crafted by the English-Irish group. Going into Crawler, it’s like the quintet themselves know this about their discography, thinking why bother writing another facsimile of their finest releases in light of more creative growth. Thus births Crawler, their most expansive and introspective body of work yet, taking the inward view of Ultra Mono (2020) one step further.

Leaving socio-political topics mostly in the dust and picking up a deeply personal lyrical mantle for Crawler’s majority, frontman Joe Talbot uses this fourth IDLES LP to detail past issues with substance abuse and a drug-fuelled car crash that nearly killed him, an incident that sparked a huge turnaround in his life and habits (no prizes for guessing what “Car Crash” is about). All of this is made blatantly obvious by the opening husky vocal lines that sit over eerie synth and guitar loops in the fantastic, tension-heavy opener “MTT 420 RR”: ‘It was February, I was cold and I was high.‘ This is Talbot reflectively crooning about what led to said accident – his drug habits – later singing, through ever-rising dynamics, to his old self and us listeners about what’s to come for him and this new album: ‘Are you ready for the storm?‘ A storm of honesty is indeed what follows, but also one of rocking IDLES charm and some welcomed wider experimentation.

While creative force and guitarist Mark Bowen may have produced this record alongside Kenny Beats (no, that’s not a typo), Crawler really is Talbot’s album when you take stock of it. He and the band have written autobiographical songs before that dealt with past personal matters before. Like the heartbreak of stillbirth in “June,” or one of their biggest songs, “Never Fight A Man With A Perm,” a critique of toxic masculinity but also about Talbot’s fighting behaviour as a younger man, something he looks back upon with shame. Here, it’s almost exclusively about the self, perceived in a crystal-clear mirror placed under the world’s biggest spotlight for 14 tracks.

IDLES are not subtle, and Crawler doesn’t upheave that paradigm for the band’s overall dynamic, but its sprawling nature does allow the straightforward call-it-how-you-see-it lyricism to hit harder in places. For instance, have a look at the stirring ’60s prom night-esque single, “The Beachland Ballroom”, one of the album’s quieter but finer moments. Named after the iconic Ohio venue, this soulful slow-jam gets delivered with a minimal intimacy and restraint that we don’t see much from IDLES, but it’s a shift that only elevates the band’s craft. Making the songs evocative finale all the more impactful, what with Talbot’s pained vocals of ‘DAMAGED!‘ repeated heavily.

This isn’t to say the band don’t have rockin’ playful moments on Crawler – they most certainly do. For instance, following a grimy guitar solo on the fun-as-hell ode to imposter syndrome “Meds,” Talbot literally states ‘real nice, Bo, real nice‘ to Bowen in the cheeky way that only IDLES can do without it feeling too tacky. Via shuffling tom-snare drum beats of “The Wheel,” we hear typical IDLES rhythmic urgency and the first thing you learn in punk #101. Yet the song’s fuzzy low-end and slow, heavy chords pack a real wallop as Talbot begs ‘Can I get a hallelujah?’ as he addresses the cyclic issues of dependency on alcoholism from mother to son. Then there’s the upbeat, hip-shaking “The New Sensation”, one of the rare songs not written about Talbot, instead, taking ire with a U.K. Government Covid-19 advert that basically told those in the art world to fuck off and quit, getting retrained in ‘essential’ roles to be mindless office plebs or boot-licking government servants. The catchiness of the song almost makes you forget what a disingenuous, out-of-touch scummy bunch the Tories are. Almost.

“Stockholm Syndrome” marches along with a motorised, percussive drive that early IDLES displayed with swagger, but now in a less aggro manner, and that’s fine. The band holding the instrumental steady for Talbot to dish out a lesson in when to shut it and not cast judgement on addicts. At this point, it might sound like IDLES are still writing punk tracks but at a slower tempo, and while that’s sometimes the case, tracks like “Progress” – borderline post-rock that glitters and allows lyrics of endless self-destruction to bloom – ditch that and hit a different kind of beautiful light altogether. Likewise with “When The Lights Come On,” a murky and chilling Interpol-adjacent post-punk piece that lacks ferocity but makes up for it with a seedy, darkened mood. Then there’s the weirdest one, “Car Crash”, which aches like an old metallic house splitting at the foundation; slow-rolling percussion under lo-fi vocals with ominous guitars and electronics landing around you like mortar shells, making for one of the freakiest IDLES tunes yet. Big fan of this one, I be!

For all its wins, Crawler does have its losses. “Wizz” is this 30-second hardcore song where Talbot screams out text messages from an old drug dealer. His goal? To make the song feel like a cocaine high, and while I’ve never done white-nose candy myself, I know enough people who have, and this over-excited, heart-palpitating little song seems accurate to what said powder does to you. It’s a shame, then, that it’s a completely removable, jarring track whose frantic hardcore exterior doesn’t gel with the rest of the LP in the slightest. “Kelechi”, written about a friend of Talbot’s who tragically took their own life, is a blink-and-you’ll-miss-it instrumental that has no weight whatsoever, I’m afraid. As does the penultimate “King Snake”, which has this mindset of ‘everything will be alright, guy’, yet it’s probably the most uneventful and boring IDLES song to date. Just going through the motions, with nothing meaningful to say, which is ironic given the lyrics.

Despite these hiccups in the tracklisting, the album remains standing tall. By the time “Crawl!” begins with yet another drums-first intro from Jon Beavis, right before Bowen’s sawing riffage chews you the fuck up, the closest the band ever get to their older works, you really sink into the ebb and flow of Crawler. So when the end does come around, on the fittingly titled and rather uplifting “The End,” Talbot gushes ‘in spite of it all, life is beautiful” as he discovers a new lease on life, no matter what bullshit comes his way.

The positive, silver-lining tone of previous albums remains firm on Crawler, it’s just that this new record arrived at that same affirming destination via a different sonic route. Crawler is still IDLES in rock form, but also them throwing caution to the wind and experimenting, finding a different lens to tell their frontman’s most personal story yet. Ultimately proving you can ease off the punk pedal and still be compelling.