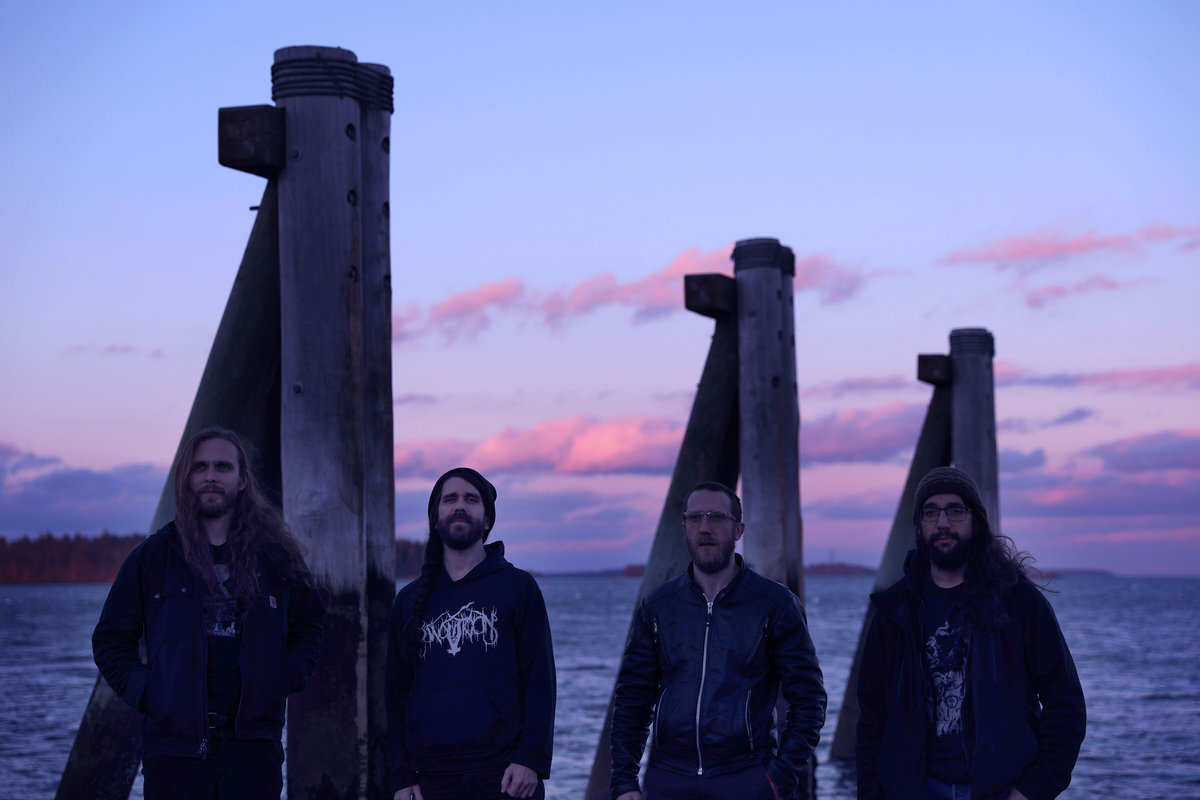 Falls of Rauros – “Patterns in Mythology”

Falls of Rauros look for the Patterns in Mythology with their new album by combining post-metal, death metal, and atmosphere subverting and maintaining old metal tropes.

Falls of Rauros have been around for some time now though this is my first introduction to them. And what an intro it is! Patterns in Mythology offers of a huge spin of the death metal style and offers up something really quite nice to listen to. The first thought I had when I was listening to this was that the often beautiful sounding music made this album even heavier somehow. But let’s not skip ahead too much.

At its core Patterns in Mythology is a death metal album but as mentioned above there are a lot of elements which elevate the record above standard death metal. There are hints of folk elements ala Panopticon, post-rock/metal moments which create huge soaring sections, and a whole of melodic moments which allow the songs to carry you onwards.

Patterns starts off with a nice calm introduction with “Detournement” but then crashes in with the over eleven minute track “Weapons of Refusal”. This songis long and it is heavy! But don’t let that scare you. There are tons of different moments which are weaved throughout which create a full story. The ups and downs within are immense and beautiful as they make full use of melody, heaviness, and post elements.

Following up is “New Inertia” which starts off much more relaxed with some acoustic guitar sections. The song increases momentum from there until it slams in with some heavy vocals mixed with heavy music. The slower pace of the song gives way to a much more standard death metal approach until it again slows down. I’m starting to repeat myself here so just know that the songs here are diverse despite my words. Falls of Rauros easily blends a variety of different styles in a sort of mix’n’match kind of way. But at the end of the day, the sounds they create are immense and filled with emotion.

A pattern (heh) that makes itself known here is that there is a heavy inspiration from the land and the sea. Found within these tracks are ebbs and flows of the water and the changing of land which can be found while traversing regions nearest the coast. Falls of Rauros uses the natural flow of nature and integrates it well into each track.

Patterns in Mythology, like the music, has its ups and downs. There are a lot of sections that feel like we’ve heard them before by other bands. The style of death metal, in my opinion, has gotten a little stale over the years and some of the tropes are over done. Luckily, Falls of Rauros seem to know this as well which is good for us because of the variety they offer within the songs and record. For those who have listened to the aforementioned Panopticon and other similar bands then you have heard a part of how these guys sound.

Falls of Rauros has shown us that the death metal scene isn’t dead yet by offering immense songs with many passages. One inspiration which can be heard is that of the landscape and the ocean. The band has included the names of pieces of art by Winslow Homer on their Bandcamp page which includes both landscapes and oceans. I will link to the images here for extra immersion of the album. The names and pieces are “Sunlight on the Coast”, “High Cliff, Coast of Maine”, and “Early Morning After a Storm at Sea”. Be sure to check out Patterns in Mythology by Falls of Rauros!