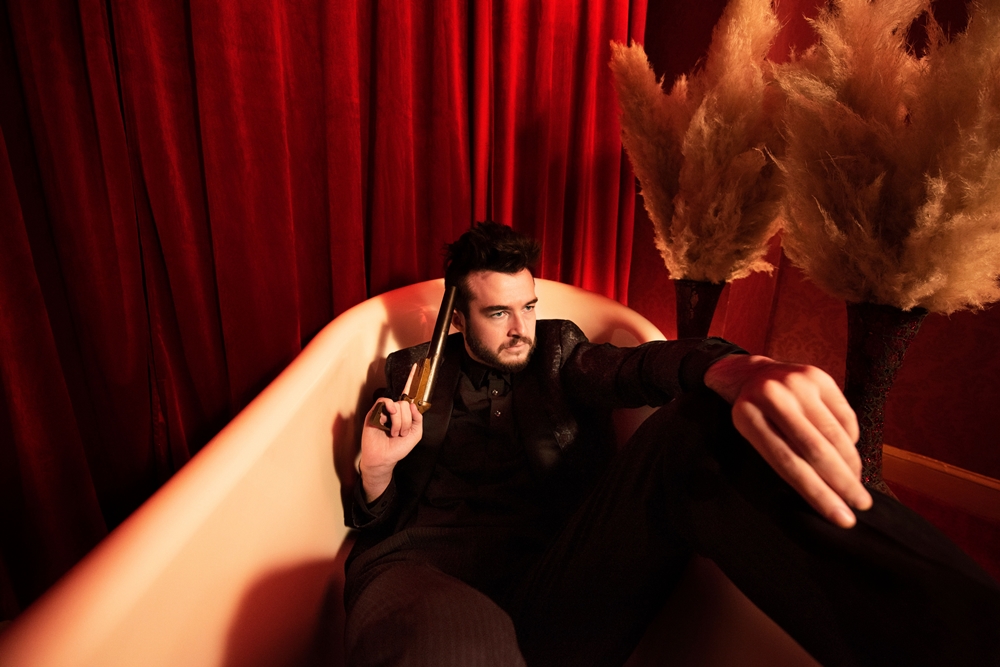 I started writing this review with excitement. 4 songs in, and I really liked what direction Dylan Neal was going with this Thief project of his. After I hit the middle tracks my side eye was growing, then after diving further in I realized this album suffers heavily from a lack of focus.

The 16 Deaths of My Master starts out strong enough. “Underking” and “Teenage Satanist” do a decent job of reflecting Dylan Neal’s quirks, and they’re interesting tracks. I like the way “Underking” utilizes that static synth slap as Dylan dives in with his apathetic murmur. The track picks up steam, playing with the synth structure it starts on, and it scratches a very specific itch I’m sure folks have. This shit plays out like a dusty Massive Attack with equal parts Placebo for good effect, then just full on dives into a ’90s techno banger – and it fucking works.

The trip hop influence bleeds over into “Bootleg Blood” as well. In fact, Neal does some of his best work when he slows things down and leans in heavily on those influences. The climax of the song leads into him apathetically proclaiming ‘fuck you‘, which will sound cool as fuck should the right folks get their hands on the remix.

“Scorpion Mother” does some really fun shit with organs towards the end of the track, and its slinky and sultry structure gives it decent allure. Really, every song Neal takes the slower, more nuanced approach with works on the album. The downside of this is that out of the 16 tracks on this thing, there are only seven that excel, and the bloated middle is just a mess.

Making a 16-track LP is basically creating a double album, and if you don’t have an established plan of attack to fulfill that huge feat, you’re always going to run the risk of filler, lack of focus, boredom, or lack of inspiration – the middle section of The 16 Deaths of My Master suffers from all of these issues. Some tracks come off unfinished, most feel bloated, a lot lack focus, and they usually don’t end with any fully thought-out structure.

I’m curious about Neal’s approach to making this album, as if maybe he took a similar approach to what The Knife did with Shaking The Habitual, in which they had improvised jam sessions and built off that foundation. But if Thief did take that approach, it seems to be working to the opposite effect. “Gorelord” is a good example. The track starts off promising, yet the direction curves off after an odd sample that feels overlaid and unnecessary versus blended, purposeful, and intuitive. The ending shifts from an 8-bit organ outro to a dungeon synth closer, sounding like he didn’t really know what to do or just didn’t care.

That sentiment carries over for the rest of the middle tracks. Nothing is really fun or interesting, and most really come off like filler more than anything else. The jumbled production and odd sample pairings don’t ever really land in experimental territory, and usually just end up being a mess.

The back end of this album actually redeems some of the questionable tracks. The instrumentals of “Life Clipper” set the stage to close things out, and “Cannibalism” and “Seance for Eight Oscillators” do a decent job of wrapping things up, with Neal slowing things down and not leaning into his worst impulses anymore.

I’m not really saying this album is not good, because really it’s a tale of two albums, and seven tracks work. I’m sure some folks will get a kick out of it, particularly mall goths, and maybe some folks trying to role play as goth-lite types after their initial reading of 50 Shades of Gray.  I’d be alright with listening to what Neal gets his hands on in the future, too. I just wish those nine tracks bloating the middle didn’t make it off the chopping block.