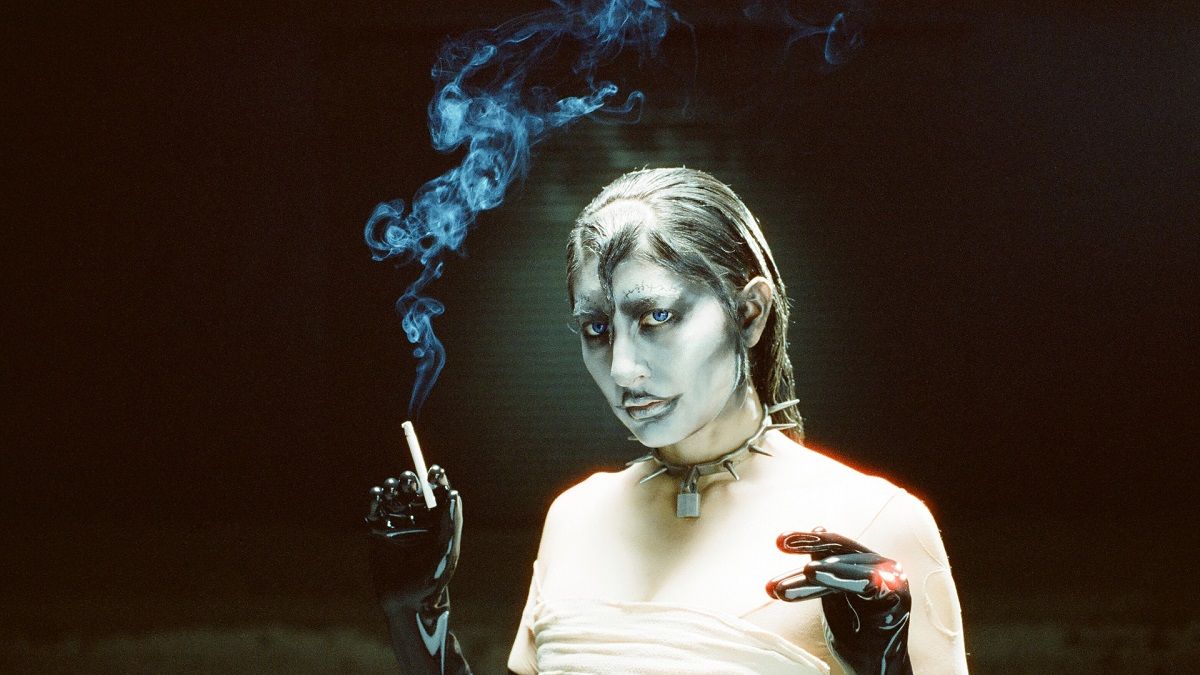 The second release from King Woman excels in its withholding, and boils in somber lessons of personal reconciliation.

Kris Esfandiari is a sonic shapeshifter. Every project she involves herself in is radically different from the last, always intriguing, and mostly always deeply personal. King Woman’s sophomore effort does not shy away from personal narrative, and with Kris at the helm you can always expect a unique and masterful presentation of a fully realized vision.

Celestial Blues utilizes its 9 tracks and 40 minutes of runtime restructuring Biblical stories and archetypes within a reckoning of Kris’ past experience with her religious upbringing. King Woman has always been a vehicle for Kris to explore various heady issues, never shying away from darkness of character, and representing whatever notion holistically in its various facets.

Kris’ voice ranges from weary, somber, angelic, frantic, sensual, angry, determined, ambivalent, and manic sometimes all within the same song. The instrumentation shines when sparse, playing off the negative space to ensure a dreadful doomy haze that lingers throughout.

All of this isn’t new to anyone who has followed King Woman since inception, however, there’s nothing bad about this either. With every track Kris works on, you get a sense that she’s always in full control; from the glorious covers she’s put out (“I Wanna Be Adored” as King Woman to “Firestarter” as NGHTCRWLR), to her multiple original material she funnels through her multiple other projects: NGHTCRWLR, DALMATIAN, Sugar High, and Miserable Kris will always deliver.

This assurance allows one to listen for glints of influence, and enjoy the unfolding of theater Kris employs to tell her stories.

Celestial Blues does a good job folding in various influences without drowning in them. Parts of this album sound like the gloomy folk of Mazzy Star and Jesse Sykes at times, and grungy doom similar to labelmates (and equally fucking awesome) Windhand, yet never flat out imitating, and also never releasing its grasp on the unique.

“Golgotha” is an up-and-down dreary bob that rhythmically moves like the waves of an ocean leaving a resonating exhaustion in the air. Kris’ black metal howls paired with her confident and woeful wailing gives “Psychic Wound” a visceral sensuality that presents a glorifying display of animalistic lust, which is demonstrably on full display in its video.

“Morning Star” leans in on its dark folk tendencies, but folds equal amounts of thundering doom instrumentation that bodes well to follow Kris’ lead, and match it with determined stepping stones for her to touch upon before leading along further into the dark.

Compared to the bleakness of Created in the Image of Suffering, Celestial Blues is definitely more bluish-black, harrowing along with healing, rather than psychodrama on full display. The sparsity works as reflective dark pieces sewn together in lieu of the shoegazy sonic proliferation of drowning Suffering utilized as well.

It’s all to wonderful effect, because at the end of day Kris just knows what the fuck she’s doing. Through her tenure as a musician Kris has leaned into a vision of her creation that only shines because she’s the force driving it. Her affinity for theatrical presentation heightens King Woman’s subject material from a simple doom record, to a forward thinking, multifaceted mixed medium that champions the healing power of embracing one’s dark side. In a subgenre that can become stale frequently this is an amazing feat, and I’m looking forward to whatever she gets her hands on next.