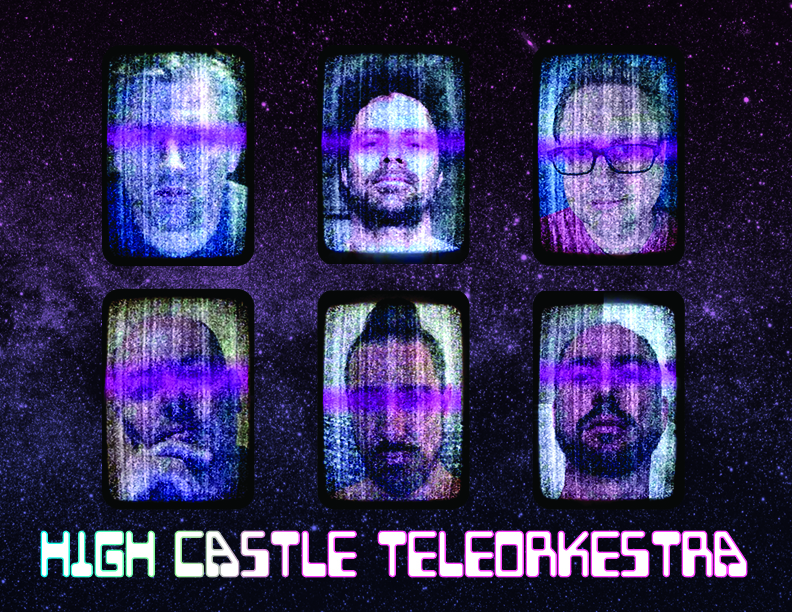 High Castle Teleorkestra unleashed upon us what is surely one of the weirdest albums of this year. It’s also one of the most impressive ones out there, so hold on tight, cause this is one wild fucking ride.

You know, whenever I hear about supergroups, I can feel my blood pressure rising (in a bad way), and I start to get snappy if I see too much hype around them. Why? Well, for the most part, supergroups ultimately turn out to be utterly disappointing, especially for fans of the bands that their members come from. Expectations are very high due to a certain pedigree at stake, and advertising always doubles down on a guaranteed wow factor. I guess it’s also due to the fact that musicians in supergroups tend to want to have fun instead of challenging musical paradigms, and that’s totally fine, too!

Anyway, my point with this preamble is that when I heard news of a thing called High Castle Teleorkestra, featuring members from Estradasphere, Mr. Bungle, Farmer’s Market, Umlaut, Probosci, I.S.S., Don Salsa, Traun and others, I was extremely skeptical, but held out hope. Then, as the press ball slowly started rolling, I saw that they were picked up by my all time favorite label Art As Catharsis, which was nothing but good news. The singles hinted at my hopes and expectations being met. And when I finally dug into the record, I was impressed. I mean, I’m not sure ‘impressed’ is even the right word; it’s more like ‘sonically shell-shocked’, to be honest. I was sort of reeling from my first listen, staring at the walls with a confused gaze, attempting with utmost futility to piece the experience together in my head and make sense of it.

The Egg That Never Opened sounds every bit as wild as it’s advertised/you hoped/ you can guess based on the singles. You usually don’t hear any influences or elements of the bands that the supergroup members come from; however, High Castle Teleorkestra is a prime example that this is not only possible, but is achieved without dive-bombing into a cacophonic mess. Stylistically, The Egg That Never Opened leans into jazz, classical music, progressive rock, avant-garde music, experimental music, metal, Balkan folk, and some other areas too, scooping out just enough to quench its thirst for variety before going on a cosmic rollercoaster ride where it spins so hard and fast that it just straight up regurgitates said sonic contents in the form of a neat, organic, and certifiably unhinged conglomeration of sonic madness.

Taking in the contents of the album as one uninterrupted listen is akin to somehow tripping on LSD and managing to go back in time and into the future, while also staying in the present – all at the same time. I know, I know, it may sound like I’m exaggerating for dramatic purposes. Trust me, that’s just not possible in this case. I actually feel like these depictions barely even cut the surface of what I’m trying to describe. As you can imagine, the vast array of musical terrain traversed translates into an equally diverse emotional landscape.

There are passages, as found at the very beginning of the opening title track, that hearken to a feeling of unease, obscurity, and general murkiness – retaining some of the general tonalities that are common within avant-garde metal bands. The latter half of “The Armachek Accusation” on the other hand exposits a very pleasant and almost suave texture, which is warm to the touch and gentle on the ear, caressing them with a smooth approach to harmony. Scattered throughout the course of “At Last He Will”, we witness some majestically massive moments extruded from a monolithic stream of sound that aim to impose on the listener with a larger than life demeanor. You can even experience the feisty and festive vibe of a traditional Balkan party throughout The Egg That Never Opened, but more noticeably in the closer, “Mutual Hazard”.

Of course, the dizzying amount of sonic variety is more than aptly represented by a smorgasbord of instruments and aural textures. That would’ve gone without saying, but I felt the need to outline it specifically as well. There’s practically a small army of people operating the layers of this musical mammoth. The final binding agent of this mélange, the production, is highly organic and fluid, offering the perfect contour to everything that’s going on. I think it will suffice to mention that High Castle Teleorkestra dropped the digital approach and ran their final mixes to JH110B ¼ inch analog tape, aiming for that analog dream.

You’d better be ready, because The Egg That Never Opened isn’t just any album. It’s an album that will demolish you, a transformative experience – if you will. If you were on the prowl for the ‘ultimate’ manifestation of modern avant-garde music that may also nod in the direction of its trailblazers, you’re right where you have to be. I’m not quite sure what to make of this album, even though I gave it well over a dozen spins. It’s a truly wild ride, one that’s sure to be rewarding for whoever has the willingness to accept such aural treats. What I can say for sure, though, is that High Castle Telerokestra‘s debut will be at a high spot on my personal year-end list.