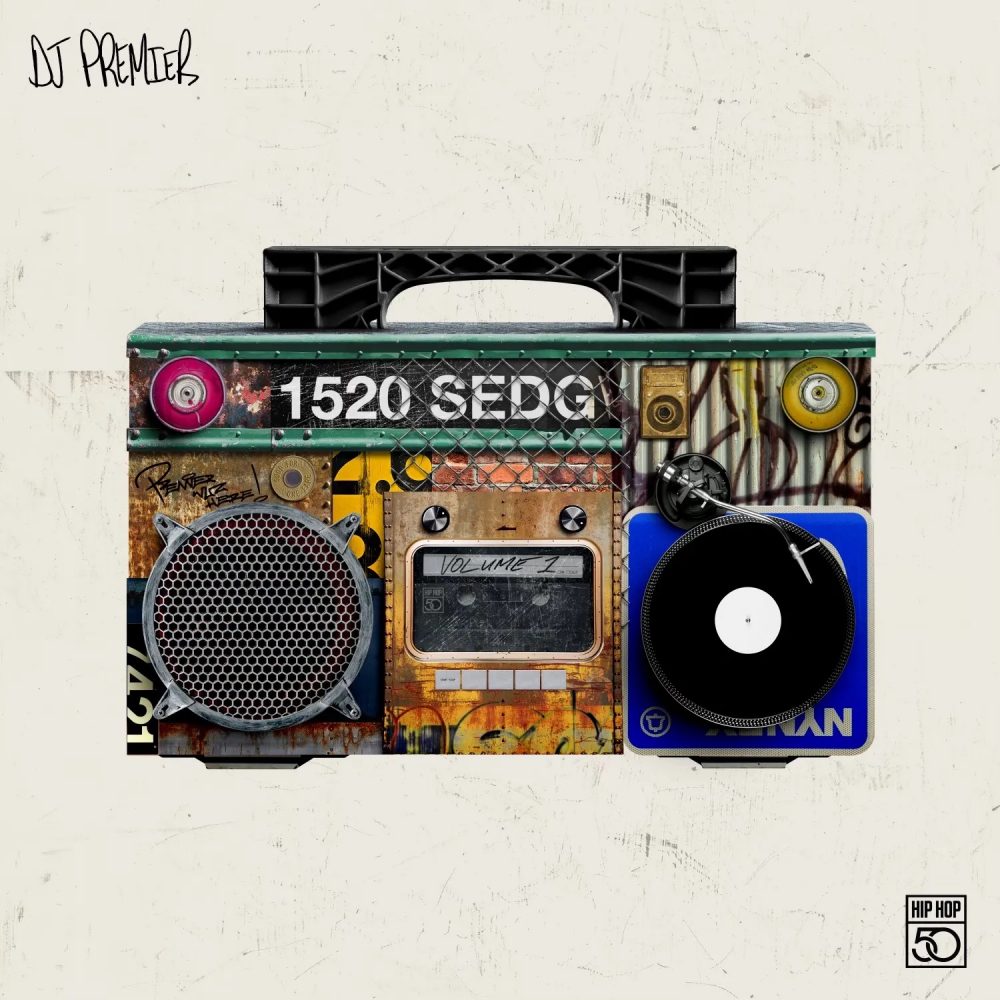 DJ Premier gave us 14 minutes of pure hip-hop bliss that completely changed my outlook for the genre this year, and I’m grateful for that.

This year has been a weird one for my relationship with hip-hop. I’m a devout fan, have been since I heard The Chronic in Houston when I wasn’t even old enough to understand whatever the fuck Dr. Dre and Snoop were rapping about. But this past year I kind of fell out of love with it. Of course, I followed the heavy-hitters; Denzel Curry‘s fantastic display of lyrical dominance on Melt My Eyes See Your Future, Vince Staples‘ smooth ‘fuck your bullshit’ delivery on Ramona Park Broke My Heart, Leikeli47’s fun as fuck Shape Up, and Kendrick Lamar‘s imperfection-as-a-muse audio diary of an album, Mr. Morale And The Big Steppers. Other than those four albums, nothing has really moved me this year. I completely lost track of Griselda output, and felt exhausted from trying to follow the oversaturation of releases from the power trio and their affiliates. I spent a shit ton of time catching up on the new-school mumble rap heavy-hitters, and identifying my favorites (Lil Baby, Future, Young Thug, and Gunna – also what the fuck is the first amendment anymore?), with no new or notable releases moving me the slightest.

Things felt more bleak, still, when Killer Mike dropped his new release “Run“, and although Young Thug took that beat and absolutely owned it, Mike seemed to have phoned it in compared to what we all know and expect out of the man. It prompted me to worry. Is one of my favorite rappers about to drop off? Does this mean Run The Jewels are going to go by way of Metallica? Will I ever hear another raucous hip-hop track that makes me want to just absolutely fuck shit up? I was lost. But then, one late night while I was on vacation, in the Everything Is Noise group chat, my hip-hop brother in arms David Rodriquez shared the link to “Terrible 2’s”. I had missed the news (if there was any) that RTJ  had something in the works with DJ Premier but was optimistic to give it a listen. Immediately when I heard that sample and scratch, I knew I was saved. Like a slap to the face my hip-hop curse was broken, and I was eager to give the release my full attention. What I found was a 5 track banger with 14 minutes of absolute goblin fire from some of hip-hop’s seasoned veterans; what a fucking relief!

Joey Bada$$ kicks things off with “Lettin’ off Steam”. The expansive beat that gives him the space to map out why he’s always been one to watch. I always forget about Joey, and always kick myself for doing it. Dude has always been a contender – he has been dropping fire since 1999, and nothing is different here. Breathlessly, Joey raps for over 2 minutes breezily. Premier has a penchant for bringing the best out of his collaborators, and nothing is different here. His production, scratches, and samples glisten with divinity. It’s a chill and laidback, optimistic beat that conjures images of Joey and Premier sitting in the back of the club like fucking bosses needing to prove nothing, but flexing anyway.

“Remy Rap” touts an interesting pair-up of Remy Ma and Rapsody. The beat is janky is as fuck, using a sample that I can only compare to the giant-ass springboard mushrooms from Sonic & Knuckles. Remy does a serviceable job (which is no surprise given her credentials), but sounds outdated. This verse would be cool as fuck in 2007, but sounds classic in 2022. Blame the internet, I guess. Remy gets a big ol’ pass, though, given she’s been locked up. Rapsody‘s verse is quite the opposite. Her flow is wildly unique, and so technically mechanical but vivid with detail. Every time I hear her rap, I feel like I’m listening to her restore a classic muscle car. Everything sounds pristine and tough. She’s constantly getting slept on, and all the true heads see her talent, which is why she’s on this EP in the first place. But how the fuck can you sleep on verses like ‘Daughter of a gun, I spit it like a bullet/That’s literary caution, I should win me a Pulitzer‘? It’s a travesty she’s not more well-known. Rapsody has put in so much work into crafting such a stellar and different flow. She deserves all the roses at this point.

Preem and Nas deliver an amazing pair-up in “Beat Breaks”, which has both veterans turning it back to the early ’90s to good effect. You never really have to doubt either of their output, and this track is no different.

The last two tracks are what I show the fuck up for. Killer Mike and El-P lay waste to fucking everything on “Terrible 2’s”. Competition between these two guys has always been a muse for them. Ever since their inception, Mike and El have always tried to one-up each other – it’s what drives these two to stay brilliant lyricists. They’ll always be challenging each other to do better, and the winner is always us. Mike usually dominates the slower beats. His Atlanta dirty south delivery always takes up the space needed to deliver slow roasting ferocity, and here he does no different:

‘The jewelry lifters, the sticky finger money-getters
Grimy as crime rhymers, find dining in dive diners
“Out of line, never mind”-ers, and fuck all you guideliners (liners)
That be playing squeaky clean, ’cause we dirty as coal miners (coal miners)
Getting head, blowing purple kush, smoke to the headliners
And if El say, “You dead”, then you dead, we bedtime you
Bedtimer then we leave Atlanta on airliner
Where they go? Who knows? Asia Minor or Carolina
Either way, promise po-po-pos will not find us
Different hoes, area code-code-codes, they will hide us
Different flows like a menstrual cycle, this is Michael
Sick psycho, I be feeling like life is a bit trifle
Big rifle, “Shh, don’t tell your enemy shit, Michael”
But I don’t like ’em, and I just wanna fight ’em, strike ’em and bite ’em
Hate ’em, bathe ’em in my gasoline dreams and just ignite ’em
Run the Jewels, we the terrible twos, so kids like ’em, yeah‘

Not to be outdone, El-P  takes the cake at this birthday bash, and proves why he’s nothing to play with:

‘Run the Jewels are creature feature
Come meet a couple dreamer deceasers
Ether breather, your grief is a sweetest treat to eat up
Cleanup crew to the leaders of all you Peter beaters
Put a POS in a team of weepers, your guap gettin’ seizured
From the top, I’m a tyrant, topple tons of these pussies
“Dead carpet event” attender, celebrity mushin’
You better off dead as a Harley varsity letter grade
I’m a “crime pays” believer-you heated? Invent a better way
Funny how you all tried denyin’ us ’til the climate changed
This type of consistent flame weapon-grade, never fade
Look at how we wrecked the game (ayy), don’t see it oddly
They want to Jamal Khashoggi me, they’re petrified I’ll never change
I’m rearranging that thing that you call a face
But fuck the law on Earth, run on up to the pigs’ space
We dangerous and we paid
This is a raid, better tuck the chain‘

His delivery and brutality just completely took me over, made me clench my fist, and just stay giddy as fuck listening to it. Premier’s production is flawless, the scratches are pristine, and that Drake sample is timely. This track alone tops my lists this year, and El’s verse is solidly verse of the year in my book.

The EP closer keeps the heat. With another wild-as-fuck team-up, we get Premier linking veterans Slick Rick and Lil Wayne for a stellar delivery over the subject of money. Slick Rick still delivers what he does best with smooth execution that feels like spreading butter on hot toast. He’ll forever be untouchable, sharing his coveted weirdo status with none other than MF DOOM (ALL CAPS). Lil Wayne  seems to be interested in fucking rapping again. His late-stage career output has been hit or miss, with a lot of misses, but this not-a-human-being Weezy F Baby shows us he can still have fun on the mic. Flipping the ‘no cap’ talk regarding the influence and power of money, Wayne delivers why he loves all things money. And, although I’m staunchly on the Slick Rick side of the debate, I cannot, nor will I deny those bars the finisher ends with. His absurdist take on the ‘brrrrrrrrrr’ ad-lib alone shows just how much fun this dude is having on the mic. I’m here for it, I’ll stay here for it, I’ll be ok to wait for more verses like this.

I don’t have much of a conclusion, other than to thank DJ Premier for giving us 14 minutes of amazing hip-hop that warmed my heart halfway through this year. Now it’s just back to waiting for Freddie Gibbs to drop SSS to solidify its top spot on my AOTY list. Luckily this EP makes it easy to replay, as I’ve done a dozen times already.