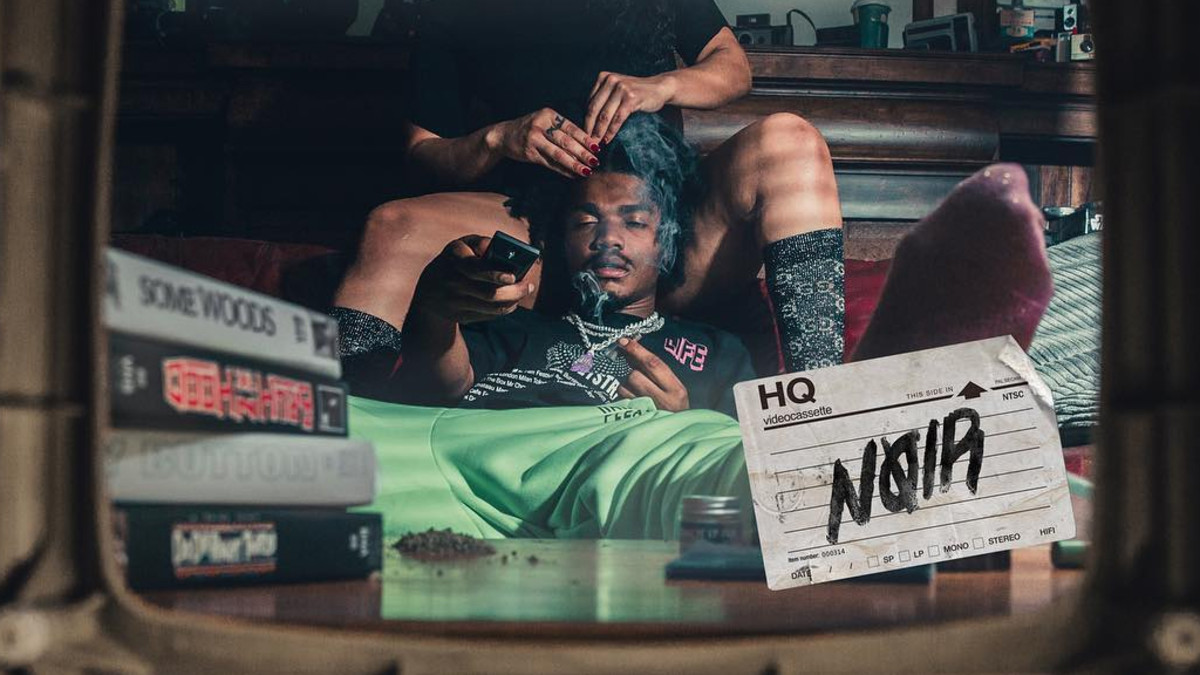 By David RodriguezDecember 9, 2018 No Comments

Smino overindulges in showing us what he is made of with NØIR. His versatile voice and production choices help us digest the plentiful bounty of tracks on offer.

I imagine the sound of NØIR is wildly indebted to not only the personality of Smino as an artist, but Chicago, the city he hails from. I’ve never been there, but I would like to think it has a high capacity for intimacy, as well as the rough attitude and an aesthetic a lot of urban areas exhibit. Denver’s like that, and I’m familiar with that city, as I live close to it. The first words you hear on NØIR, quoted above, are from Smino‘s partner, Jean Deaux. The words are in reference to Smino himself, spoken with ASMR-like gentleness and affection. They also function well as a parallel to the artist’s unique blend of hip-hop, soul, and R&B.

Much like walking down the blocks of a city’s heart, culture flanking you on each side, NØIR gives you a lot to think about. The execution brings all of its facets together, binding the music’s various approaches into one digestible ball of energy that hits you in your soul. “KLINK” provides visions of lights basking the concrete you step on as the sun retreats, inviting the freaks to come out. There’s a distinct swagger in Smino‘s vocal delivery. Listen to the hook as he throws his voice into octaves much higher than normal and descends back down for a memorable chorus that’s undeniably catchy. “TEQUILA MOCKINGBIRD” incorporates some reggae flavor while keeping with the tone that “KLINK” establishes one song prior. The alcohol referenced in these tracks paint a scene of excess, partying well into the dark of night.

“WE GOT THE BISCUITS” is the comedown, but later songs like “HOOPTI” retain more than enough energy to keep you moving. A slick piano line makes for a snappy groove that blends well with Smino‘s rapping cadence and the drums. We’re clear into ‘smoke and chill’ territory at this point; music you can vibe to, sit in the car with friends or someone you’ve had a romantic eye on for a while, and just exist in the moment. This lines up in “PIZANO”, where we see a confident double-time verse with braggadocio galore, as if Smino hit a blunt and started feeling himself. The clear standout track from the backend of the album is without a doubt “CRUSHED ICE”, which is a bass-heavy, sex-focused jam that slaps. The lyrics may be relatively shallow, but the production is anything but. If you have a good sound system, bumping this is a must.

I think my only issue with NØIR is that it’s a little long. Almost breaking an hour playtime at 18 tracks, it overstays just long enough to be a small problem. It also has enough common links between songs to make at least couple of them redundant. This really becomes apparent during the middle and tail-end portions of the album. I also think a couple more features from like-minded artists might have complemented the sound very well. Still, the stuff that stands out is very nice, as much a portrait of the hedonistic rapper/singer an artist as is the environment that birthed and supported him in this regard.

NØIR ends up being a smooth, robust journey that blends the melody of R&B singing and rap so prevalent nowadays, especially from the Windy City. Smino stands out by being a bigger personality than most, which shows in the watery and peppy production that he uses. He’s not afraid to play with his voice in interesting ways or incorporate a lot of influence and far-reaching elements to form a cohesive project. A solid effort, only held back by giving us a little too much!