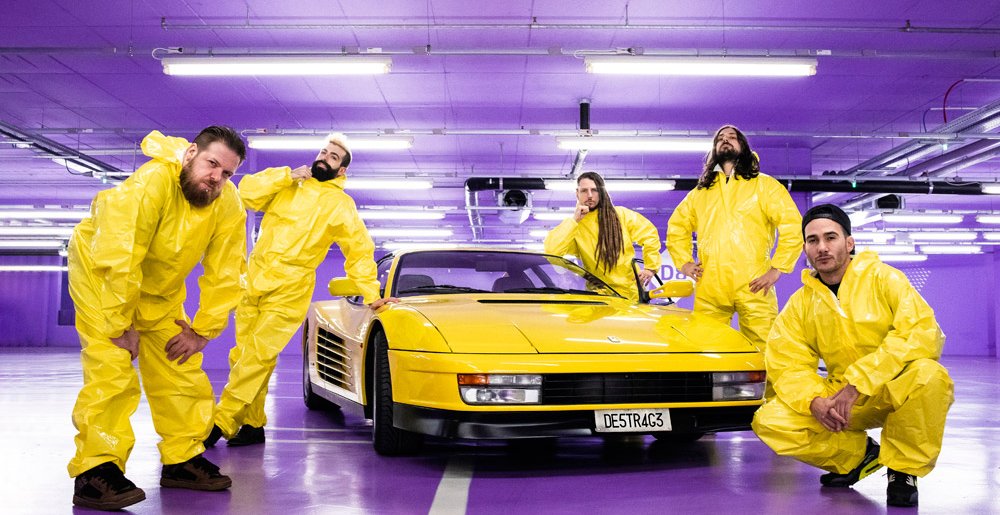 By Faisal BinzagrJune 8, 2019 No Comments

Italian experimental metal wizards Destrage return with their fifth studio offering The Chosen One, showcasing a new refinement to their creativity that sacrifices excitement for accessibility.

The closing strums of Destrage’s previous release, 2016’s ambitious A Means to No End, faded into silence with the guitar strings seemingly unraveling, leaving listeners on a cliffhanger: Will the music grow more epic and sprawling, or revert to the fun silliness of previous efforts?

Destrage are no strangers to these kinds of questions. Over a five-record career, the Italian five-piece have dished out chaotic, weird and sometimes stupefying metal that more often than not leaves you guessing. Working around a scoliotic backbone of mathcore and blues-tinged groove metal, these guys have woven in influences as far ranging as drum and bass, nu-metal, grunge, dubstep, 70’s prog and classical music, among numerous other elements. No two albums have ever been the same. So where does their latest release, The Chosen One, fit into the eclectic bigger picture of their fascinating career?

The album art is a fitting indicator. Streaks of different colors stacked alongside one another coalesce into the image of an anguished face. It’s organized trippy chaos. The run time of the record, comparatively brief compared to previous releases, clocks in at an efficient 37-ish minutes. ‘No bullshit. No half-baked or lukewarm stuff. No self-indulgence. No ‘Okay, let’s keep that because it’s pretty good and we’re friends’ weak ass attitude’ is how guitarist Matteo Di Gioia reflects on the band’s approach to writing the album, and it’s clear he speaks truth. Each of the eight tracks on the album are crafted to accomplish this mission, and each are colored by a different tone or theme, albeit structurally similar in length and essence. The result is a record that is both creative and eccentric, and at times frustratingly monotonous.

In essence, The Chosen One feels like a fitting epilogue to Means, rather than a straight-forward sequel. It carries forward its predecessor’s more mature sensibilities, distilling them into complex bursts of high-octane rock’n’roll catchiness. Gone are the proggy, almost Opeth-ian structures and darker passages of Means, now traded in for more straightforward driving rhythms and anthemic parts, although the songs remain punctuated by more reflective (and occasionally psychedelic) bits. The sillier side of their sound largely discarded on their previous release is now long gone, as are their more ambitious tendencies. You won’t be hearing any nonsensical throw-down anthems, Mariachi segues, or sprawling musical storytelling here. They’ve streamlined their core sound into something more digestible and accessible – retaining their technical complexity within simpler and catchier rock structures, in many ways reminding me of System of a Down. Not so much in sound, but in their attitude and approach towards music. Whether this is a positive change depends on your personal tastes.

And while I personally enjoyed the sound they’ve established here (particularly the improved production, and mixing courtesy of Josh Wilbur), I felt something was lost in the shorter run time and streamlining of their sound. While each song carries its own flavor, the similar run times and approach to pacing across the tracks results in a dense listening experience that softens some of the edge, making for an occasionally exhausting journey as the tracks start to wash into each other. More frustrating still are what felt like occasional recycled ideas from previous outings peppered throughout the songs – a prominent example being the melodies toward the end of The Gifted One, which strongly resemble those on the bridge of “Peacefully Lost” off of Means. Interestingly, the lyrics here even reference Means, and as such, this could be looked at as more of a deliberate callback. Regardless, the idea of The Chosen One functioning as an epilogue to Means is only bolstered by such moments, particularly in the context of the record’s overall briskness.

However, what this does is allow the moments that deviate from the formula to shine even brighter. Highlights include the passionate dreaminess that closes the second track “About That,” the sticky Meshuggah bounce at the core of “At the Cost of Pleasure,” the menacing urgency of the ascending riffs that shimmer to a climax at the end of “Mr. Bugman,” and the unsettling industrial bloops of “Rage, My Alibi.” These are brilliant, fun moments, of which there are many others that make The Chosen One a must listen, despite some of its shortcomings.

Ultimately, fans of Destrage will almost certainly like this record, as I did. Many of them will love it. With its finely tuned balance of heavy technicality and mainstream gloss, newcomers will likely find this to be their most accessible release yet. What’s more, is that this time, it doesn’t feel like a cliffhanger. It seems Destrage has found a comfortable groove, and the future can only go two ways: more of the same, or another sharp turn into strange and untrodden lands. It wouldn’t be their first time.